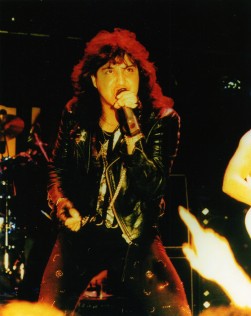 Over 30 years ago Lou Taylor was vocalist for a number of British Heavy Metal bands notably, Saracen, Satan, Blind Fury and Persian Risk. He recalls a story from the 1980’s with a link to Metallica…

‘When we were rehearsing in London Bridge Studios we were visited by the boys from Metallica and went on a couple of binges with them. One night our guitarist Russ Tippins went out drinking in London with their guitarist James Hetfield.

I was told that we received a phone call from the police saying can you come and collect them because they were locked up in West End Central police station, they had been playing guitar on top of the canopy of Piccadilly Theatre.

It was curious that time when I met the drummer Lars Ulrick he said I’ve met you before Lou, but I’ve never been to San Francisco, he said I’m not from there I came from Denmark originally and a few years ago I came to Tyneside to watch Raven and other Heavy Metal bands.

I remember speaking to you when you were in Saracen actually that night you were operating the lights at a gig in Newcastle, think it was for Raven. I was chuffed he remembered’.

Who were your influences and how did you get involved in music ? ‘It was seeing Ronnie James Dio and Rainbow at Newcastle City Hall in 1976, knocked my head off. Went to see them again in ’77 and that’s where I made my decision, I would love to be able to sing like that guy up there, on that stage, blew me away.

I got a knock on the door from guitarist Steve Dawson who said I heard you can sing, well I don’t know if he’s being hanging outside my bathroom window, but he said why not come down and have a bash with us.

We rehearsed at Redwell School in South Shields and I couldn’t hear a single word that I was going on about but suddenly I’m in a band.

So we started Saracen and I don’t know whether there had been a void in my life but everything I breathed, touched, lived, everything I had to do was something with this band. Steve was a fantastic guitarist he knew the business so we started gigging in the neighbourhood’.

‘I saw lots of bands doing little venues and I had all these visions of grandeur. I wanted lights, smoke, I was fascinated with the show and the whole spectacle of the thing. I thought why can’t we do something like that we really needed to start banging the drum for this band.

I got myself a job at Sound and Electronics in Newcastle, got a load of gear off them on the cheap and started putting on these light shows with bangs and flashes so people didn’t come along just for the music they also came to see what this show was all about’. 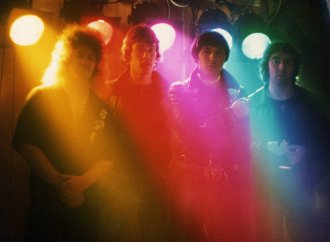 What venues did you play ? ‘It all seemed to be going a little bit rapid partly due to the deception by myself generating all this promo and some of the venues that the other bands were supporting at, we went in there as headliners.

We got gigs at Mayfair Newcastle, Mayfair Sunderland, we got down to Shildon, Whitley Bay.

Along with other bands around like Axe, Mythra, White Spirit and Tygers of Pan Tang we were making a lot of noise in the area and turned some heads’.

What were your experiences of recording ? ‘One day we got a knock from a fella who said I’ve got a recording studio in Durham and we can do some business for you. In walked Terry Gavaghan. In fact it was the same studio that South Shields bands Mythra and Hollow Ground used.

He said I can do this record for you, get you gigs, you’ll be on the radio, come down to the studio record a few tunes and all it will cost is £200.

He said it was going to have all the big names of the North East on the album, I was quite flattered. I saw it as moving up to the next level and felt excited to be in the studio and something happening for Saracen.

When we went down we first drove past the place and double backed on ourselves to find it as it looked just like an ordinary house, later we found it was two terraced houses knocked into one. But yeah it was just on the main street in a little town in Durham called Pity Me.

I can’t remember much from the sessions apart from recording my vocals quite late at night and the drum booth being tiny. When Dave was behind the drums we had to pass him refreshments every so often as it was such a tight squeeze to get in or out so he stayed on the stool until he finished his parts.

Terry was forever nipping out of the studio and coming back with a smelly cheese sandwich or something else to eat, and he loved to talk about the resident ghost – he had a string of yarns that could strangle the hulk !

On reflection we might have been better off recording at NEAT, as they were more loud and proud, you know the whole crash, bang and don’t forget the wallop.

But out came this album that Terry produced called Roksnax. Now it’s not the worlds number one album but everyone involved in it will agree that it is a wonderful feeling and something special about getting your name on a piece of vinyl.

Terry was true to his word and got the album in the shops. I bought six of them straight away!’.

Did you get offers from any other bands ? ‘It was late ’82 when I went for an audition to be the vocalist of Samson. To cut a long story short I didn’t get the job, but here’s the story anyway.

Samson had already released a couple of albums and were playing regular UK tours many of them as support. But unfortunately just as they were going to sign a major record deal with A&M their frontman Bruce Dickinson had just got a dream job fronting Iron Maiden, and look what they have done!

Maiden had also released a couple of albums and toured extensively with the likes of Kiss, Judas Priest and The Scorpions. So both bands were nearly head to head really as far as career progression goes.

I’d say the strength of their management team was behind a lot of this, management pushed harder so Maiden were becoming more established and Samson had a few problems with theirs. Maiden were tipped to really go places and they chose Bruce to take along with them.

Back to the audition, I went to see the Samson new manager, Terry McClennan at Musicworks Studios in London, we went through a few songs, with the main man in the band, Paul Samson, listening in the background. I got positive notes from Terry McClellan but I got word that Paul wasn’t keen.

Problem was my vocal style, it is a bit similar to Bruce and every time he heard me it reminded him of their former singer which didn’t go in my favour after what had happened.

It probably felt like another stab in the heart really as Paul had worked so hard to get Samson to where it was and he would have felt the A&M deal was the final push needed to go on and headline their own shows.

Now Paul was a great blues, hard rock guitarist rather than straight ahead heavy metal and eventually he went with a guy called Nicky Moore whose vocal style was more suited to his guitar work.

But in the end they still got a deal which I believe was with Polydor records’. 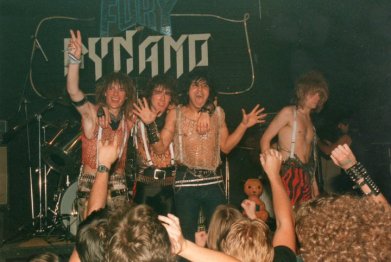 Have you any stories from your gigs ? ‘After playing in a few bands on the London circuit, like Angelwitch, I moved back to the North East and joined Satan, and listening to them, boy they were tight, really sharp. We recorded a few bits and pieces then jumped on a ferry to do some gigs in Holland.

We took this thing around Europe and by then the whole British Heavy Metal scene was red hot so it was one mad scene of gig here, gig there and everywhere we went was a bit wildness, a bit debauchery, some stories you can’t tell. But we had a great time.

When you’ve played the Royal Standard in Walthamstow in front of fifty people and they aren’t interested, then you get out here where they are running after your car, sign my booby and all that, you really think you’ve made it, that’s gonna turn anybody’s head…and it did’.

PART ONE of an interview with Lou Taylor. Taken from the documentary We Sold Our Soul for Rock n Roll also at The Word, South Shields 26th January 2017.