On the eve of the release of their new album on the 21st April on High Roller Records, I spoke to Cloven Hoof bassist Lee Payne ‘We are just about to release Who Mourns For The Morning Star. This new album explores the full sonic width of the band. There are epic tracks next to more hard hitting numbers that build and cover a whole spectrum of moods and atmospheres.

The album combines all the best qualities of the trademark Cloven Hoof sound played with precision and feeling with a vocal delivery that is off the scale. I feel it is our best ever album that we have done and really stretched ourselves on this one’. 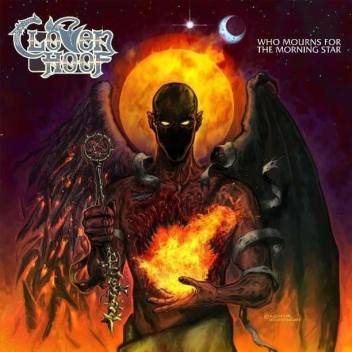 Who were your first influences in music ?  ‘The 70’s was a very good decade for me and I spent every penny I had buying albums and listening to music. Over the years I saw hundreds of metal bands. The first live show I saw was Rainbow at Birmingham Odeon in 1975, then Black Sabbath on the Technical Ecstasy tour in 1977.
For influences I thought Cream were great and I loved Alice Cooper but I always go back to the old tried and trusted favourites like Black Sabbath, Deep Purple, Led Zeppelin, Thin Lizzy and Rush’.

Was there a defining moment when hearing a song or watching a band when you said ‘I want to do that’? ‘I got into music because of Highway Star by Deep Purple. I heard that song and it hit like a bolt of lightning. I was an immediate fan, no question about that. I knew I just had to learn how to play it! First I learned it on guitar then switched to bass because I wanted to play with Ritchie Blackmore one day haha’.

‘I started Cloven Hoof way back in 1979. It was a fantastic time for me growing up in England at a very exciting time in metal history. Everyone would go anywhere to see a live band and with the British media supporting Heavy Metal it was an inspiring time.

Geoff Barton, who formed Kerrang magazine, was the most important writer at the time. He worked for a music paper called Sounds and all the metal kids bought it. Even before we had a singer I sent a tape to him asking what he thought of the music. He loved the fledgling Cloven Hoof sound and when we eventually got a singer I went down to London and was interviewed by him.

It was very prestigious and that gave Cloven Hoof respect even from day one thanks to Geoff. He tipped us for success in his Breaking through in 82 article along with Motley Crue and Venom’.

What venues did Cloven Hoof play ?  ‘1983 saw Cloven Hoof touring throughout the length and breadth of the UK, earning ourselves a sizable underground cult following. In the summer of that year the band recorded a four-track session for Tommy Vance’s Friday Rock Show on Radio One and a similar session for a local radio station for DJ Mike Davies. Things were starting to happen for the band, we were really in the mix’.

‘On the strength of the bands popularity Tyneside based Neat Records signed us to record the album Cloven Hoof. The album notched up figures of 24,000 units in 1984 alone. And off the back of some very successful overseas sales a European tour was organised. The tour was great and it culminated on the Shockwave Festival in Belgium.

The Dynamo Club in Holland was another good memory of the gigs abroad. These venues provided some of the most enthusiastic Heavy Metal fans we had experienced. The reaction from the crowd at the end of the set’s was astounding.  A big highlight of our recent gig history was playing on the Sweden Rock Festival in 2014 amongst Heavy Metal greats such as Black Sabbath and Alice Cooper’.

What were your experiences of recording ? ‘In the old days we used Mad Hat studio in Wolverhampton. I recently saw our old producer Mark Stuart and we had a great time reminiscing about A Sultans Ransom which we recorded in 1989. He agreed that it was a killer album and he was proud to be part of it, I think we all felt that. For our recent recordings we have used a variety of studios for putting down base tracks’.

‘We are with High Roller Records now and are really happy with the relationship, they care about metal and nothing else. They have some awesome names on their books Onslaught, Witchfynde, Exodus, Tokyo Blade to name but a few, we are in great company!

High Roller have been good to us, they were responsible for releasing Eye of the Sun for the first time on vinyl. The album was previously available only on CD but now it will be available on both formats and downloads. Through High Roller we also have access to one of the most respected audio engineers in the shape of Patrick Engel. He is an absolute wizard, when we got sent the final mix for approval – it was jaw dropping’.

What’s next for Cloven Hoof ?  ‘We have a few gigs already confirmed this year, we can’t wait to take the new material on the road. On 25th August we’re playing at the Blast from the Past with Riot V in Belgium and the next day we’re at the Trueheim Festival in Germany. Then it’s the Britsh Steel Festival in October and we are hoping to get a few more confirmed for this year, can’t wait. Music is my life.