John Roach is guitarist with UK Heavy Metal band Mythra. On the eve of the release of their new album he took time out to reveal where it all started…
‘Around 1973 I used to go to Saville’s Music shop in South Shields on a Saturday afternoon to look at the records, and where they displayed guitars. I particularly remember the Silver Sparkle of a Burns Flyte gutar that was in the window. Another source of inspiration for our musical fantasies was a furniture shop that sold Hammond Organs. We read leaflets from Yamaha and the Bell Musical Instrument Catalogue, I mean this was musical equipment pornography haha.

At that time, I had an Audition electric guitar and 5 watt amp from Woolworths. I quickly grew out of that and it was replaced with a second hand Les Paul copy. It got serious though in 1975 when I met Maurice Bates who played guitar. He had a Mackay 100 watt Amplifier and a 4 x 12 cabinet!

It was then that we formed a band, with original bassist Peter Melsom’s friend Kenny Anderson on drums. He was a reluctant drummer, in fact he bought a pair of drum sticks and used to play them on anything hard, technically he was what we called a fireplacer, he rattled away on anyones mantlepiece ha ha.’

Where did you rehearse and when did you start playing gigs? ‘Once I had bought some decent equipment, thanks to my Dad, an Orange Graphic 120 amp and Vox 4 x 12 cabinet the four of us started rehearsing upstairs in the Lambton Arms pub in South Shields. We were called Zarathustra at the time and Maurice was the singer, in true Steve Marriot style.

We rehearsed there for about a year working out songs and finding out how to be a band. It was at this time that we really committed to the band as we invested in a HH PA system and a Bedford van.

Through mutual friends we went to see a band called Highway or Freeway at a youth club the singer was called Vince High. They played some Free covers and Wishbone Ash. I can’t exactly remember how it happened but Vince joined us and we became a five piece. Coincidentally Vince and I both worked for Swan Hunter’s at the same shipyard in Hebburn.

We tried another drummer Barry Hopper, he joined and we became Mythra. Our first couple of gigs were in youth clubs and then Maurice and I went out looking for an agent. We went to Ivan Birchall who had an office in Newcastle, he put us on his B list and we got loads of work in pubs and clubs all over the North East.’ 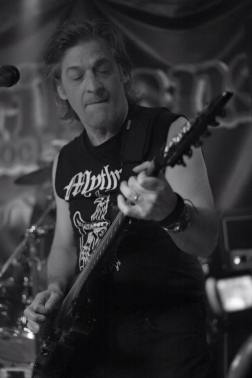 What venues did you play ? ‘I think we got a lot of work because we wanted to play all the time, we got short notice gigs where other bands cancelled. We played Saturday afternoon spots in the Old 29 pub in Sunderland. One of the things we had going for us that other bands didn’t, was a light show which Lou Taylor had built. (Lou went on to become frontman for Saracen, Satan and Blind Fury and features in a two part interview Rock the Knight Feb.26 & March 5th).

For our gigs it seemed that every time we picked up Lou in the van he had more and more lighting equipment.
For a short time the local council hired out the Boldon Lane Community Centre and we played a few gigs there with fellow South Shields metal band Hellanbach. We had originally tried to hire the Bolingbroke Hall but that wasn’t available, I think punk band  Angelic Upstarts might have put paid to that venue.

A weird gig was at a club on the seafront in South Shields called the Shoreline. It was a late 70’s disco. We were a young heavy metal band playing Sabbath, UFO, Motorhead covers and our own original material. I don’t think the crowd knew how to take us.

I remember we were playing a gig in a workingmen’s club and the Concert Chairman called us on the phone to tell us we were too loud and to turn it down…thing was that the phone was on the stage! Now more recently with Mythra the gig stories seem to revolve around food varieties and quantities’. 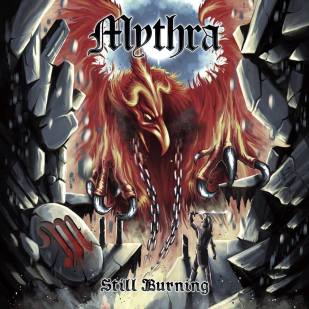 Where did you record the new album ? ‘For Mythra’s most recent album Still Burning we went to CP Studio in Poland. We started to write new songs and within a few months we had 13 songs which we whittled down to 12 which were recorded. The drums were done in two days with all of the guitars including solos and harmony parts, over the next four days. We then did the vocals and the bass.

We all played live and for practical reasons recorded the drums and DI guitars then we replaced the guitars one at a time and then the vocals and finally the bass. It was a lot of fun recording this way. We’re very pleased with the result it shows that there is life in the old dogs yet. The album is called Still Burning and demonstrates that Mythra still have the ‘FIRE’.

What have Mythra got planned for the future ? ‘Mythra got back together in the summer of 2014 to see if we were any good. We were and we’re still here. Since our first gig in nearly 30 years in February 2015 we have recorded 17 new songs for two different albums.

We’ve played in the UK, Germany, Spain, Belgium and have gigs planned this year in the UK, Greece, the Netherlands and California. Internationally, the interest and reaction to our gigs is great and we’ll keep going as long as that interest is there. I think for all of us in Mythra the best is yet to come’.