‘Now we liked having a few explosions going off during our set you know, flashes, smoke bombs the whole lot. Well we just got on stage in Newquay, first few bars of our opener and a pyro went off between my legs…I almost became Danielle haha’.

‘I’m sure you are well aware that Metallica were big fans of all things NWOBHM and in the early days they used to open their show with the Weapon song Set the Stage Alight.

So when Metallica drummer Lars Ulrich and record company Vertigo were putting together the compilation album New Wave of British Heavy Metal ’79 Revisited, he insisted that Set the Stage Alight went on the album.

Nobody from Vertigo called the band but they did contact Virgin Publishing who owned the rights to the song. They in turn asked our permission which, of course, we gave.’

‘We are delighted it made it onto the LP. We are very, very proud of the song, written by guitarist Jeff Summers, and we think it’s stood the test of time.

As I said Metallica used to open their show with the track so it was very influential to them. So much so that they ‘borrowed’ the beginning of it for their song Hit the Lights. In the very near future we have some really exciting plans for that track’.

Who were your influences in music and was there a defining moment when you said ‘I want to do that’ ?

‘Probably the first time I saw The Small Faces on TV. I became a huge fan of Steve Marriott who I thankfully got to meet a few years before his untimely death.

Influences ? It’s got to be The Small Faces, Free, Led Zeppelin, Aerosmith and Tom Jones to name just a few!’

‘After my move from Dublin in the 70’s I lived in Birmingham for five years where I began my musical career playing lots of social and working men’s clubs in and around The Midlands. Also played local rock venues like The Railway and Bogarts in Birmingham.

Then I moved to London with my mate Baz Downes, and we formed Snatch. Other members of that band included guitarist Bob Angelo and the late Daryl Read on drums. Bob had also played with Iron Maiden and Praying Mantis.

Snatch played all the usual London rock joints but folded after about a year as we just couldn’t get a record deal. Then in March 1980 I put an advert in Melody Maker magazine and through that met guitarist and vocalist Jeff Summers.

We formed Weapon, signed to Virgin Publishing and supported Motorhead on their 32 date ‘Ace Up Your Sleeve’ tour. Culminating with four sell out shows at Hammersmith Odeon. We were on our way.’ 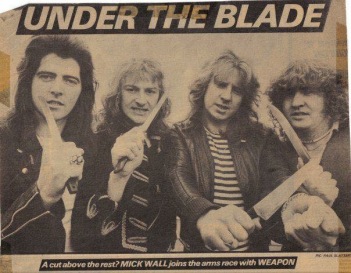 ‘I can’t remember the name of the studios where we recorded the first Weapon demos but once Virgin showed interest they gave us time in their demo studio which was on board The Barge in Maida Vale, London.

We then signed a five year publishing deal with them and recorded more tracks at The Manor Studios in Oxford which was Richard Branson’s country home. We also recorded at The Townhouse Studios in Shepherds Bush, London.

Everything was looking up, it was all looking good, but as happens with a lot of bands it took a bad turn through lack of record company support. It all came to a head and ended with Weapon calling it a day in 1982’.

Have you any funny stories from playing gigs ?

‘We were at Edinburgh Odeon on the Motorhead tour and had just finished our sound check. Jeff and Baz went to the side of the stage to tune their guitars when the cables on one side of the Bomber snapped sending it crashing through the flight case that the tuners were mounted on. An inch or two closer and we would have lost two members of the band!

Once we were playing a gig in Stoke and the stage was very low, I walked towards it through the dry ice, tripped and went head first into the drum kit… Happy daze!’ 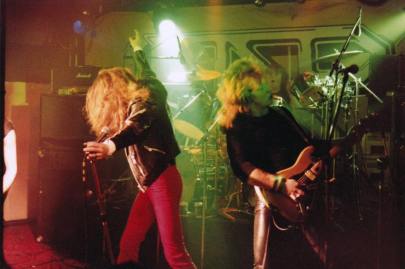 Have you any plans for Weapon in the future?

‘Weapon UK, as we are now known for legal reasons, are still very much involved in the music business. During the past few years we have played shows in the UK and all around Europe and another tour is planned for September this year. We are also on the bill at the two day Grim Up North festival in Bury.

On the recording side we have a new single coming out soon and very shortly we will start work on the new album at Scream Studios in London. Yeah the future is looking bright and busy for Weapon UK !’

All the information on tour dates, record releases and back catalogue is available through the official website http://www.weapon-uk.com