Mythra bassist Maurice Bates talked ahead of playing on the Up the Hammers Festival in Greece on May 27th ‘It was great when we reformed Mythra in 2014 and now we’re just enjoying the ride as they say’.

How did you get involved in playing music and who were your influences?
‘When I was 12 years old my parents sent me to a guitar teacher to keep me out of trouble. My Influences were The Beatles, Kinks and The Who, then got into heavier stuff like Sabbath, Judas Priest and Rush, that stuff packed a bit more of a punch.
Me and some friends formed my first band Revolver in Newcastle and played Beatles songs. We played our first gig at school when I was 13. We auditioned for the TV programme Opportunity Knocks, we played in front of Hughie Green, but sadly we weren’t successfull haha’.

How did Mythra get together? ‘When I was 15 I met John Roach, Peter Melsom and Kenny Anderson. We formed Zarathustra and rehearsed in St Hildas Youth Club or sometimes the Lambton Arms, South Shields. We started playing gigs at youth clubs around South Shields. We went through a period of changing members and brought in Barry Hopper on drums, he was originally in Obilisque. Then Vince High was brought in as the singer and it was at this point we changed the name to Mythra’. 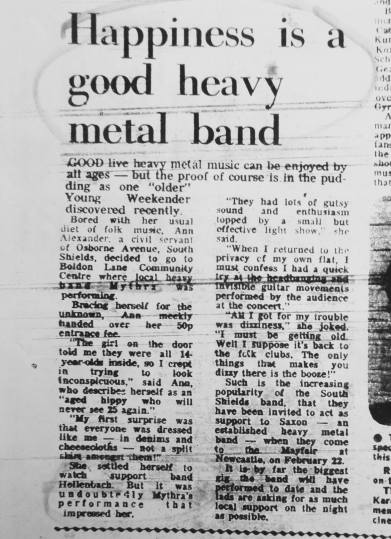 ‘We started playing the social club scene around the North East where they would have rock nights on. After the gigs we’d pick up the cash then on the Saturday take it up to Newcastle where Ivan Burchall had his agency, he would take his cut. He’d also sort out the next weeks bookings, the same for the Mel Unsworth Agency and a few gigs through Beverly Artists in South Shields’. 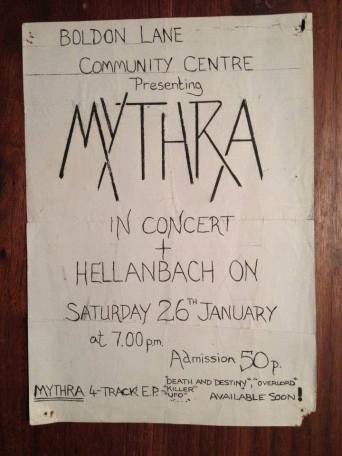 ‘I remember playing at Boldon Lane Community Centre in South Shields around ’79 we had Hellanbach as support, to publicise gigs we used to get out on the streets late at night with a bucket of glue and paste up the posters in bus shelters around the town, it was a right laugh and it done the job to get the word around for the gig. Hundreds turned up. It is very different now using social media where it can take a few minutes to advertise a gig’.

Did you ever think of basing the band closer to the capital ? ‘There wasn’t much discussion about basing the band in London cos we had regular gigs all around the North, we worked really hard and had fairly settled lives, we just needed a few more Bingley Hall type gigs to get noticed but sadly they never happened’.

Have you any stories from gigging ? ‘We supported Saxon at the Mayfair in Newcastle and were surprised to find them drinking tea instead of alcohol, they had their own industrial water boiler. We thought this was a great idea so we copied them and always carried a baby Burco water boiler to gigs to make our coffee and tea. So much for sex, drugs and rock n roll eh !

We once played the Old 29 in Sunderland and our friend Lou Taylor was the lighting guru, he was like a sixth member of Mythra then, and to his mothers dismay he made all the lighting rigs for our shows in his garage and bedroom.
On this particular gig he let off a smoke bomb which gave off so much smoke the pub had to be emptied. Another time I managed to get hold of an aircraft landing spotlight. When it was turned on and pointed at the audience it was so powerful it blinded everyone in the room, it was like looking into the sun haha’.

What were your experiences of recording ? ‘The first recording session was a new experience and opened our eyes to another part of being in a band, to be able to hear a finished track was brilliant. The first recording we done was the Death and Destiny EP in 1979. We chose Gaurdian over Impulse Studio basically because of the price, plus you got a better deal for reprinting the EP so we went there.

The owner Terry Gavaghan was more of an engineer than producer, he just said to us no slow songs lads keep it up this is good ! We slept upstairs to the studio so we could get on with recording straight away in the morning. But as we were recording our own bit separately you know, guitars, bass, vocals, everyone else had to leave the studio so we ended up in the pub! Happy days’.

What are you doing now and are you still involved with music ?
‘We reformed Mythra in 2014 and we have just released our new album Still Burning, and  getting ready to play a heavy metal festival in Athens…that’s not bad’.