747, Wheels of Steel, Heavy Metal Thunder, Never Surrender, And The Bands Played On are just some of the Heavy Metal anthems recorded by Saxon during the late 1970’s and early ’80’s.

After the band split up, original members Graham Oliver and Steve Dawson formed their own version of Saxon. Here Steve talks about those early days and how he is still enjoying the music biz.

‘Looking back on my career so far I’d say my proudest moment was the first time going on Top of the Pops with Wheels of Steel and my mother finally accepting that I had got a proper job!’

Who were your influences and what got you playing music, was there a defining moment of hearing a song or watching a band when you said ‘I want to do that’ ?
‘What started it all off for me was listening to The Beatles – Day Tripper and Last Train to Clarksville by The Monkeys’.

The New Wave of British Heavy Metal, what was the feeling betwwen Saxon and Iron Maiden who were leading the charge, and did you realise how influential the movement was on bands like Metallica ?

‘Of course we did many shows with Iron Maiden, loved them all. And bands like Vardis, Samson and the Tygers were around then.

We didn’t think too much about the future, we were just going for it you know, to be honest we were just happy to make it to the next week !

As far as Metallica goes I remember first time coming across them when they supported us at the Whiskey A Go Go in Los Angeles.

It wasn’t until much later that we heard Metallica were heavily influenced by Saxon, the drummer Lars Ulrich came out and said that. It’s nice of him to acknowledge our influence but we didn’t know about it really we were just playing the music we loved’.

Have you any memories of the day’s when Saxon played on the bill of the Monsters of Rock festival in 1980 & 1982 ?

‘First time in 1980 we were playing with so many of our hero’s. We were listening to records like Killing Machine by Judas Priest and Long Live Rock n Roll from Rainbow and here we are on the same bill!

We just hoped we got through the set without making any mistakes. At that time it was the biggest crowd that we’ve ever played, so you could say we were a bit nervous’ ! 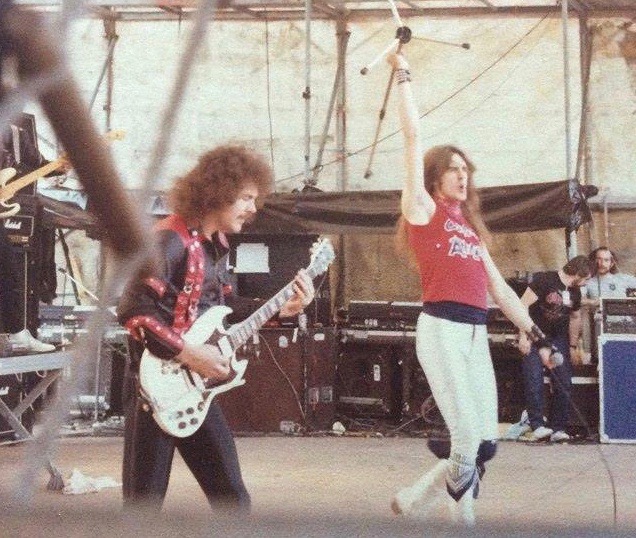 ‘In 1982 Gillan were on after us then Status Quo were headlining. Anvil and a few other bands had been on before us but it was over very quickly and at the end we got a good fee for playing, so that turned out to be a good day’s work’.

Is there a commaraderie between musicians when you are on tour ?

‘We are all in it together, and we are just musicians at work having a great time. Unfortunately there are some arseholes in the music biz so it’s best to keep away from them as much as you can.

You never stop learning in this job and we are forever grateful that we can earn a living doing what we love’.

Does your experience of the early Saxon days help you enjoy performing now ?
‘You know life on the road is one big adventure and like all musicians we have stories from the road.

When we are together we can talk for hours about the laughter, the tears and the heady nights so this is a nice lead into telling you Graham and I have a new book coming out, called Saxon Drugs and Rock & Roll, the Real Spinal Tap.

It’ll be packed with lot’s of stories of life on the road, so that’s one to definitely check out soon on Tomahawk Press’.

(The 1984 mockumentary Spinal Tap was based on Saxon, plus a few other bands have claimed an influence on the film which follows a fictional British Heavy Metal band on tour. The writer Harry Shearer went on tour with Saxon and took notes which formed the basis of the script for the film.)

What has music given you ? ‘Music has given me a good job that I love, lots of great times, and more sex than I could have wished for. Oh and a failed marriage’.

What are Oliver/Dawson Saxon planning for the rest of the year ?

‘Later this year we are recording a new album, we have a few idea’s for that already. It’ll be produced by the band and Paul O’Neill in his Wigan studio. We are keeping the same team together who recorded Motorbiker in 2012 because that went really well.

We’ve also got load’s of shows this summer around the UK and a few festivals in Europe like Stormcrusher in Germany, British Steel Festival in France and November we’re in Holland. It’s hard work but we love it’ !

With that Steve is off to work to put another rock n roll shift in.

All tour dates and information available on the official website http://www.odsrock.co.uk