Neil Newton is a musician based in the North East of England. For 11 years he was guitarist for Angelic Upstarts. Here he looks back on his career and where it all began…

‘It all started off with Wizard and The Sweet, my earliest memory as a kid is seeing Roy Wood’s geet mad hair and makeup and the music just hooked me even though, at 5 years old, I didn’t understand why it appealed but I didn’t care, those songs and images were fucking great’.

‘A few years later Punk came along and that was it, I had already been primed for Punk by listening to the Glam Rock bands and the impact on me was massive. I loved the energy, the anger and lyrics being spat out like venom, fucking incredible and Punk still does that to this day, it still makes the hairs on my arms and neck stand on end’.

‘Punk music did so much more than influence me musically though, it shaped my whole attitude to the world in general and it was a local Punk band who brought everything into focus about just what it was that punks were angry about. The Sex Pistols were writing about Anarchy in the UK but the Angelic Upstarts were writing about events and issues that were happening in my hometown. I loved Punk because of the Pistols, Damned, Clash et al but I understood Punk because of the Upstarts’. 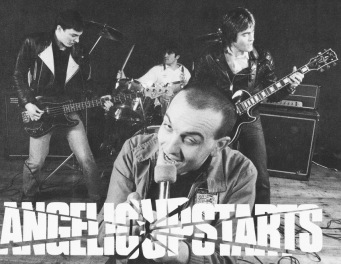 ‘One other major influence at that time was my dad. He heard me learning and practicing some punk songs on my first ever guitar which I still have. He gave me one of his Eddie Cochran records and said ‘Here, learn that’. So I did and said to him ‘Here dad, that record’s just like the Pistols’ my dad’s reply was ‘check the date it was recorded you stupid bastard’. 1950’s?? Fuck me, that seemed prehistoric to me at the time and there was me thinking music only started with Glam then Punk…Wrong!. I scored for all my dad’s old vinyl though, Chuck Berry, Eddie C, Buddy Holly etc…Mint!’

How did you get involved in playing music ? ‘The Boy’s Brigade. I started as a bugler but always wanted to be a drummer, so when I got the chance I took a drum and started rehearsing with it at home. Well, when I say at home I mean my dad’s shed. My mam hate’s noise, always has and even to this day she has her telly’s volume on something like minus 24! So I’d get hoyed out into the shed.
It was cosy as fuck. I can still smell the creosote, Jeyes fluid from Lindgrens, old tins of gubbins and my sneaky tabs (loosies, remember them?) Our neighbours must’ve been either stone deaf, extremely tolerant or best mates with Ted Moult and got a great deal on double glazing, because the noises coming out of that shed must’ve been bloody torturous!’

Where did you rehearse and when did you start playing gigs? ‘I played my first gig before I had ever rehearsed! I was still at school maybe 14 or 15 year old and I was approached by a 6th former. He said he’d heard I’d played guitar and would I help his band out by playing bass, as they had a gig coming up. I agreed and asked him when the gig was, thinking it might be in a few months time and the lad said “Oh it’s tonight”! Ehhhhhhhhh???? Don’t worry, he said, do you know the bass line for Satisfaction by the Stones? Aye? Right, well just play that for every song. A few hours later I was upstairs in the Marsden Inn drinking pints of lager and belting out Satisfaction like there was no tomorra’.

What venues did you play ? ‘In the early days I played a few pubs in South Shields, upstairs in The Cyprus, The Commando but because I supported Newcastle United, I would spend more time in Newcastle than down Shields. I discovered great bars like The Farmers, Jewish Mother, Egypt Cottage, Barley Mow and the best bar ever for live music in Newcastle…The Broken Doll. Mega City Four gigs upstairs in The Doll, smashed off your tits on Slalom D, those were magic times Gary, magic times’.

What were your experiences of recording ? ‘Mostly positive and I’m not talking about the actual written material, because that usually takes care of itself either by being written and well rehearsed before you go in, or jammed out spontaneously to give it an extra edginess on the day. Like most things, the greatest experiences are when you learn the most and I fell double lucky by having Steve Mack as producer for a band I was in at the time called The Sunflowers’.

‘Steve’s from Seattle but in the early 90’s he had a studio called ‘Bang Bang’ in Hackney. Steve was also the front-man for That Petrol Emotion who were formed by John and Damian O’Neill and were signed to Virgin. Steve was a brilliant producer and he showed me how to properly arrange songs to get maximum impact, he explained about dynamics, he was a fucking genius and my biggest song writing mentor’.

Have you any stories from playing gigs ? ‘Haha, oh aye shitloads but a lot of them I can’t repeat. Ok then here’s a couple’.

‘ The first involves a band I was in called Speedster and we were asked to play an all-day music festival at Newbiggin Bank House Social Club. How they even got onto us in the first place is still a mystery but contact us they did and asked if we would play. As soon as the bloke said ‘Social Club’ I immediately asked him if he knew that we were a punk band, that we played all original material and no, we wouldn’t ‘play something wa knaa’!! He replied that he was happy with that and that he wanted, as he put it to ‘put summat on for everyone son, a bit of variety’. Well, you can’t say fairer than that I suppose so we agreed to play even though, to be truthful, we still had reservations.
Anyway, the day of the festival arrives and we travel up in our drummer’s van.

We arrive and get shown through to the dressing room by the Concert Chairman, who introduced us to some bloke and his barely teenage son. ‘See this lad here’ ? says the CC pointing to the young lad, ‘he can play The Shadows on his guitar, give him a listen and tell iz what you think’ ! Now I don’t know if the CC had mistook us for Tony Hatch or Mickie Most but we stood in uncomfortable silence as this young kid gave us back to back versions of ‘Apache’ and ‘FBI’. No disrespect to the young kid but it was cringingly embarrassing to see his dad and the CC with a proper chuff on about this young lad, who probably felt as uncomfortable playing for us, as we felt watching him. A pushy parent is one thing but a pushy parent and a concert chairman, the poor kid must’ve been going through hell.

Whilst all this had been going on an old bloke had been popping in and out of the dressing room. We assumed that he was club staff, or one of the dreaded ‘committee men’, so we didn’t really pay him that much attention….more on him later! We asked if we could see where we were playing and were escorted outside and onto a concrete flagged patio, with two small speakers for the vocals…and that was it.

I remember it was a sunny, warm day so we buggered off into Newbiggin and got ourselves a slab or two of lager, it was Oranjeboom lager and how the fuck I can remember that I’ll never know but there you are. We went back to the club and just sat in the sun drinking our cans and waiting for our patio erm stage time. In fairness we had a great view of the seafront and it was a beautiful day but we began to dread what would happen when we got up, as the audience was comprised mostly of old people and staunch clubmen types (sorry for the generalisation) nonetheless, as more of the Oranjeboom began to go down, the less we gave a fuck….except our drummer, who wasn’t drinking because he had the van and was dreading it more and more the nearer it got to our stagetime.

Finally we got up to play our set which was approx 50mins long. Not today though, our drummer just wanted to get on and off as quick as he could and set a band personal best time of just over 30 mins, by playing the set at 200mph! There was problems with the weedy little PA as our backline just roared over it. When we finished, you would’ve thought the audience had been twatted with a wet Turbot, they just sat there, stunned and bemused.

We got off and went back to the dressing room and were met by the bloke who had booked us, he paid and thanked us and seemed happy enough so we thought fair enough, a little surreal but fair do’s. Then we noticed the little old fella from earlier, except now he wasn’t wearing old gadgie gear, he was squeezed into an Elvis Presley, Vegas bloated years jumpsuit. I did spot a custom addition though, the proper Elvis caper has something like American Eagles sewn on it and encrusted with jewels, this fella had Magpies sewn on instead of Eagles and glitter that he’d glued on. We thought he was fucking mint and couldn’t wait to see him get up and strut his stuff, so we went up and parked our arses where we could get a good view.

Hey man, when he came on everyone gave him a big cheer and he was over the bit glad with himself. He started belting out Elvis songs and you know the crack, it’s just owld fella chanting and wobbly vibrato innit.
Then he fired up with a real classic (You’re the) Devil in Disguise. A track I quite like as it happens but this fella sang his own version, I suppose the Magpies on his shirt should’ve been a big enough clue but the owld fella was clearly a proud North-East working class fella and when he got to the chorus he roared out ‘You’re Mike Neville in Disguise’ ! It probably doesn’t sound all that funny a story in and of itself but the experience of it was fucking hilarious’.

‘Second story, I can’t give names for this one but it involved some after show shenanigans at a hotel in Blackpool. One of whose guests included a certain diminutive Scottish lady, who likes dressing up as a schoolboy. The surreal level went off the scale with that one, especially when the after show shenanigans moved from the bar and upstairs to a hotel room. True story’.

What are you doing now and what are your plans for the future ? ‘I’ve just left the Angelic Upstarts after being with them for the last 11 years and having written and released two albums. I’ve got my University finals coming up for an MSc so I need to focus 100% on them for the next few months but after that I’ll be heading straight back into music again, although probably not with the Upstarts. I’ve got plans for what I’m going to do music wise and should be able to reveal those towards the end of the year’.