Who was Wavis ? An exclusive interview with the reclusive character and his biographer Gary Craig: ‘As a kid I’d been to Wavis O’Shave gigs at the Bolingbroke Hall and St Aidens Church Hall in South Shields. He used to have some strange sort of admission fees, like slices of bread or boiled eggs. It had to be a hard boiled egg cos he wouldn’t let you in with a soft boiled egg. If the entry fee was a white slice of bread but if you brought a brown one you were caught with a forgery’.

‘When he was making the album Anna Fords Bum we decided to go down to ITN in London and try and meet up with the TV newsreader Anna Ford. Amazingly enough we had only stood around for an hour when Anna Ford herself just walked straight out onto the steps of ITN.

She was approached by a man with an 18 inch polystyrene nose attached to his face. She stood there, waited while he got down on one knee and proposed marriage, we took a couple of photographs and it made the national newspapers. After that I think he managed to get a bit more famous, he used to get on The Tube and establish one or two characters’.

Wavis: Wavis had many adventures. I remember driving through London in the Wavis mobile. Someone sprayed a massive nose along the length of the car. You could see we were out of the area because of the licence plate on the car.
Gary Craig: We got ourselves a bit lost and headed down a deadend. We realised there was a car following us, I thought it was just going to come past so I was waving them on.
Wavis: All of a sudden it was screeching of tyres. Turned out to be the Flying Squad. It was just like Reagan and Carter on the telly. When I used to leave the area I used to have masks and stuff like that in the boot, this time I also had a baseball bat wrapped in Christmas wrapping paper. They asked me to get out and started to search under the seats and opened up the boot.
Gary Craig: They started to look at all the things in there and said sticks and masks son you could get 15 years for this. But Wavis and another lad who were in the backseat donned the 18 inch polystyrene conks, stuck there heads outside the back window and said ‘can you tell me what’s wrong officer’.

At this stage I think he decided we were pretty much crazy and there was no point of trying to pursue enquiries. 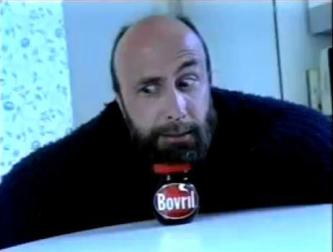 The Tube in the early 1980’s was a music programme broadcast live from a studio in Newcastle. I was lucky enough to be in the audience for a few show’s. The early series featured Wavis O’Shave but it was in the Summer of 1982 when we witnessed the birth of one of Wavis’ best known creation’s, The Hard.
‘I’d filmed two 45 minute VHS movies, The Hard and Enter the Hard, where with a bit of camera trickery The Hard challenged and fought Bruce Lee. These films were quickly made available to Wavis fans on the Whiteleas Council Estate. Video copies fired around the estate and a Hard mania was born’. 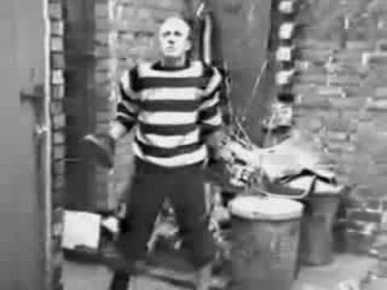 ‘I was asked by Tyne Tees TV who were making a music programme for Channel 4, if I would like to contribute as I had been on their Check it Out show as Hootsi Tabernacle. Hootsi was a spoof about an American Cult leader of Nebbism who had bought Marsden Rock and was having it transported bit by bit over to the States by helicopter’. 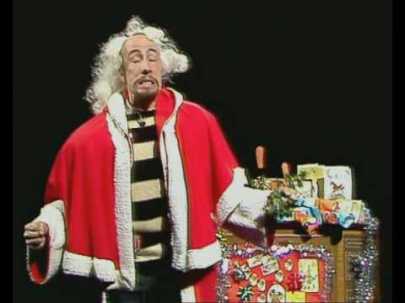 ‘Researcher Nigel Sheldrake loved The Hard videos and wanted him on the show. Somewhat lazily I was hoping they could simply use the footage from my own VHS movies but of course the quality would be far better if we re-shot some with professional cameras so I conceded to redoing some in my own humble back yard in Stoddart Street, South Shields’. 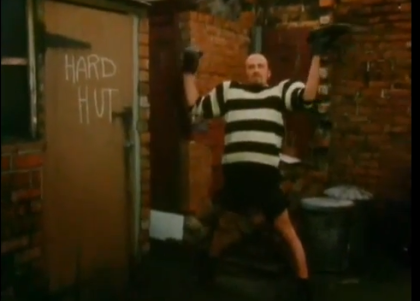 ‘The brand new TV station Channel 4 and The Tube was planned to air in November 1982 so we did the shoot sometime in September. I was designated a sizeable film crew including the cameraman who couldn’t stop laughing, nobody knew what I was going to say or do next, so it took a few takes until he and his wobbling camera settled down.

Director Geoff Wonfor took an unashamed back seat, left me to it really, and told all the crew to do whatever I asked them to. And they did. It took about three hours and obviously not all of the sketches made it to the screen’.

‘The origin of the famous stripy jumper worn by the Hard was that I spotted it hanging up at a friend’s house. He was much taller than me so in order to make it fit I was inspired to have to pad myself out quite a bit, hence the exaggerated muscles. I guess it may have reminded me a bit of Dennis the Menace’s jumper. The Dennis the Menace Fan Club is the only thing I have ever joined in my life. When The Tube first aired The Hard’s national debut was on the second or third episode’.

‘On another occasion, I was given the luxury and rarity of a full day to film on location in Newcastle. As the day wore on the crew got progressively drunk on the free beer, the disastrous result being that much of the footage was unusable, and so Lord Lobsang Coalseamwig, The Hard’s toff cousin, with top hat, tails, monocle and Doc Martens with his posh phrase ’I felt no thing’ never made it onto the Mid Summer Tube Special. This was despite it been advertised the previous week. That was naughty of them because it was probably the best thing I had ever done.

Part of the jollity that day was when word got back to Director Geoff Wonfor that I said I was going to throw my self off the Tyne Bridge instead of the prepared Hard dummy but not to tell him. When he found out he pinned me up to a wall and said if I did he’d kill me! I’d have thought the drop would have done that’.

‘The immortal catch phrase ‘Felt Nowt’ came naturally, although we suspect the Hard actually did feel the lot. Two weeks after he made his debut on the show The Tube crew were sent to film something in a Manchester nightclub and all the bouncers were wearing homemade ‘Felt Nowt’ T-Shirts! The Hard was here to stay.

But these days, The Hard resides at a secret location, frozen solid in a state of cryogenic suspended animation in order to avail himself for historical study by future generations, as the worlds hardest person ever. Premature defrostment is only an option should he be called upon to save the world if ever under threat from an incoming asteroid, whereby NASA have booked him to head butt it away’.

‘I, Mr Wavis O’Shave true to my origin, remain an enigma even to myself, projecting multiple aspects and facets of my being hither and thither under numerous names and identities, some of which are known only to a few. One of me being a successful author, broadcaster and occasional film maker of all things deeply profound….’

It is rumoured that  video’s of The Hard are still in secret circulation on the Whiteleas Council Estate watched by a small number of Hardites and Hardettes wearing black and white striped jumpers underneath their anoraks. We can’t deny that Wavis happened, and is still happening.