Formed in 1979 New Wave of British Heavy Metal band Dealer are from Cirencester, in the South of England. Vocalist and rhythm guitarist Trevor Short got in touch…

‘We had quite an entourage back then, to accomodate everyone and our gear we got a massive 28 seater ex US Airforce bus, and our first proper gig was at a pub in our home town, we ran it all from one plug socket – lights, PA and the back line haha!’… but where did it all begin ? ‘I was in the church choir as a kid and when I was 15, a local band were looking for a singer and asked if I was interested. We all had similar influences, basicallly anything metal from the late 70’s and 80’s like AC/DC, Budgie, Diamond Head and Scorpions’.

‘Originally we were called Lone Wolf but had to change the name as Paul Di’Annio, who was sacked from Iron Maiden, formed a new band called Lone Wolf. We looked into fighting to keep the name but eventually gave up and that’s where Dealer started’.

When did you start playing gigs and what venues did you play ? ‘We played all pubs and clubs up and down the country with memorable gigs in Swindon, then over to Oxford and into Cardiff. Then a couple of gigs where we supported Gary Moore and the mighty Motorhead at Chippenham Golddiggers. The whole experience will stay with me forever. Motorhead and their crew could not have been more helpful. We spent most of the evening in their dressing room having been practically dragged in by Lemmy ‘Help yourself to beer and food guys’. When it was time for us to go on, Lemmy and Philthy stood in the wings and watched our whole set. It was a sell out gig and everyone was up for it. We actually got an encore but we didn’t think we would be allowed to do one more and started to leave the stage. Lemmy was having none of it and insisted we go back out for our encore. He was a very kind and generous man. The crew worked their asses of for us too. Nothing was too much trouble’.

‘All in stark contrast to the Gary Moore gig. The man himself was quite friendly, he seemed almost shy but their management not quite so. We had to wait outside while the band sound checked. Then we were bundled on and off and pretty much made aware of our place. Good gig though’.

What were your experiences of recording ?  ‘Tudor Studios in Swindon was our first time in a proper studio that was around 1980. I remember we recorded 3 songs but amazingly with all the archive material we collected there is no recording of this session, not a tape or receipt so I cannot even tell you how much it cost !
We have one track Strip Jack Naked which has survived from the 2nd session we recorded at a studio in Reading. Again we haven’t got much info on the name of that studio but I can remember we were struggling to find a place with a producer who understood heavy metal’.

‘I’n 1982 we wanted to record an album’s worth of songs, but this would of cost a fortune so we converted our rehearsal space into a studio. We got all the necessary gear, a recording desk, quarter inch reel to reel and plenty of mics. Then went for it, totally live! The end product we called Boogie, Booze & Birds and put it out on cassette’.

‘Not long after, we met a guy who owned a studio in Cardiff, we found that he really knew his stuff. He was a real saviour for our recorded output so for the next few years, Studio 2 was our real go to place. The result was our deal with Ebony Records’. 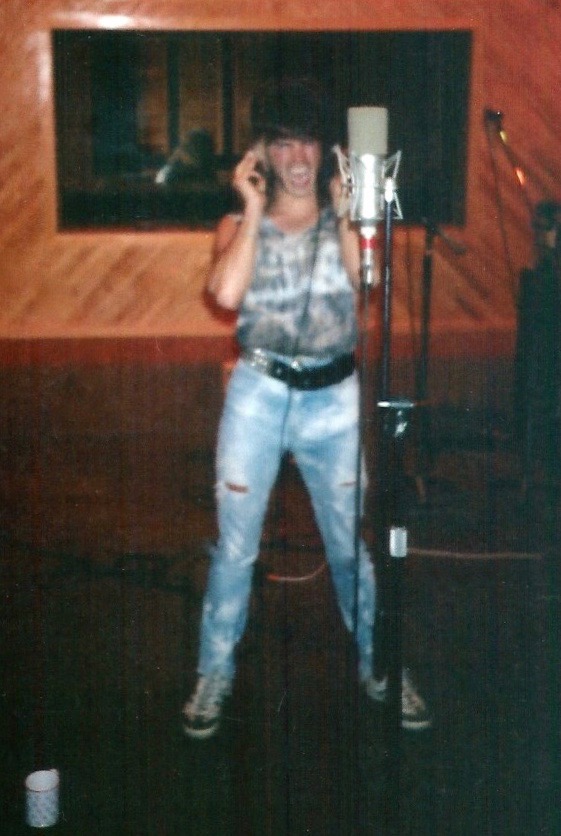 ‘Our next recording was at Ebony Studio in Hull. It was a pretty hectic time because we only had one week to record and mix. But we knuckled down and came out with the First Strike album, that was released in 1986 on the Ebony label’. 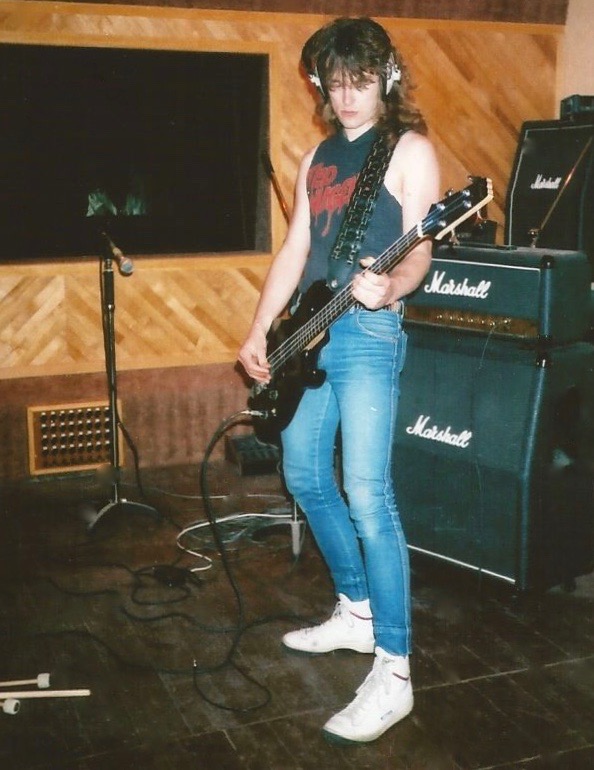 Have you any funny stories from playing gigs ?  ‘I mentioned that we got a massive ex US Airforce bus, well that was a V12 Chevy that was very slow and very thirsty! We added our name on the destination board at the front of the bus, we thought this was great but proved not to be one of our better ideas as the police would stop us on a regular basis. We had just done a gig in Guildford when we were stopped and hauled back to the police station. We were strip searched and held for over 5 hours…finally we were let go’. 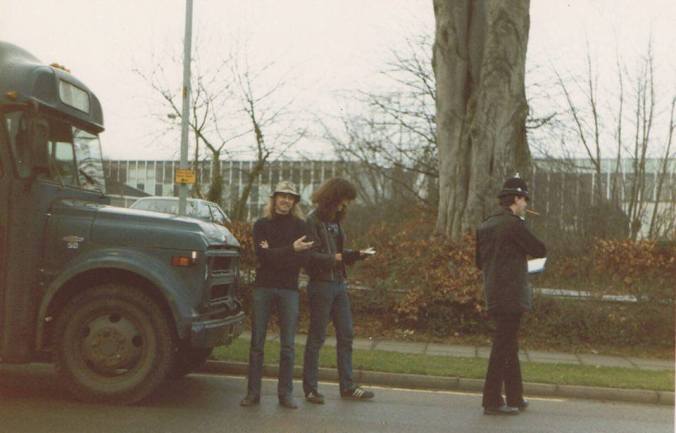 ‘The bus wasn’t the most reliable as it would reguarly break down and to get going again we’d have to push it. I remember supporting Spider in Newbury, we were late after breaking down again. We pushed the bus into the venue’s car park and all the people in the queue were watching us. It was like a scene out of the TV spoof documentary Bad News’. 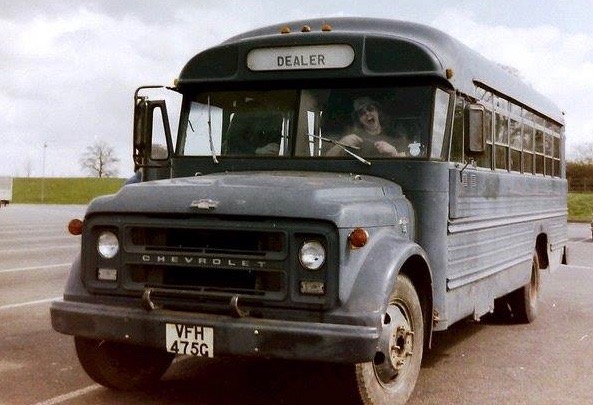 Have Dealer been active lately and is there any future plans for band?  ‘In January 2010 we played a ‘one last gig for old times sake’ gig in our hometown of Cirencester. To our surprise that gig was quite a success and I have to say it kinda stirred up the juices again. Also ONR, a Greek record label, released an album of our demo’s which was later released by German label High Roller Records’.

‘By 2011 of all places to gig, we were asked to tour Russia ! A 10 day tour was set up and that was an absolute blast. Our album First Strike was also remastered and released there. More festivals followed including the Heavy Metal Maniacs in Holland’. 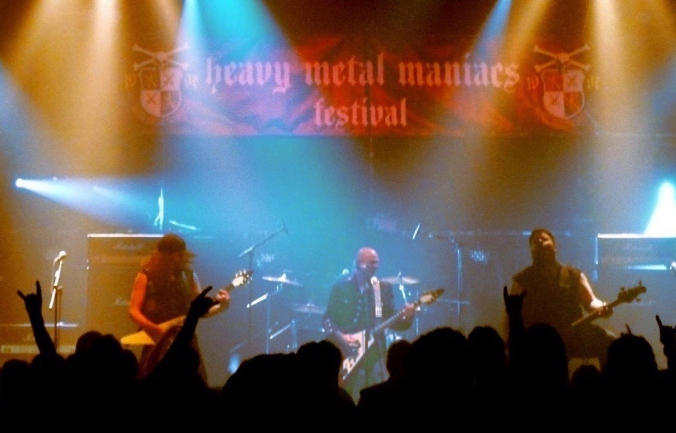 ‘Then Dealer was put on hold after the tragic death of original bassist Pete Gentil. This was absolutely devastating. After a year of contemplation Dealer returned with new bass player Tom Bull to play gigs in the UK, we went back to Holland again and also got on the Lechlade Festival bill supporting Status Quo’.

‘Things were starting to look up again when Steve our lead guitarist developed a problem with his hand meaning Ash Doulton, was brought in to fill on guitar duties. This year with gigs ready for Europe, USA and India we are ready to keep the Dealer train rolling’. 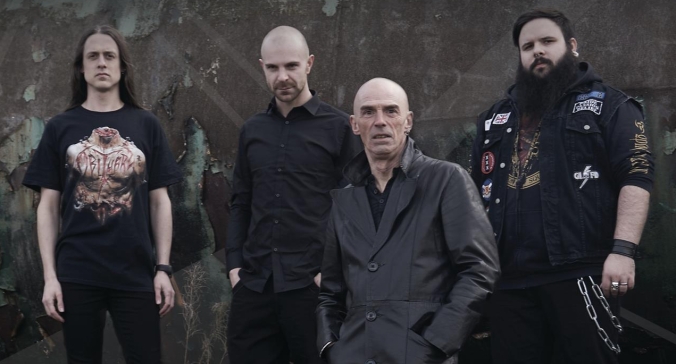