‘We played South Central LA and the gig got swamped by two rival gangs. The street outside had gangbangers in cars screeching up and down the street. The gangs were ready to go to war. Everyone was crapping themselves. We finished the set then legged it’….

Where did it all start ?

The present line up is my brother Chris Wright, Spencer Brown and Carlos. I’m the only original member from the start. At the very beginning we wanted to sound like a mash up of Rock and Punk. We listened to bands like Stiff Little Fingers, UK Subs, Nirvana, Cock Sparrer and AC/DC’.

How did you get involved in playing music ?

‘The only reason I picked up the guitar was boredom. I was 14 years old and got it as a present for Christmas. I started to watch early Guns ’n’ Roses videos and got obsessed with music. I wanted to learn how Slash played his guitar solos, it amazed me.

When I realised I couldn’t play like that, I turned to punk music, mainly Stiff Little Fingers and UK Subs. I spent months learning in my room. I found I could pick their songs up easier.

Many years later we would tour and become friends with these types of bands, who would have known.’

‘We started off playing our school hall in front of the kids and teachers. They didn’t think much of us punk kids making a noise, but we left our mark for sure. Twenty odd years later I bumped into an old school teacher and he mentioned that gig haha.

After that we started playing pubs up and down the country, it was difficult ‘cos of our age. But we managed to pull it off somehow. Around that time we supported the likes of UK Subs, The Exploited, Peter and the Test Tube Babies, GBH and a few others.

I wrote hand written letters to gig promoters back then, it was hard work but it was great. We even managed to get to Belgium for a few gigs’.

‘In 1995 we recorded our first self financed single in a studio called Uncle Sams here in Newcastle. It was a professional analogue set up. I can’t remember costs but it wasn’t cheap.

That first single was called Memories of Saturday and on the b side was Fight Back. Both those tracks are on a compilation album put out by Hammer Records called True Brit.

After releasing the single we followed it up with an album This is Our Music. Uncle Sam’s studio had a good vibe !’

Have you any funny stories from gigs ?

‘There are always funny stories when traveling abroad with the band, trouble is it’s always a blur because of the alcohol ! I remember on one of our first trips abroad we decided to go by ferry. We got absolutely plastered on the way over and one of the lads passed out drunk on the floor. Someone decided to pour a carton full of boiled rice down the back of his underpants while he slept. It wasn’t hot by the way.

Anyway, morning came and we forgot about the various antics that had went on the previous night. As we left our cabin we joined the queue of people near the exit waiting to leave the ferry, when suddenly our mate started screaming and grabbing at his arse.

He was dancing round as if he was on fire, pulling rice out of his pants, he thought he had maggots coming out of his arse. With the added hangover he was really panicking, you should have seen the look on his face. I can still remember it now’. 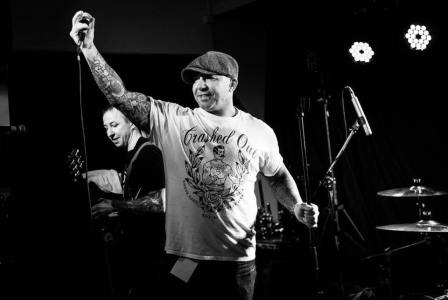 ’Once we played in an old prison in Germany, with support from The Bruisers, who went on to become The Dropkick Murphys. Anyway it kicked off outside and some nutters were shooting guns so we had to hide in the back of the building.

This is a very bizarre but true story. We were in LA when we met Lemmy at the Rainbow Rooms. He asked me if I wanted to buy a Hollywood star paving slab with my name ettched on it. He said he could have it shipped to Jarrow for me!! Honestly true story’.

‘Former Angelic Upstarts drummer Decca Wade (pic above) was playing for us in 2006. He played a gig in Spain completely naked and when he finished he stood up from his kit and bowed to the crowd. He took a step back and disappeared off the stage. Thing was the stage was in the centre of a hall and a curtain was drawn behind it so he couldn’t see the 5ft drop. He had to run from behind the stage through the crowd to the dressing room, all this while he was naked’. 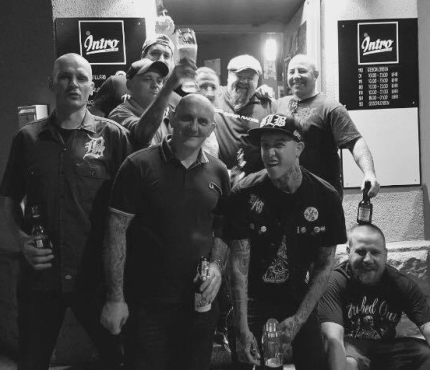 What are Crashed Out doing now, and have you got any plans for the future?

‘Well twenty plus years later we are still playing all over the world. We have new recordings in the pipeline and we have some new band members too. Things are going really well. Thanks for the interview’. 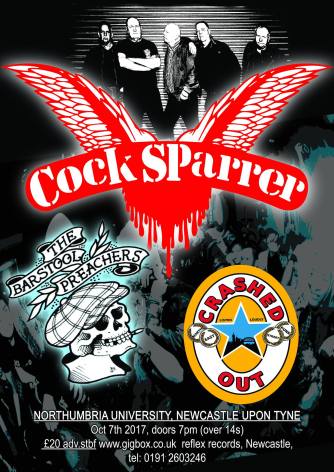 Crashed Out have lined up a few stand out gigs this year. They are playing at a charity gig at the Head of Steam in Newcastle on August 25th.

In October the band are at Newcastle Uni with Cock Sparrer on the 7th, then on the 20th they are supporting Sham 69 at Newcastle Academy.

December 9th they travel to Wales for a pre-Xmas bash then on 28th they are having a Xmas Mash Up at Trillians Bar in Newcastle.