Stevie James has been in a few punk bands over the years so he’s collected a lot of memories… ‘I’ve being tapped up by a midget in New Orleans, locked in squats in Genoa and our singer got stuck in a parachute once. I got altitude sickness on stage in Columbia and hid from Nazi skinheads in a loft in Poland. So many memories but if you venture out of your door you experience life in all it’s glory’.

Where did it all start ? ‘I started off playing in bands as a kid, playing punk rock on drums. My first band was called The Betrayed and since then have played in so many bands including Hellkrusher, Grudge, Blunt Wound Trauma, Demon 340, The Fiend and The Varukers’.

Who were your influences ? ‘Like most kids growing up you start with the music your parents listened to. For me it was a family of two sides. My mothers music taste was diabolical but my dads was great. He listened to bands like Them, The Kinks and the Rolling Stones. But he was also into heavier stuff like Black Sabbath, Iron Maiden, AC/DC and Motorhead. It’s all music I still listen to.

My own music started with Damned, Specials and The Sex Pistols. I remember me dad playing Friggin in the Riggin to me uncle and thinking, I’m gonna get me lug dadded here but he just laughed. Then I discovered Angelic Upstarts and the UK Subs. Now I had a thread to follow I quickly discovered punk in all its forms and along with school mates, found the harder edged and politically motivated punk of the early eighties. Once I discovered that, it was life changing, I never looked back’. 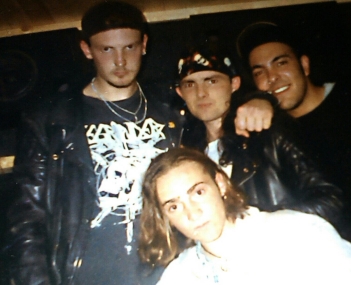 How did you get involved in playing music ? ‘When we were kids we hung around in large groups on the streets, roaming all over the place. In the early eighties there was an old drum shop on Bede Burn Road in Jarrow that would chuck old sticks and drum heads in a skip around the back. We would go and raid it and see what we could acquire. Kids from my generation didn’t have access to much so even an old drum head would spark off the imagination.

We would play Crass records that one of our friends older brother had. The anger and politically charged lyrics was the first time I really related to someone else’s point of view. It was the beginning of my interest in music.

Around ’81 or ’82 we went to see The Phantoms of the Underground, Blood Robots and The Pigs in a church hall in Jesmond, and that was that. I remember having to lie to my dad about where I was going and when I got dropped off at home after the gig, I thought I was gonna get a clout around the ear, but he just said ‘get to bed lad’ and I escaped another hiding.

We decided after that to start a band and moved in to me dads garden shed for about three years. I built a drum kit from water barrels from me dads allotment. They were covered in towels perched on upside down chairs with the backs pulled off and the dowel from the backs for sticks. I had a snare drum shell with only a bottom head and no snare, so I turned it upside down and covered it with a towel. That was my first kit until I bought a proper kit from a lad at the paper shop for £30.

We did our first gig in my parents kitchen when they went shopping. We sold tickets for 25p and filled the house with kids from the estate. We borrowed the school drum kit and took it to mine in shopping trolleys. Me parents came home half way through the gig and caught us. Me old man said I had one hour and went in the living room and closed the door. He was alright about me music was me old man’.

When did you start playing gigs and what venues did you play ? ‘When I got heavily involved in the punk scene it was very d.i.y and we would play gigs anywhere and everywhere. The bands we followed predominantly played at The Station in Gateshead, The Bunker in Sunderland and later The Broken Doll in Newcastle.

I played my first gig at the Anglo Asian club in the west end of Newcastle but we shook the floor so much they stopped us playing there. ‘We also used to play a lot at The Irish Centre in Newcastle’.

‘When I was in a band that you could call serious we did our first gig at The Riverside in Newcastle but we played all over the country and some of us into Europe and America. I have played worldwide over the years, the punk scene is as far reaching as it gets and I’ve played with everyone from Glen Matlock from the Sex Pistols, to UK Subs, Discharge, Exploited, GBH, The Damned, Steve Ignorant from Crass, The Dickies, The Misfits, you name it. Those early days of kicking around the doors were special though’.

What were your experiences of recording ?  ‘We were about as clueless as it gets but what we lacked in knowledge we made up for in enthusiasm. I can’t remember prices but we recorded as cheaply and as quickly as possible in those days.

We used to go to Rednose Studio on the north side and recorded our first single with a band called Senile Decay, which was mastered at Abbey Road then our first album there with Hellkrusher on the Wasteland record which was released in 1990. The record company said it wasn’t good enough so we went to Baker Street Studio in Jarrow owned by local musician Howard Baker’.

‘I turned up with a pair of old drum sticks covered in gaffer tape and when the engineer asked me where my drums were, I told him I didn’t have any. I thought this was a studio so there would be some here. We ended up borrowing the kit of someone who stored it in the studio.

I later went on to study and become a sound engineer and record many artists over the years and in studios all over the world, including the amazing Rooftop Studio in South Shields. I went on to design and build The Cave Studio that is still standing to this day, which I’m proud of as it’s in my home town. I’ve always produced everything I ever did since I had the knowledge to do it’. 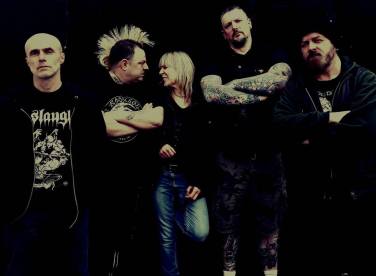 Have you any funny stories from playing gigs ? ‘Oh aye. So many, I wouldn’t know where to start. Most bands spend just about the full day travelling and drinking so they do everything three sheets to the wind but I don’t drink so I remember everything.

I’ve got loads of memories, like the time I slept in a convent, we’ve been escorted by police out of various cities and even over the borders of countries. There has been riots, kick off’s, we’ve blown so many circuit boards in venues it’s not funny.

I remember doing a gig with The Fiend and the guitarist Robby pulled into a petrol station to fill up the van and somehow managed to jam his keys into the van ignition and pulled off the steering wheel trying to get them back out. We had to leave the van on the forecourt and Robby got a lift on a moped to go get his car. Aye we still did the gig haha!’

‘We done a gig in The Ferry pub in South Shields where we were so loud we vibrated all the bottles off the bar. They could hear us down the road at another pub so they complained to the police. One time we went through the metal detector in Berlin airport and one band member accidentally had a butter knife in his boot, it didn’t go off but we were sweating buckets going through security.

We were on tour in America when one of us got pulled in Dallas for having the same name as a wanted terrorist! They showed us a picture of an Asian fella and asked if it was one of us before they would let us go into South America’.

What are you doing now and are you still involved with music ? ‘Music got under my skin and never left me. I was involved in an accident that damaged my spine badly and it had an impact on my health in general. It was a long and arduous climb back up to a semblance of normality but it changed how I live my life and affected me profoundly. I can’t play anywhere as well as I used to as the damage is degenerative and I have to tread really carefully but I still play’.

‘I just can’t imagine my life without playing music in it. I will always play d.i.y punk just how its always been, and how it feel’s natural to me. There isn’t a single penny in it and it’s a chore like you couldn’t imagine. It can be frustrating to manage the logistics of it but I love it with everything that I am and always will, Cheers’.