10 years ago I started researching the South Tyneside music scene and from there a number of interviews with musicians were set up. Here is a few stories taken from them.

Duncan Binnie: ‘I was seeing bands when I was ten year old and at that time to go and watch bands at the Newcastle City Hall you’re just blown away. My brother had a guitar that I pinched out of his room, tried playing it, just the one string, thinking I can play this. Eventually it leads to a band, four lads getting together which we did’.

Ted Hunter: ‘My first inspiration to play music was me Dad, he was a guitarist in the ’60’s. Then when I was 14 I got a ticket to see Ted Nugent, he was jumping around the stage, screeching his head off.

We had a little covers band and we used to practice in St Peters Youth Club in Whiteleas. There used to be a youth club in South Shields called St Hildas and local bands used to play there’.

John Hopper: ‘I just bought a cheap bass rehearsed and plugged away at St Judes Church Hall in Laygate. We played The Cyprus, the pubs in Shields. We just liked gigging that much we realised we had to do it more and more’.

John Lockney: ‘I was forever bashing away on me legs to music and many people said why don’t you become a drummer. We used to rehearse in the back of Tyne Dock Youth Club and we started playing gigs, I remember Bolingbroke Hall and Boldon Lane Community Centre in Shields’.

Joe Peterson: ‘Around the age of 14 my Dad was a singer in the North East Social clubs so that’s where I started thinking about music, started playing guitar. We played all round the country at that time as the clubs were thriving’. 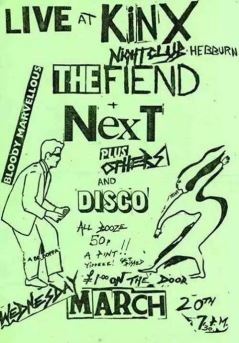 Robby Robertson: ‘First band I saw was The Damned, my lad took me along and that was it, hooked from then. Everybody had a go at being in a punk band. Everybody could have a shot at it and they did. We started off in Hebburn, Kinx nightclub, it was a cellar. We thought we were the business, we were rubbish like.

We done the first gig, we jumped around all over, pulled the leads out and the p.a. caught on fire. The singer run over and blew it out. We had to finish after three songs, it was an absolute disaster, thinking this is a bit harder than we thought it would be. We went on to play The Station in Gateshead with loads of bands, decent bands like Conflict and Icons of Filth‘. 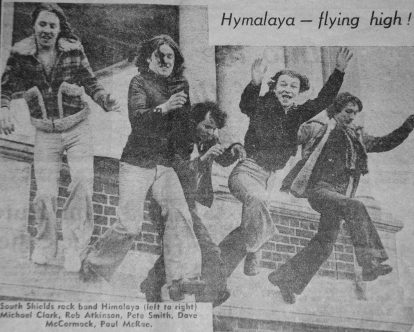 Paul McRae: ‘I got into music when I was about 10, in the backyard of John Williamson Street, playing with knitting needles and a dish. We used to rehearse at Trinity House Youth Club and we were right into Free then, so we started rehearsing all Free tracks. Then we played the schools, Stanhope Road, Dean Road. We used to play The Hunter and we liked it that much we played it ten times in the same gig’.

Rob Atkinson: ‘Lou Reed, The Doors, Iggy Pop that’s where I was at the time. In the band Next it was the influence we had on each other. It was a bit off the wall, could be a bit weird. But there wasn’t much else like it. When you work with people who can be so productive and come up with ideas, when you bounce of each other that’s the best part of the music.

Billy Morgan: ‘The alternative punk scene started and that changed things for me. Instead of being someone who was an observer in music I thought that I can do it. It was like we wanted to jump up and down and be heard, I’m here, I exist. Definitely pushing things to the alternative and coming up with something different.

Richard Jago: ‘The punk thing was pretty fundamental, it was totally different. XTC, Ian Dury and the Blockheads that was the stuff that really made me sit up and listen. I couldn’t play guitar at least I couldn’t play very well, I couldn’t play drums so I started throwing words together. A number of influences like John Cooper Clarke, Ian Dury, the humour that was in what they were doing.

I was also very much influenced by the ’80’s, middle of the Thatcher regime, pits were closing, industry was shutting down the yards were going’.

Some bands scraped the money together to go into studio’s and record demo tapes and singles. If the band were lucky enough small record labels would make albums.

Joe Peterson: ‘Lots of bands at the time used to record demos and post them off to every record company they could think of. I think they were very rarely listened to’. 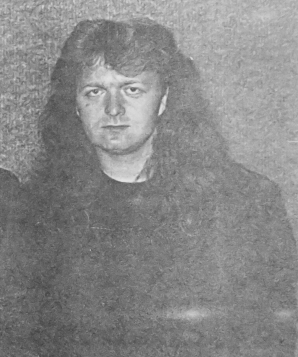 Ted Hunter: ‘There was plenty of bands doing original music at the time that could of got further, and obviously the record deal is the holy grail. But many bands got plenty ‘we regret to inform you’ letters.

We spent four days in Guardian Studios in Pity Me, Durham and spent £400. Which was a fortune in those days. I was only getting £25 a week. We come out with two really good Prog tracks. Which I don’t think got the band anywhere’.

Duncan Binnie: ‘Desert Sounds was the first studio where we done a demo. But I was such a perfectionist. I wouldn’t send a demo tape away to a record company because I didn’t think it sounded quite right, I wouldn’t send a photo away to a record company cos I would think I didn’t look right. I just didn’t want the letter back saying, we don’t want this’. 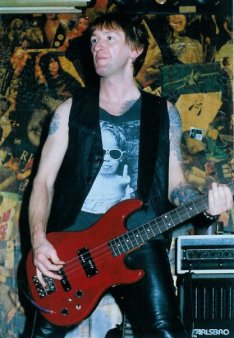 John Hopper: ‘First major gig was Tiffany’s in Newcastle, that was a showcase. That’s where we got the record deal with NEAT Records in Wallsend. When we went into the studio we done most of the tracks that was listed for the album and the demo ones got taken off the reel and put onto the album reel. Originally the album was just called Slutt and then it got catalogued as Model Youth. It was released in 1988′. 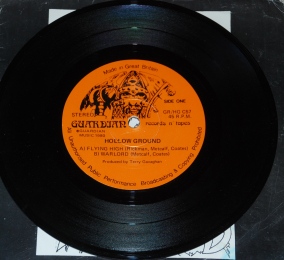 John Lockney: ‘The studios we used was Guardian Studios in Pity Me just outside Durham, run by a man called Terry Gavaghan. We recorded the four track EP and that was so nerve wracking at the time because we were green as grass.

We were proud of the songs and we went around the local record shops to leave some copies on sale or return. It really was great, I mean you’ve been brought up on singles. Now suddenly you’ve got one of your own. It’s still one of the proudest things I’ve ever done you know.

We went back to record another two tracks for a compilation album Roksnax, the production was better then, we weren’t as green and went back again and done another four tracks for demos to flog around record companies. You can tell the difference how confident we were with more experience in the studio’.

Being in a band can also bring it’s funnier moments… 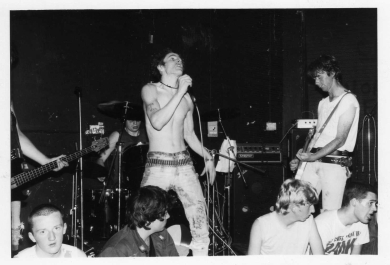 Robbie Robertson: ‘Kev the original singer out of The Fiend decided he was going to get a mohican, so we cut this mohican for him but it turned out a bit wonky and looked rubbish so we painted it with yellow gloss paint’.

Joe Peterson: ‘We spent a lot of time in Scotland. Used to drive to a club, put the gear in the club, do the performance, leave the gear in the club overnight and sleep in the van. Which was really hot in the summer and absolutely freezing cold in the winter. So cold I remember waking up one morning, someone was sleeping in the passenger seat and his forehead had frozen to the window. We had to peel him off in the morning when he woke up’. 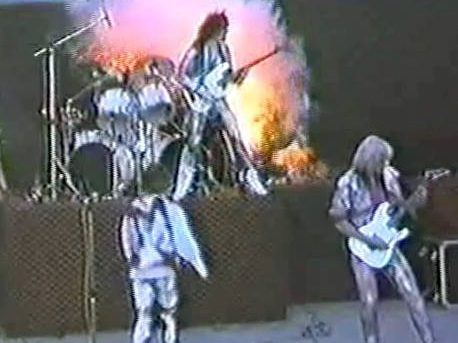 Duncan Binnie: ‘In ’87 we’re playing the Amphitheatre down South Shields in front of can I say, one of the biggest crowds that’s been down there. Council wouldn’t give us any lights so it was an absolute disaster ‘cos halfway through the gig it was dark. But we had the fireworks and the stage was pretty good at that point.

We had a few unpaid roadies one of them was called Joe and it’s unbelievable what effort he’s putting in for nowt. Well during a song one of our explosions went off at the wrong time and the poor guy gets blown up at the gig. I remember going into The Marsden Rattler pub afterwards and he was standing there his coat was all burnt, the whole top of it was fringed up and he had no eyebrows left’. 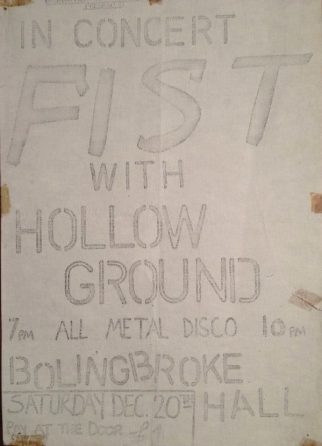 John Lockney: ‘We supported Fist one time, they were in a different league to us. When they went on I remember there was flour bombs from above the back of the stage getting dropped on the drummer Harry Hills head. He ended up being a blur of white as he thrashed around the drums’.

Joe Peterson: ‘A band I was in The James Boys did an audition for the producer of The Tube, and The Tube at the time was the music show. Everybody played live on it, this was the very last edition of The Tube and we passed the audition. We were given our times and dates to go and do it but a few days leading up to the recording we were told that as it was the last show Paul McCartney decided he wanted to appear on the show. So we were dropped and Paul McCartney took our place’.

Duncan Binnie: ‘We were playing Middlesbrough Town Hall which was the biggest gig we’d done ‘cos you’d feel cool, we were playing a stage the size of Newcastle City Hall. But the sound guy was going to me give us £50 and I’ll get you a good sound and I was going we haven’t got £50, it took us all our bus fare to get up to Middlesbrough’. 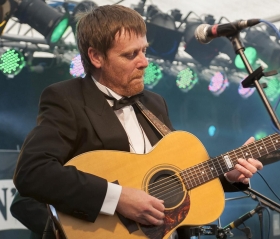 Joe Peterson: ‘Music is such a massive part of my life, that I think it has helped me through some really difficult times’.

Paul McRae: ‘The music, the scene, well it was just our life, everything about it, we were in it from the beginning’.

Robbie Robertson: ‘We just enjoy ourselves really, that’s what it’s about, if you don’t enjoy it you’re wasting your time’.