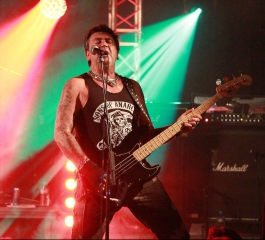 Have you any funny stories from gigs ? ‘I could fill a book really !!! Some of them unprintable haha. But one of the stupidest was when Tysondog were in Scotland and before a gig in Glasgow we were due to be interviewed by the legend that is Tom Russell on his radio Clyde Rock Show. We were trying to find the studio, no sat nav’s in them days !
We stopped in the Clydebank area and asked these young kids for direction, I noticed some of them were carrying guitars. Well years later around 1991 I’m in the Cardiff Post House hotel on business when I get talking to, well pissed really, with Wet,Wet,Wet, yes the pop band.
They had just performed at Cardiff Stadium in front of 50,000 people and after the gig the drummer Tommy Cunningham bought about a dozen bottles of champers in the hotel bar. Tommy says to me ‘Kev I hear you used to be in a band ?’ When I told him yeah Tysondog you won’t have heard of them we were a NWOBHM band from the 80’s.

Well from his reaction he nearly died. He jumped up shouting ‘No fuckin’ way man !’ ..yup …it was him and some of the other lads out of Wet, Wet, Wet, who we’d asked for directions ha ha.
They said that night they tuned in to the radio to hear us being interviewed and were telling everyone they’d met some rock stars haha.
Oh forgot to tell ya that after the radio interview we all jumped into our hotel swimming pool bollock naked. They had security cameras so most of the staff had a good laugh at a bunch of skinny, pissed up, hairy arsed Geordies !’ 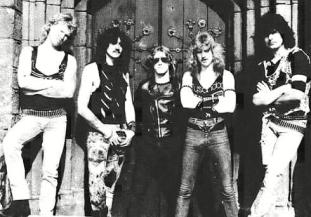 Where did it all begin ? ‘When we were 16 year old we just played the local church halls and youth clubs. Then progressed to pubs in the Newcastle area’

Kevin also talked about his influences…‘Early on I liked Bowie, Queen, Sweet, T.Rex. then proper rock of Deep Purple, Sabbath and Zeppelin. That lead me to heavier stuff like Judas Priest and Saxon. I decided to get involved in playing music after watching my first concert The Sweet at the Newcastle City Hall. They were heavy as f##k !’

What were your experiences of recording ? ‘Our first demo was a live recording of a gig in a working man’s club in Ashington, Northumberland. We sent a copy to NEAT records who had just started releasing heavy metal records. They asked us to record a single there. It was our first time ever in a studio and we came out with Eat the Rich’.

(In 1983 Eat the Rich was released as a 7” single on NEAT records. The studio also released two albums by the band. Beware of the Dog in 1984 and two year later Crimes of Insanity, which included a version of School’s Out, the Alice Cooper anthem).

What are Tysondog doing now and have you got any plans for the future ? Yeah Tysondog released their third album Cry Havoc on Rocksector Records in 2015. In September this year we’ve got a gig at the Gaura metal festival in Brazil with Anvil. Later that month we go to Manchester for the Grimm Up North festival with a few bands on the bill including founder members of Saxon’.

‘Then in December it’s the big HRH NWOBHM festival in Sheffield with Satan, Raven and a few others before a few club shows in Newcastle and over to Holland. Last gig this year is in December with Girlschool, Diamond Head, Tytan, Spartan Warrior and a few others, it’s a great line up at the Blast from the Past festival held in Belgium.
We are busy planning more European dates for 2018. Yeah that’s enough to be getting on with’.