‘I’ve always enjoyed working in studios and confounding the hell out of engineers completely unaware of what was about to hit them. And not once has it ever cost me a penny, always paid for on behalf of individuals holding out for me making them wealthy. No chance! Once I’d had my fun, I was off and as uncooperative as usual’.

In my previous blog about Wavis O’Shave, (Felt Nowt June 6th) I asked, Who was Wavis ? By the end of the interview it still wasn’t clear. Was he a musician, author, performance artist or fraudster ? A mix of all four ?

He had produced a hatfull off records – singles and albums. Appeared on live music programme The Tube. Under the guise of numerous identities he was never shy of promoting his latest gag. This interview looks at the time he spent in recording studio’s. A time that he described as ‘unclassifiable, non-commercial, and a none hit wonder’. Carry on Wavis…
’My, and the unsuspecting engineer’s first experience, was at a 4 track studio hidden in the small village of Wrabgy in Lincolnshire. The unlucky engineer was Andy Dransfield, now owner of luxurious Chapel Studios. Which is a converted church at South Thoresby in Lincolnshire. He has since recorded hits there with the likes of Paul Weller, Wet Wet Wet, Shirley Bassey, and the Arctic Monkeys’.

‘I went down there during the winter of 1979 after being signed up at only my second attempt by a small indie label called Company Records based in Lincoln. The first near miss was from Beggars Banquet, who at the time were too busy with Gary Numan who described me as ‘unusual’ .
Travelling down, there were five of us in the car that conked out alongside the River Trent. Whilst the car was being fixed nobody could find me. I’d gone for a walk across the frozen Trent. I was almost halfway across when the ice all around me started to audibly crack.

Andy might have preferred it had, but instead we recorded the four track Denis smokes tabs (John is a Fig Roll) EP and somehow he and a couple of his worried mates survived the experience of having five unbalanced, wayward Geordies in his small converted barn. We performed like complete rookies within a studio’.

‘Andy couldn’t believe it when I had him splice in the middle of the song Mauve Shoes are Awful, my mate Hatts dad swearing like a trooper. It was on a demo tape we’d caught him on when he’d burst in Hatts bedroom during a take of the song. He was threatening to cut off the electricity and informing us he’d had ‘two stings alriddy’ for his pains. We spliced it in at exactly the point he’d burst in during the demo. There’s authenticity for you.
We sometimes made audible sounds instead of musical instruments and we recorded without a bass. Andy hadn’t experienced working this way before with any band. But he did come round to appreciating that there was some uniquely original method in the apparent madness. He became a bit of fan actually, and remains so today’.

‘In 2005 I freaked Andy out by tracking him down and paying him an unannounced visit at his Chapel Studios. I sneaked in and quietly sat alongside him in exactly the same scene as I had last left him 25 years earlier. When he noticed a presence I just smiled. It was as if time had stood still.

I played him my Katie Derhams Bum cd that I’d just recorded on computer and he couldn’t believe the quality. ‘It’s very Wavis he said. ‘Of course, you twat, ‘cos it is!’ I replied’.

Wavis and Danny Baker from the NME

Did you have any success with your recordings ? ’I’m told the EP in time eventually went on to sell a total of 5,000 copies after being picked up by John Peel and Danny Baker. They both gave it the thumbs up in the NME. Dunno if that was true, never saw a penny, nor cared less.

Classics like You think you’re a Woman ‘cos you don’t eat Fishcakes and Don’t Crush Bees to Death with the End of your Walking Stick entirely threw the engineer Mr Dransfield who was exceptionally patient with his guests. He even ended up playing drums on the Anna Ford’s Bum album that we recorded there the following year. He was a glutton for punishment. The master tapes were bought off him from Newcastle Indie label Anti-Pop for £100’.

‘In those days the Sounds had their own Alternative Chart from record store returns, and the album spent three weeks top of the chart before being knocked off by Adam Ant! I have always been blessed with excellent session men and this was no exception. However, when the guitarist asked me how I wanted the guitar playing on She’s a Prune (meaning could he hear a demo first) I told him ‘Dead fast’ Blank looks all round’.

Did you record in any other studio’s ? ’My next actual studio raid came in 1980 and was at Terry ‘Slippers’ Gavaghan’s Guardian Studios within his terraced house at Pity Me in County Durham. Pity Terry, not me. I called him slippers ‘cos he never took ‘em off.

He was into ghosts and all that stuff and we even had a spool come flying off its reel whilst we were there. South Shields reprobate the late Danny Deen, took time out from his band The Letters and had persuaded some school teacher to stump up £300 for us to make a three track demo there. Danny provided the music and I wrote the lyrics’.

‘I’m surprised we ever got there as I seem to specialise in being picked up by conky out cars. By the time I was picked up at a roundabout, the car was filled with five people, it was falling to bits and was spewing constant black exhaust fumes. Soon after a door came off, and we had to abandon ship when the steering wheel started lifting off. It would have done a circus clown proud. Cue ringing for two taxis.

To amuse ourselves, and my idea, we introduced ourselves as The Nancy Boy’s. We had been really naughty though and hadn’t rehearsed any of the songs so when it was time to record we found out we couldn’t reach the high notes or deal with key changes. Terry couldn’t believe it. I was supposed to sing all three but ended up only doing the last one, It’s so Charming when we’re out Farming. A song about falling in love with a farmyard cow. During the song a stressed Terry had absent mindedly left a microphone switched on which we didn’t realise until it was done, but we managed to get off with it’.

‘Everyone had a go at the other two but the middle one nobody could do. Cue the most absurd moment of my recording career when the engineer Terry even stepped forward to have a go at it and he couldn’t sing for toffee.
We actually had to come back another day with another £200 quid to sort it all out. Whilst we were there Trevor Horn of Buggles fame popped in. He must have wondered what became of the Nancy Boys. If he’s bothered he can listen to a spoof radio interview with me and Danny on BBC Newcastle’s Bedrock show and the songs on YouTube under The Nancy Boys 1980 Wavis ‘O’Shave’. 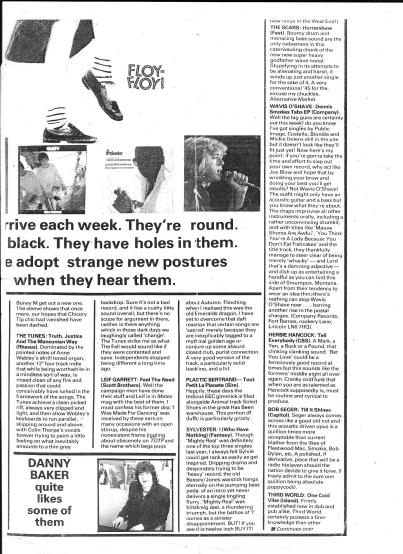 ‘Next free studio for me was a nice little compact effort somewhere in Chester-le-Street where the objective was to record my Texican Raveloni – Bedside Songs for Problem Children album. The artwork drawn by VIZ Comic’s Chris Donald.

I really can’t remember more details about that one, other than the engineer, naturally, was freaked out. My keyboard player caught us all out when he scarpered after two hours to go to give somebody an hour long violin lesson. We had a great session though, containing my craziest material ever.

The content of the album only made it to cassette before becoming a 2005 release on cd by Essex indie label Falling A. The head honcho at the label was a fan who had been born and raised in South Shields’.

‘My friend at the time Toyah Wilcox, had her own copy and asked if she could record her fave track with me, the apocalyptic Better Get the Washing in. Being aware of her own chart success scared me off as I was quite happy being what I preferred to be; unclassifiable, non-commercial, and a none hit wonder.
The album included You Won’t Catch Me on the 503 which is responsible for my greatest number of YouTube hits to date – 400,000 under ‘Phunny angry bus drivers’. The track was once played on Radio One for the first 20 seconds only.

The video for it was made by the 11 year old son of one of my fans! The song was the ‘B’ side of 1982 single, my last ever on vinyl, Tie Your Laces Tight released by Eccentric Records. Now, the rumour remains that it was my mate Jools Holland who played piano on it. Did he? I’m not allowed to say, but if I did, I’ll say he might have…’

Have you any other stories from then ? ’Whilst in London in 1980 I was whisked away from spending time with Ian Dury’s Geordie Blockheads keyboardist Michael Gallagher, and guitarist John Turnbull to spring a surprise stitch up on Jona Lewie.
Jona had built a studio in the basement of his flat. Gate crashing in at 2.30am the whole idea of the somewhat contrived visit (manipulated by Anti-Pop connections) was to bribe Jona into allowing me free studio time. Otherwise we would give a recorded phone call of him to the NME expressing his fears about his hair loss and premature ejaculation. It was a stitch up. Either free studio time or the NME got the tape. 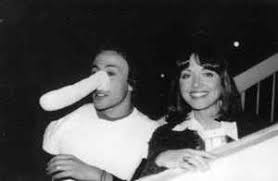 ‘I used to play footy every Sunday on the fields at the Marine & Technical College in South Shields with some regulars. One day this lad new to the area, turned up fresh from a holiday at Butlins in Minehead. No sooner on the pitch, he was excitedly trying to tell us all about this song he’d heard at Butlins and it had been top of their charts for six weeks. It was my You Won’t Catch Me on the 503 song! Imagine his disbelief when one of the lads casually informed him ‘He did it!’ pointing over at me. Against all the odds, as usual. That’s the world of Wavis!