Based in the North East of England Gary is drummer for New Wave of British Heavy Metal band Avenger, who he has played for on and off over 30 years. He is also a member of 4 piece Cumbrian death metal band Repulsive Vision who formed in 2010. Both bands have recently released albums. 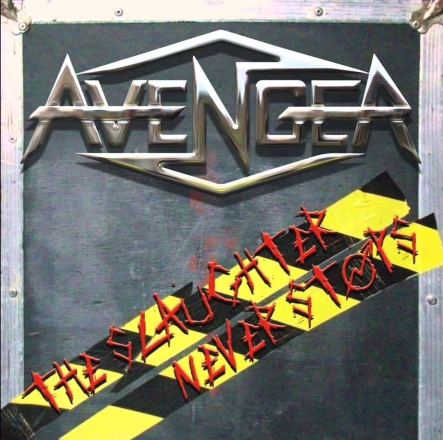 Avenger released The Slaughter Never Stops on Rocksector records in early 2016. Repulsive Vision released their debut album Look Past the Gore, and See the Art on 31st March this year on Danish metal label Mighty Music…(pic below Gary standing on left) 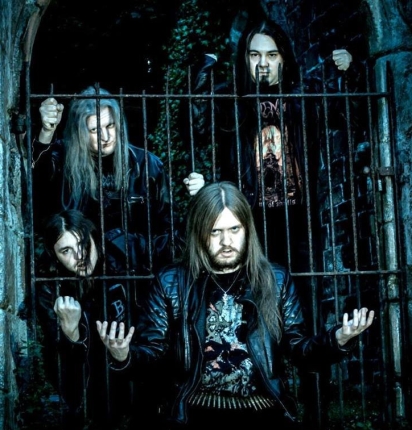 ‘Being lucky enough to get a release from a hard working label like Mighty Music has certainly been a great step in the right direction for us. We have really been delighted with the reviews and positive feedback that the debut has recieved. For Avenger the new album really made it special for us as for quite a few people this was their first introduction to the band’.

If we go back to when you started playing drums who were your influences and how did you get involved in playing music ? ’I started by jamming with a mate from school Dave Burn, who is now a well known and respected guitarist. He is currently lead guitarist for Paul Raymonds band. I think meeting Dave and playing my favourite tunes of the era was what started me off’.
(Nerd alert: Paul Raymond, keyboardist/guitarist began his career in the late 60’s songwriting and performing with bands Chicken Shack, Savoy Brown, UFO, Michael Schenker Group & Waysted)

‘My influences were primarily classic heavy rock bands such as Thin Lizzy, Van Halen and Judas Priest – and a good bit of punk. But my primary influence to form a band, write and perform original music was 100% NWOBHM bands in the Tyneside area during the early 80’s. Seeing those lads get out of the North East and make such a profound impact on the scene worldwide was a huge motivation for me, and that continued after Avenger was formed.

For rehearsals we rented a room at Spectro Arts Center just off Pilgrim Street in Newcastle. A lot of bands those days used that place and it did create a feeling of community for all involved. Curiously this community was going to last quite a few decades although we didn’t know it at the time’.

With bands like Raven, Venom, Tygers of Pan Tang, Fist, Mythra and NEAT Records all based in the North East of England this led to the North East New Wave of British Heavy Metal highlighted by music journalist Ian Ravendale reporting a ’Matrix of Metal Mayhem’ in the 17th May 1980 edition of Sounds. Interviews on this blog have featured all of these bands plus Steve Thompson producer at NEAT Records. 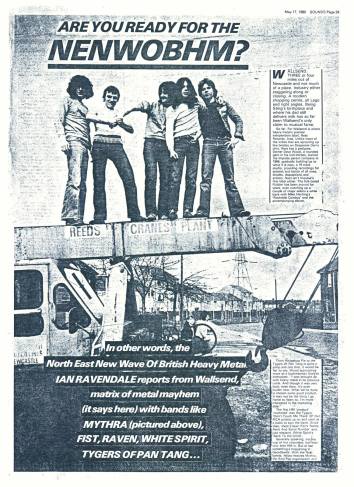 What venues did Avenger play in ?  ‘Early on we used to play popular music venues in and around Newcastle such as the Newton Park Hotel and Tiffanys night club. I was also lucky to get off on tour when I was pretty young and play abroad.

A stand out gig from back in the day is Avengers debut gig in Europe at Dieppenbeek Belgium in ’83. We played as headline band on a show with maybe 7 other bands in what was a large sports hall a bit like The Lightfoot in Walker, here in Newcastle. As our time came to play the crowd started chanting our name – it was unbelievable and a bit scary but once we got onstage it was great. Thanks to social media, all these years later I’m reunited with the lads who organised that show’. 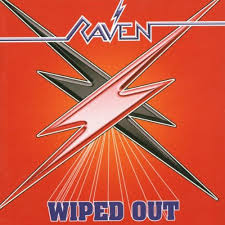 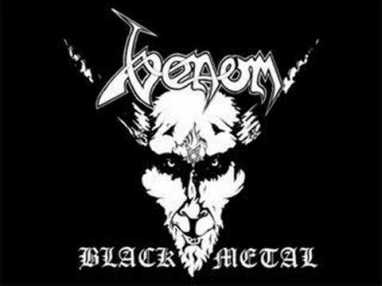 What were your experiences of recording ? ’I worked in the Shipyards near my home town but for about a year before that I worked at Impulse Studios in Wallsend which was where Neat Records were based. Due to this I was involved in a lot of recording sessions and some of them for what are now landmark albums like Venoms – Black Metal and Ravens – Wiped Out. I had my first experiences of recording there with my own bands and helping people out on random recording sessions. They were great times’. 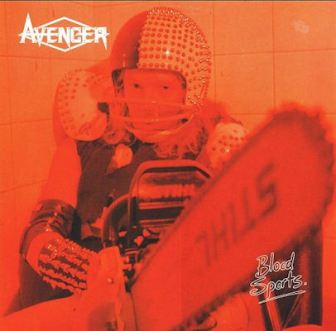 Have you any stories from recording two Avenger albums Blood Sports and Killer Elite ? ‘A long time ago now this Gary! One mad story was Ian Swift (vocals) and Mick Moore (bass) doing a promo interview with Metro Radio for Blood Sports shortly after recording the album. They mentioned on air before the interview Avenger were coming in to the station to talk live about their new album Blood Sports. Well some Animal Rights protesters turned up on the night going mad about us being ‘pro’ Blood Sports -we were like no!! You’ve got it all wrong’. 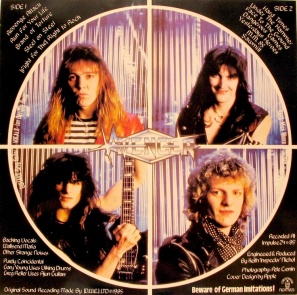 ‘Recording Killer Elite, the most vivid memory was how much Keith Nichol the engineer mentored us during the recording. Encouraging us to try for better takes. Giving opinions on how to improve the dynamics of the songs, stuff like that.

It really brought home to me that there’s more to an engineer than tweaking knobs and sliding desk controls. An Engineer who is a musician will motivate a band and encourage the best performance within a bands ability. Keith done that with us 110%. After that experience I’d always prefer to record with an engineer who is also a musician’.

Did you film any tv or music videos ? ‘Avenger filmed three promotional videos for Killer Elite which was unheard of back then for a band on an small indie label. Venom and their production team helped us out a lot on these shoots especially Venom drummer Tony Bray and their manager Eric Cook. They had done quite a few videos and had a far better idea than us about presentation and all that. They loaned us a fair bit of gear and managed the pyrotechnics for the video.

Looking back they are what they are, very 80’s looking videos but even now people constantly refer to them, so over the years they have been a really useful promotional tool’.

Have you any stories from playing gigs ? ’There’s one or two stories that stick with me….funnier ones like playing with Blitzkrieg at Newcastle University and being paid in bottles of Brown Ale! We jinged down the street afterwards.
Another time playing in Holland when we were young lads. During the terrible winter of 1985 two Dutch girls asked me and one of the lads ‘do you fancy coming back to ours ?’. Being 18 at the time we said yeah. We got a taxi and ended up in a freezing cold rat infested basement under the student hall of residence. ‘Wait here we will see if the Night Porter is about because we can’t have visitors after 23.00’ they said. We waited and waited…Ahhhh it was a set up !…they left us in the freezing basement. This is before mobile phones. It was broad daylight when our Dutch friends found us’. 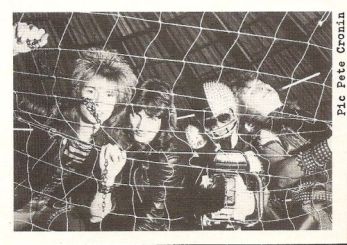 ‘Back in ’83 myself and vocalist Brian Ross were fortunate enough to be asked to play a one off show in Holland with a variety of musicians from other bands. Lads from Satan, Mercyful Fate and Deep Machine’.
(in Avenger at that time, Brian Ross has also been frontman for Satan and Blitzkreig. He features in the blog Life Sentence Feb.20th)

‘We travelled across to the continent which was the first time I’d ever flown in my life. We rehearsed a set of covers for a week then played the set to a full house the following Saturday. It was great fun, it was also the first gig I played where we were all payed a significant fee.

Because of this one off show we managed to return and play three shows ten months later as a full band, one gig in Belgium and two in Holland. This was Avengers first gigs outside the UK and they went really well. So much so that we were signed for three albums by NEAT the day after we returned from those gigs.
We returned to mainland Europe the following year playing more shows in Belgium and Holland. ‘The following year 1985, the band played its first gigs in America but on return sadly the band folded’.

What are you doing now and are you still involved with music ? ’Avenger reformed in 2005 and have played abroad every year since, including our debut shows in Brazil in 2013. We really enjoyed some great gigs for the early part of the promotion of the last album.

Dates that stand out for me was the Triel Open Air just outside of Paris, Rock You to Hell Festival in Athens, Greece and sets at Brofest in our home town Newcastle upon Tyne. Not forgetting the SOS festival in Bury’. 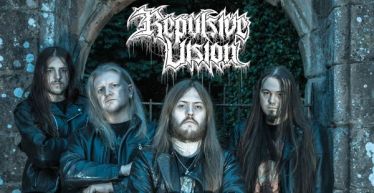 ‘Repulsive Vision has been enjoying several prestigious supports in the last few years playing with their heroes Discharge, Benediction and Destroyer 666. But the gig highlight for sure was performing at Las Vegas Deathfest in June on the same bill as Vader, one of my personal favourites. That was absolutely great. Both bands have recent promo videos up on You tube for the albums and a quick search takes you straight to them for anyone who would like to check them out’.