In a previous interview on this blog (Chain Reaction, May 21st) Neil said…’After Pure Overkill we thought things were starting to happen, the bloke who ran Guardian Studio asked if we wanted to do a full album, we said yeah let’s go for it’. Based in Sunderland North East UK, Spartan Warrior recorded 2 albums in the 1980’s, ‘Steel ’n’ Chains’ on Guardian Records and ‘Spartan Warrior’ on Roadrunner. They also appeared on compilations ‘100% Pure Metal’ and ’Pure Overkill’.

The band are still playing live so I got back in touch with Neil and asked him how long does it take to prepare for gig’s ? ’Well the amount of preparation depends on the gig really. Gigs abroad are definitely more complex as we have to book ferries or flights and there’s usually travel to the airport or ferry terminal to take into account. For a lot of gigs that involve the ferry travelling through Dover is usually the cheapest, which for us in the North East involves an overnight drive to get an early ferry and then drive to a gig.
There’s been times I’ve set off around 9pm on a Friday evening and drove to Dover for an early morning 6 o’clock ferry which gets us to Calais for 8am allowing for an hours time difference. Then drove to a gig and literally gone straight on stage to play having not slept a wink. I’m certain that’s a situation that’s not unique to us’.

‘Also if we need to hire a van it can be a lot of work – you wouldn’t think it, but it is. Also with a van comes a higher cost on the ferry. The whole thing can be a lot of work and probably way more involved than people think. So far there’s been no problems apart from the time Dan decided to wear his bulletbelt going through Heathrow airport ha ha – he actually put it through the scanner. He was lucky to make it to the gig that time and I was sat in the airport thinking how we could busk the gig as a four piece’.

Is there any difference from coming of stage now to when Spartan Warrior played their first gigs ? ’There’s a definite difference. These days after gigs people want to talk and meet us and even sign stuff for them which is really nice’.

What kind of ages are in the audience and do you see familiar faces ? ‘We get all ages at festivals I’ve seen old blokes – like me – and parents with babies with ear defenders on. Its quite a small scene so you do get to see a lot of familiar faces, a lot of them are now friends’.

The set list, how do you decide what goes in/out, is tempo important to the order, how do you choose the first and last songs ? ’Putting a set list together is usually a joint exercise. Theres a core of songs that we class as must do, the one’s we think people expect to hear us play. Other than that we try and switch the set up as much as possible so that people who’ve seen us before will get to hear something different. Tempo is important and we sometimes try and run songs into each other.
Playing the gigs we do and with 4 albums worth of songs we usually have limited time so we try and play as many songs as we can. Both first and last song we try and choose something that will hit hard from the off. I remember reading something that had been written about us at Headbangers Open Air festival in Germany, they said Spartan Warrior opened with Stormer, ‘and nearly ripped my head off’. Well that was job done and exactly the reaction we wanted !’ 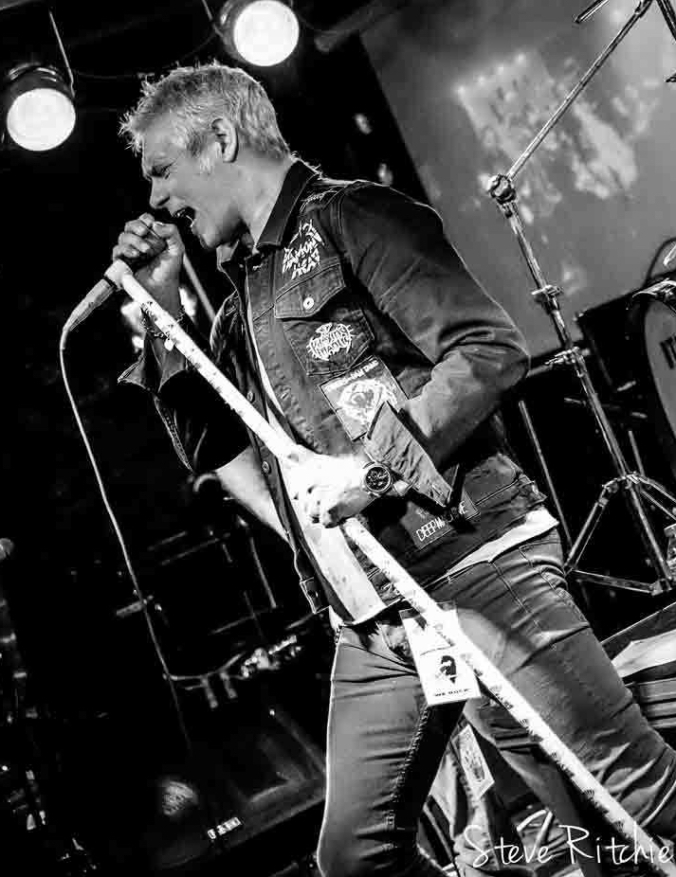 In the coming month’s Spartan Warrior have a few gig’s coming up are there any that stand out ? ‘We’ve got the Trillians gig in Newcastle in November and we are looking forward to Grimm Up North which is a charity event’. On September 30th in Bury is the Grimm Up North Festival. On the bill are fellow NWOBHM bands Salem, Weapon UK plus a whole host of others who are coming together to help Steve Grimmet vocalist from Grim Reaper who tragically lost his leg while on tour in South America…‘We are really looking forward to those gig’s, not just because we are playing but we also get to catch up with loads of mates in bands who are also on the bill’.