‘We recorded a version of Addicted to Love by Robert Palmer, the record company banned it and stopped it going out cos we changed the song to Addicted to Drugs.

We done a gig at the Marquee in London and it was one of my dreams to play on that stage.

’I’ll tell you about the inspiration that started me out on the long road to rock n roll. After 25 years I’ve released a new album. It’s a follow up to the noise I created in the 1980’s.

On the album I’ve got a few friends and guests like Fast Eddie Clarke from Motorhead, Lips from Anvil and Paul Gray on bass (UFO/The Damned) he wrote Do Anything You Wanna Do.

I remember as a 14 year old boy in a cafe skiving off school I heard Eddie and the Hot Rods on the radio singing Do Anything You Wanna Do. That’s where it all started. The rest is history’.

How did you get started when you were young?

‘I could play bass guitar but drums appealed to me simply because they were loud and I didn’t want no 9-5 fuck that. I could create more mayhem than I even did at school.

I wasn’t influenced by any drummers, I have my own style, possibly Rat Scabies from The Damned if anyone.

I started off in local shitty bands when I was around 16 they weren’t much but the first name band was Major Accident. We supported Chelsea around the UK.

I was very young and enthusiastic wanting to get on but you know with some bands it just doesn’t work I got on really well with the group but thought I wanted to go up to the next level.’ 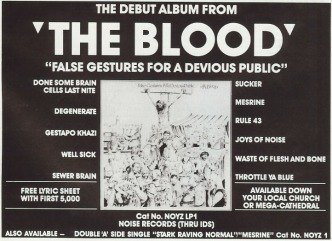 During the early 80’s you were living in London, what was the scene like ?

‘Yes we were having a good time in London, however I went there for a reason, to further my career and experience. I went out drinking around Soho with the Stranglers and Motorhead.

There was a band called The Blood who were talked about as the next big thing. I joined them and cut an album False Gestures for a Devious Public which is regarded as a cult classic now.

It got to number 62 in the album charts. But after some internal fighting I left the band and joined Angelic Upstarts’.

Was that a case of out of the frying pan and into the fire ?

‘No I got on well with my old mate Mensi. We toured all the time, on my very first gig Mensi the singer said ‘get yersel ready cos in a few days we’ve got a little gig up in Leeds’.

I was still living in London and I went round to Algy Wards place (The Damned bassist) just around the corner from where I was living and told him about this small gig we’ve got.

I’d never played live for about six month cos I’d only recorded with The Blood. Algy said, ‘what? no the gig’s at the Queens Hall – it’s called Christmas On Earth it’s gonna be the biggest punk festival’.

On the day we arrived at Leeds there’s huge Trans Am trucks inside the place unloading the gear, the place was massive. We ended up second on the bill.

There was The Damned, Chelsea, Anti Nowhere League, GBH, UK Subs a few more. On stage you could feel the power of the audience. 15,000 people bouncing… a little gig in Leeds!’.

‘But I wanted to try a few more of my own ideas you know, fronting my own band. So I formed a three piece mixing punk and metal – the way no one had done it before.

Metal riffs and intellectual lyrics that stank of the street. Not at 10 but hitting the volume at 12, thrash wasn’t even invented then.

Around early ’84 I came back up North and signed for Neat records, this was the beginning of Warfare. Neat was known as a very loud label, no commercial releases, you’d always be garaunteed to get yer ears blown out.

A lot has been said about Dave Woods the label owner, some stuff I’ve heard about his dealings with bands. But personally I got on with him.

It’s how you do business together isn’t it – he put me on a wage, because that’s what I asked for. We’d go out for meals, he became a family friend.

Anyway we went in the studio and recorded the first single Noise, Filth and Fury. On guitar there was Mantas from Venom, Algy Ward from The Damned on bass, and I did drums and lead vocals’. 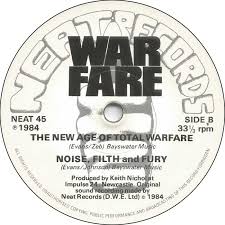 (Nerd alert:The 7” three track ep single was produced by Evo at Impulse Studio’s, Wallsend the home of Neat records, and released in 1984.

A side Burn the Kings Road, b side The New Age of Total Warfare and third track Noise, Filth and Fury.)
‘That immediately got to number 2 in the Heavy Metal charts. Then we cut the first album Pure Filfth’.

‘The second album was Metal Anarchy and iconic Motorhead man Lemmy produced that. Tracks like Electric Mayhem, Disgrace, Living for the Last Days, a big seller along with Venom and Raven.

You know looking back Neat had some good bands on the label, but if you really wanted your music big, angry and fucking loud that’s where Warfare, Venom and Raven came in. We didn’t take any prisoners’.

Any memories from that time ?

‘This one was fucking chaos. Typical Warfare. We played Newcastle Riverside and didn’t get paid. It was supposed to be 50/50 split on the door but the Riverside were letting in people free as a promotion before 8pm which I was never told about and certainly never agreed to. It all ended up in court.

Anyway, when they didn’t pay we went mad, headbutting the manager, pissing in the amplifiers, smashing a huge hole in the centre of the stage, the crowd pulled the speakers off the stage.

I smashed a bouncer in the face with a bass guitar. We created absolute mayhem.

Same when we went to Holland, we gigged there, and the same sort of thing happened. We threw real pigs blood at the audience. It was mental in Warfare – that’s what I wanted it to be – totally over the top. Gleeful and all in a day’s work’. 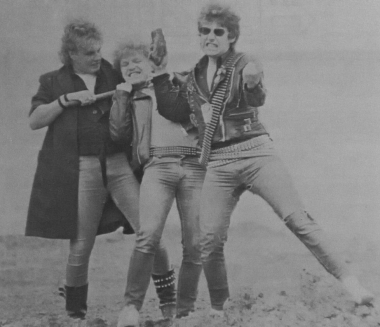 What’s changed in the world of Warfare, why choose now to release an album?

‘Back in the early 90’s I got really pissed off with the industry, I had run out of ideas, I wasn’t a young kid anymore, it all came to a head really, so I decided to stop.

Over the 25 years since, I’ve been offered jobs with name bands, guest vocals, producing albums, but always turned them down until I had a dream one night. No, seriously. I was in a band again. On stage, the lights, the noise.

When I woke up it was like the dream was still there. So I dragged my bass guitar out of the garage, I didn’t have an amp so I went to see my mate Fred Purser at his studio (ex Penetration, Tygers of Pan Tang) we knew each other from way back when we were starting out.

Plugged into a valve amp hit the first chord albeit a bit rusty and blew everything off the desk haha.

He said ‘Evo can you not turn that fucker down ? I said ‘no, on the contrary Fred, I’m going to turn it up haha’. Then the noise filth and fury was back in my polluted bloodstream’.

Next stop was writing and recording during 2015 & 16, after hearing the newly released Warfare album on High Roller Records it sounds like he was having a blast, ironic that one of the studio’s was Blast in Newcastle.

Friends including Nik Turner (Hawkwind) Fast Eddie Clake (Motorhead) and Lips from Anvil making appearances. The album was also recorded at Wild Wood studios and at Trinity Heights, the home turf of Fred Purser who supplies guitar on two tracks.

The first ‘Screaming at the Sea‘ a spoken word intro and bang into the attack of ‘Cemetery Dirt’ and attack again, again and again.

Fast Eddie Clarke plays guitar on ‘Misanthropy’ ….’Step into the Fire they do as they are told, Greedy for a future always fighting for some gold’ …sounds like a scathing attack, look up the meaning of Misanthropy – well what else you got ?

Religion and the clergy are in the crosshairs on ‘Black’ and Evo keeps up the relenting pace from the spoken word first track, until the perfect book ending to the album ‘Stardust’ which offers a nice escape route. It must have made an impact – it will for you.

‘I asked Lips from Anvil to do a spot on the album he agreed straight away, great guy. I liked Anvil cos I always thought they were the first thrash band with Warfare being the first punk metal band.

And we’ve got Nikky Turner from Hawkwind on the album that driving bass from Lemmy and the powerful sound they created’.

Have you any future plans for Warfare ?

‘Well the album is out now and doing very well but I’ve no plans as yet to take this out live, I’ve been offered shows, but nothing has stuck with me yet. I’m looking to do some producing work, maybe if the right act comes along. I’ve got a top-class engineer working alongside me so yeah looking to get into that side of the business.

Counting back, I’ve recorded 17 albums in my career. I‘ve had quite a journey in music and a load of experience to take forward into production. I may consider doing a guest vocal or two’.