Based in Durham City, UK, Lowfeye are musicians Alan Rowland and Carol Nichol…

‘Initially I write the songs on piano or guitar. Alan plays the bass and drums then put’s it all together in his home recording studio.

Lowfeye’s new album Pow is due for release very soon and initially it got interest from BBC Introducing after I wrote a track called Demons based on the character played by British actor Tom Hardy in BBC drama Taboo’.

Is there any producers out there looking for a soundtrack ? Impressive stuff from the dark duo, and the BBC interest was entirely justified.

‘All styles on the album are completely different to each other because I am a lover of music and its history. I can appreciate all the years of amazing music styles.

A track on the album could be a dark Nick Cave style song, set to heavy guitar like Search and Destroy by Iggy and the Stooges. Or a film sound track style from the 60’s. I write how I feel and we try to capture those elements in our production.

The track Pow is very haunting and it’s based around a girl who is is trapped in a volatile relationship and is crying out to her mother. The chorus Pow in one word captures the cry for help.

Another song I wrote was Poor Little Rich Girl and is about Andy Warhol’s relationship with Edith Sedgewick who became his muse in his film Factory Girls.

Her addiction and child abuse were covered up leading to her death at a young age. In the end Warhol dismissed any involvement in her life.

Other songs can be political or critical of society. I find the mainstream music scene along with TV celebrity’s awful. It’s bland, its beige, it’s plastic and unfortunately we are spoon fed this crap by radio and tv.

Some songs can be slightly humorus which is like my track Beautiful World ‘Now the worlds run by millionaires they can take from you in a blink of a stare and they walk like dogs in a beautiful world’. 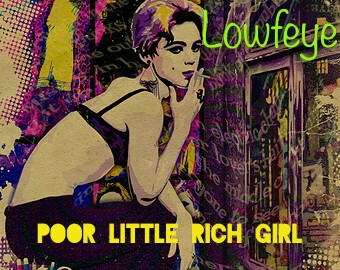 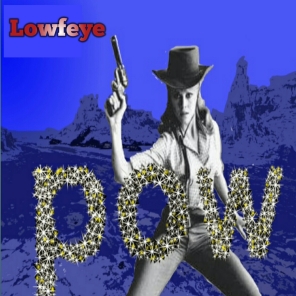 Who were your influences in music ?

’I was brought up by an eccentric mother who brainwashed us all with diverse sounds so I’ve never been in a box listening to one style.

My main influence as a kid was David Bowie, Ian Dury and the Blockheads, and Kate Bush – especially as she was a complete one off. She probably inspired me to get into music.

But I hated anything trained, as I’m a self taught musician and perform how I feel at that time. You meet too many musicians who have become manufactured and it’s boring.

To be honest I was a John Peel fan as he looked for something different in music and not the obvious, discovering amazing bands which really influenced me growing up’.

‘I think you go to see a band as well as hear them. I struggled with dyslexia and I am 90% visual, so a real lover of front artists like Ian Curtis, Dave Byrne, Jaz Coleman, Lux Interior, The Cramps, Iggy, Dead Kenndeys and X Ray Specs.

As a very young girl I particularity got blown away with the birth of punk not only in the UK but in America. I found it exciting with all that energy, and loved the rebellious side to it. Still love it today.

I also front an original punk band The Relitics formed by Mick Hall in 2015. We have been supporting bands like the UK Subs, Chelsea, 999 and we did Rebellion 2017.

It’s all good fun as you find people that are aged 40 plus have more passion to get out there and perform original music and have a voice in today’s beige society. The Relitics have released an album and vinyl and due to release a second album soon’. 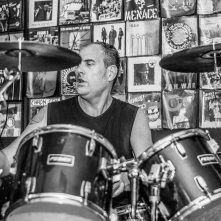 When did you start in music ?

‘I have been in bands all my life. My first band was when I was 14, then I joined Gerbils in Red Wine. We used to rehearse down the Fowlers Yard in Durham which is home to Prefab Sprout and The Toy Dolls.

We done a gig where a girl at the front dragged me off stage by my hair. I was a skinny little thing at the time but I managed to punch her giving her a black eye. She was a big lass and she didn’t half hit the floor. The door men at the pub where laughing more than anything.

In 1992 an A&R guy linked to ZTT records put me forward as a backing singer for Seal before he shot to fame. The European tour was for 30 day’s in Germany, France, Holland, Spain and Sweden. That was a great time.

I remember playing the Ewerk centre in Koln with Lloyd Cole supporting and after the gig ended up getting smashed on tequila and waking up with a shower cap on my head haha. I had a chance to go on tour again but declined as my father died suddenly.

After that I joined a band The Faraway Tree this was with two female vocalist’s, myself and Rebecca Crawford who now lives in Perth, Australia.

We played a number of gigs and appeared on Tyne Tees TV entertainment show East Coast Mainline. I have played most venues in the North East especially the Newcastle Riverside in 1990’s and continue to go and see a lot of bands.

I like the small venues better, the more intimate places the better for me as it captures the atmosphere at gigs’.

Have you always been involved in music ?

At the time I was in a band formed by Chris Labron who played keyboards for Warfare. We played Stockton Festival and showcased bands and dj’s at the event.

We also had guest speakers at Circulation Records like Bruce Dickinson, Simple Minds manager and Julian Cope. We arranged bands to perform with Slash and Snakepit in Berlin’.

Have you filmed any TV appearances or music video’s ?

‘I wrote a song called Individuality and performed that on Tyne Tees TV programme East Coast Mainline, which led to being asked to sing a wartime song in a Catherine Cookson period drama, and be an extra singing in it.

On the day of filming, actress Catherine Zeta Jones was complaining about not being asked to sing the song and said she had a single out at the time.

We all ended up standing around the piano singing it with the camera on her and my voice in the background’.

What are your future plans?

‘Lowfeye album Pow will be available soon digitally on Spotify, iTunes and hard copy. The sleeve artwork was done by Rebecca Crawford who was in The Faraway Tree with me.

She teaches Art & Design out in Australia and features on one of the songs we recorded when she came over this year.

We are already working on the second album. You can find Carol Nichol and Lowfeye on Facebook and You Tube.

I will also be doing regular gigs with punk band The Relitics in North East venues, and hoping to be playing Lowfeye gigs next year after the album release.

A lot of the songs are targeted at soundtracks for film and TV – Peaky Blinders next year, you never know’.