After nearly 40 years hard work and dedication Mark Woodhouse is still drumming in a pub near you.

‘We once got called White Mice by a free newspaper in Durham despite spelling it phonetically over the phone. Several times. Hardly a name to fetch the leather clad Metal hordes out to see us!’ 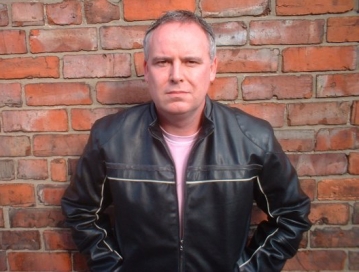 Heavy Rock had a big following on Tyneside, and South Shields was no exception did this genre of music have a big influence on you ?

‘It was early ’80s I was heavily into AC/DC and listening to the Friday Rock Show which got me into Metal. By the time we got a band together I was on drums almost by default because everyone else either played guitar or wanted to sing!

I’ve never been a special fan of any particular drummer, it’s always been the music they were playing that I enjoyed and took influences from.

Which is why one drum fill I often pull out of the bag is a close variation on what the guy on the first Go West album used to do ! Admittedly not very Metal but it works a treat’. 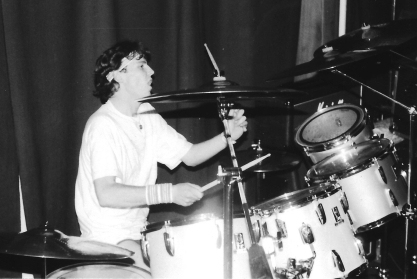 What are your earliest memories of drumming ?

‘First drum kit was a Frankenstein drum kit from the West Park Community Centre in South Shields. It didn’t have any stands to speak of, the bass pedal broke after a couple of weeks, so for a year I played drums without a bass pedal.

From an influence standpoint, I ripped fills wholesale from Accept”s Restless & Wild album, and I spent many hours playing along to tapes of Judas Priest albums.

We eventually got a band together and the nucleus was me and Steve McGinley. We went through a few names, at that time we called ourselves Trias, and there was a revolving door of members before the next permanent member Dave Johnston came in on bass.

Barry Marshall joined on guitar and the final piece in the jigsaw was Tess Mulligan who took up frontman duties. This became the classic White Vice line up’. 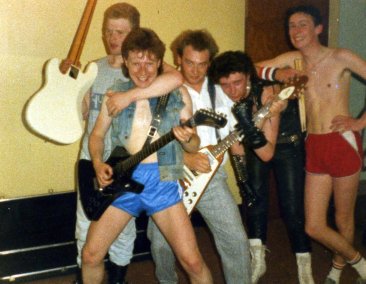 Where did White Vice rehearse and what can you remember from then?

‘In terms of rehearsal rooms White Vice used the Martec club, Baker Street and The North Eastern pub in Jarrow. That pub was brilliant. It was always freezing cold in the room we were in and over the top of the door there was an extension cable running from the bar.

We’d be pounding drums, screeching guitars, laying out some serious slabs of prime Heavy Metal at full volume. Then nip into the bar for refreshment only to find a smokey room full of old Jarrovians in flat caps playing dominoes, supping pints and smoking rollies.

Totally detached from what was happening next door. Even though it sounded like armageddon through a couple of 100watt Marshall amps.

I often wonder how we found these places and organised rehearsals given that it was before the Internet, social media, mobile phones etc. The organisation around the band must have all been done word of mouth, and the same for every other band around that time’.

‘I did a couple of recordings with White Vice and punk band The Fiend. We recorded the first White Vice demo Thrash On Delivery on Easter Sunday 1986 at Desert Sounds in Pelaw.

It included the songs Hard Rocker, Sacred Armageddon, Breaking Ice and Death From Above.

Then we went into Baker Street Studios on the Bede Estate in Jarrow and did the Hot Day In July demo on Sunday 5th July 1987.

We recorded five songs in that session The Death Mosh, The Beast, The Time To Panic (Infectious Terror), and Search & Destroy.

Both White Vice demos were done from scratch in one day from probably mid morning until about 9pm. The Fiend ones I did took a little longer, probably a day and a half.

But for the first Fiend demo I did my drum tracks and had to leave the studio to go back to work for 1pm. So I had no further input and the next I knew of it was when the tape was put in my hands!

‘The second session might actually have taken longer as the band had to go back for guitar overdubs as there was a distortion problem on the mic.

Baker Street was a very high tech studio, in a local sense anyway and as for the recording, we were told it would be alright in the mix !’ 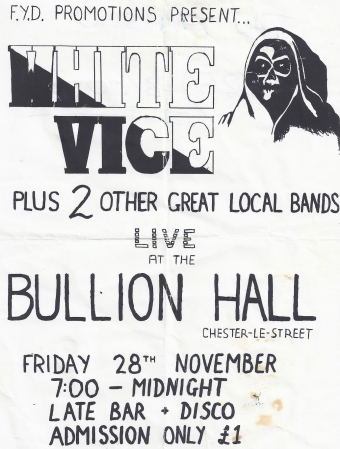 Have you any stories from playing gigs ?

‘Around 1986 we did most of our socialising in Durham and Chester Le Street especially at the legendary Greenbanks Rock Night on Mondays.

We had tracks from our demo played there regularly and this led to gigs in Annfield Plain, Willington, Washington Arts Centre and Fowlers Yard in Durham.

Some of our most notable gigs were self promoted, especially at The Bullion Hall in Chester Le Street where we employed DJs, a bar manager, door staff, PA and lights.

Some of the bands that supported us there were Acid Reign and Battleaxe, who were New Wave Of British Heavy Metal legends and local to Chester Le Street.

We headlined what turned into A Battle at the Bullion in Chester Le Street November ’86 where Battleaxe were squashed on the bill in between our band and Pulse, also from South Shields.

Let’s put it this way I don’t think Battleaxe took too kindly to being turned over on their home turf. Also at that gig was Karen McInulty she came as a guest of our singer Tess.

Karen was vocalist for She, who recorded at NEAT records. Tess told me that he met Karen in Trillians Bar, Newcastle, he was putting studs in his jacket, sang a few lyrics to her bought a few drinks and she fancied the gig’.

‘While we played she sat at the desk with the soundman Howard Baker. Karen told us later on, that our set was tight and intense, like seeing Metallica walk onstage. She was surprised this was only our sixth gig, I’m pretty sure it was meant as a compliment.

A mad song title we had was Metal Minstrel ! It started with a clean guitar playing like a 16th Century lute, then the distortion pedal was pressed, then I simply had to play as fast as I possibly could. We used the same “wear Mark out after a slow start” technique for a few songs’. 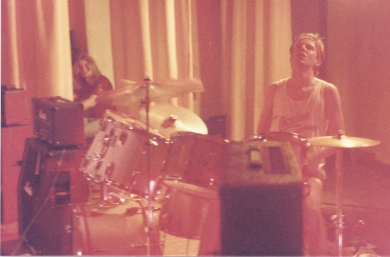 ‘Howard did live sound for us a few times, he had an old ambulance van that he ferried us around in, we were packed in the back with the gear.

Don’t forget that he had Baker Street Rehearsal Studios where we practically lived as a band for about two to three years. Then around ’87 he added the recording studio plus he opened Baker Street Audios in South Shields’. 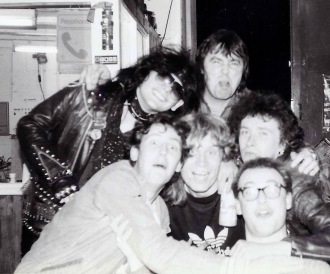 How long did White Vice last ?

‘Around this time our bassist Dave Johnston left so we enlisted a Chester Le Street musician known only to us as Space Debris. Yep really.

But very few gigs followed and the loss of Tess on vocals pretty much put paid to things. His swan song was the Hot Day In July demo. Once Tess left the feel had gone so by 1988 the band had run its course’.

What are you up to now and are you still involved in music ?

‘Me and Barry Marshall have played together for the last two and a half years in Classic Rock Covers band Andromeda. I also play in a band called The Spacehoppers with bass player Ed Thomas who was in Shields bands The Cups and most notably Gunslinger, which is a whole other story!’  (See next post for an interview with Ed Thomas.)