Where did you rehearse and when did you start playing gigs ? ‘At first we’d rehearse at low volume in various band members bedrooms, with the drummer keeping time by slapping his legs, then he graduated to using a dustbin. A couple of times we rehearsed in a garage belonging to Ginger’s parents.

I was 18 when I played my first gig with The Cups a bit of a South Shields supergroup that lasted until ’86. Guitarist Ginger and Stidi on drums both going on to be in The Wildhearts. Then I joined Gunslinger in ’88 and we used Baker Street Studio in Jarrow to rehearse until our singer Macca’s brother opened The Rock In, also in Jarrow. I lasted in them till 1990’. 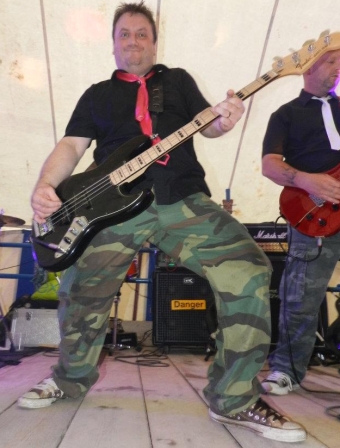 How did you get involved in playing music ? ‘When I was fourteen myself and most of my friends all wanted to play guitar. It seemed that everyone did back then. I think it’s because we had nowt else to do! There were no computers or consoles and only 3 channels on the telly. All we had was music and it was only natural that we’d want to emulate our heroes’.

Who were your influences in music ? ‘I was a massive Kiss fan and I loved Ace Frehleys loose, laid back style. Low strung Les Pauls, man, you can’t beat ’em! Although I play bass I didn’t really have any bass influences and I started playing by accident!

I knew Ginger from The Wildhearts when we were 16 and he wanted a bass player for his band so he asked me to do it cos he said I was a crap guitarist. To be fair, he was right, so I suppose he was the reason I started playing bass and kept at it because I found it to be much more fun than guitar!’

What venues did you play ? ‘My first gigs with The Cups were at The Legion club and The Cyprus pub in South Shields, wild nights in there! There were a few great venues in Shields in the Gunslinger days, Fist drummer Harry Hill had just opened the Queen Vic and that was a favourite, always jumping! There were also Cagneys in Tyne Dock and Laceys in Laygate! Quality! Heh heh. In Sunderland there was the Old 29 of course and I think it was called The Ivy House’.

Gunslinger with Ed in the middle.

What were your experiences of recording ? ‘I only recorded a couple of times with Gunslinger. Once in ’88 at Baker Street Studio which had all the cutting edge gear but we couldn’t seem to get the sound we were looking for so it was a bit of a disappointment. Tracks were Holdin’ On, She Said and Gunslinger.

Then around ’89 we recorded twice in Micky Clark’s little 8 track studio in Frederick Street, South Shields and those recordings were much more successful! Much closer to the edgy feel we wanted so we done Gunslinger, Holdin’ On and She Said along with High Risk, Broken Dreams, Falling to Pieces, I Got a Feeling and I’m sure there were one or two more thats coming back to me, yes Shock Treatment, Play it from the Heart and Nothing to Show. But yeah really enjoyed that session’.

Have you any stories from playing gigs ? ‘The Ivy House in Sunderland! I think we were the first band they’d had on there so they had no idea what to expect. We got in trouble for parking outside. The landlord wouldn’t let us use the front door so we had to go in through the cellar and up the steps into the bar, and he nearly had kittens when he saw our gear. He said ‘that lot looks far too loud for in here’.
It was only a little place so we stashed our guitar cases in the cellar and by the end of the night we’d had enough hassle from the fella so we filled our cases with cans from the cellar and carried our guitars out separately!’ 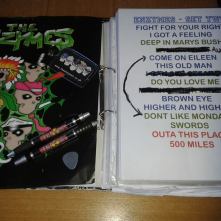 What are you doing now and are you still involved with music ? ‘I had an 8 year break from music after Gunslinger. I got a proper job and everything! Back in 2000 though I felt the urge and to be honest it never really went away. I’ve been in cover bands ever since, Kneejerk Reaction around 2003-09 then The Enzymes until 2013, Horizon from 2012-16, The Rawmones for one year in 2012 and at the moment I’m playing in Andromeda and The Spacehoppers, as well as helping out with my mates PA hire business. I’ll be involved with music til the day I drop!’