‘Our influences were watching UK music programme Top of the Pops and listening to Elvis, Slade, T.Rex, Deep Purple and Sabbath.

That spurred us on to start a band at school in 1974 – and we just kept going! Tracey’s dad played in a brass band and our parents funded the band and encouraged us. They also got us gigs’. 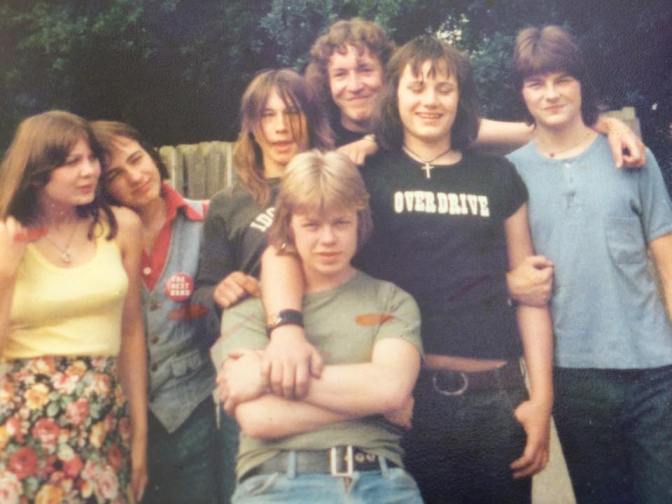 ‘Our first gigs were in the Workingmen’s Social Clubs in Sheffield, Nottingham and Leicester. Then we went on the same circuit as other NWOBHM bands – places like the Penguin Club, Lead Mill, Monsal Head and other’s.

We supported many bands including Def Leppard, Bernie Torme, Raven, Lionheart even Freddie and the Dreamers.

We had a gig once at Rotherham Arts Centre and due to homemade pyrotechnics, the show was stopped by the fire brigade. Recently the best gigs we have played have been in Europe, the fans really know how to rock!

Overdrive self-released music under their own label Boring Grantham Records. First was a demo tape in 1978 with the tracks All Day, Overdrive and Once in a Dream Piebald Pinto. This was limited to 50 copies.

Next release was a 7” single in 1981 including On the Run, Nightmare and Stonehenge. More releases followed.

What were your experiences of recording, and did you record any TV appearances or film any music videos?

‘Now with modern technology it’s all done on a laptop in our kitchen, but recording was strange in the early 1970’s. The engineer wore a lab coat and treated it like a serious school project. Recording was a mystery to us.

Our first recording was in a place called Drumbeat Studios in Leicester in 1976. Funnily enough the same studio Showadywady did their first album.

We have never worked with a proper producer until our last album, which was mixed by the Dark Lord himself, Chris Tsangerides (RIP). We’ve never been on TV or done a video. Just too damn ugly!
(Chris Tsangarides was best known for producing heavy metal albums by Tygers of Pan Tang, Judas Priest, Anvil, Thin Lizzy and more. He has also worked with pop and alternative artists Depeche Mode, Blondie and Lords of the New Church).

What are the future plans for Overdrive ?

‘We are now recording our sixth album, with the title Resurrection. Also planning gigs for 2018, with Greece Germany and Italy on the itinerary’.