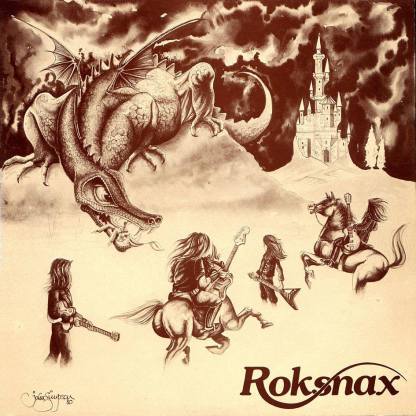 South Shields is a small town on the North East coast of England. During the 1970’s it’s main employment was heavy industry. Shipbuilding and coal kept the workers thirsty. Pub’s and clubs were doing a roaring trade with entertainment from local rock bands. Heavy riffs and pounding drums were echoes from the pits and shipyards.

By 1980 the New Wave of British Heavy Metal had rolled in. The sound waves crossed the Atlantic and landed in a garage in San Fransisco. Metallica were born, and went on to become the biggest band of the genre. Not far from that garage lived a young Nick Vrankovich. Nick is now at Buried by Time and Dust Records who have re-released Roksnax, one of the albums that helped kick start the New Wave of British Heavy Metal.

Originally released in 1980 by Guardian Records, the compilation album was produced by Terry Gavaghan. He recorded 3 North East bands at his studio in Durham. Teesside based Samurai, and from my hometown South Shields, Hollow Ground and Saracen. The main players behind the re-release take up the story… 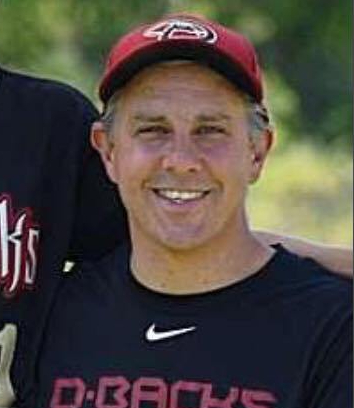 Nick Vrankovich (Buried By Time and Dust Records): ‘One night not long ago, I was sitting drinking some Newcastle Brown and spinning some of the compilation albums I had from the NWOBHM time, Lead Weight, HM Heroes, Metal for Muthas, all packed with songs that meant so much to us. Then I played Roksnax and I was quickly reminded of two things. One was that all twelve songs are incredible. When you talk of the magic of heavy metal or the mysticism of the NWOBHM surely they must be referring to releases like this.

The second was how obscure this one was compared to the others. I made a clear decision that night to contact the bands to see if we could make this masterpiece available again. When I got in touch with the guy’s I found the willingness, generosity and honesty incredible. Even though I’m now over 50, these tracks mean as much to me as the day I first held the album all those years ago’.

‘By the end of 1980 I was 13 year old and not yet aware of the New Wave of British Heavy Metal. I was into Kiss, Van Halen and shortly after Black Sabbath would change things for me in a big way. By the end of 1981 I discovered the Record Exchange in Walnut Creek, California which is about thirty minutes outside San Francisco.

The second I entered the record store an obsession would be born. The store was heavily stocked with all the latest imports and cutting edge heavy metal from the UK and Europe. The extreme appearance and imagery of bands like Venom, Mercyful Fate, Angel Witch and countless others was something that fired my imagination and created an obsession that continues to this day. The fact that the music was so fantastic and really heavy only added fuel to the fire’. 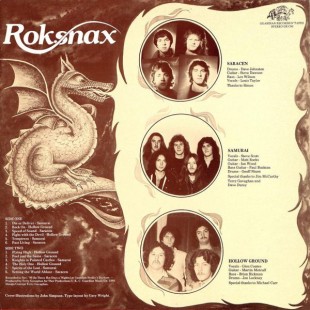 ‘The Record Exchange is where I first remember seeing the album Roksnax. It was an import which meant the price was $9.99 which was a huge sum of money for me. I remember looking at the photos on the back, it all looked so old and obscure. I was unsure what it would sound like. I had not heard of any of the bands on the record and of course it was next to impossible to find out about them unless they had a record deal. Sadly, this time I never bought the lp’.

‘The release disappeared into obscurity and was forgotten about until one day my brother scored a copy of the single Warlord by Hollow Ground. Needless to say we were overwhelmed with how great it was and amongst other NWOBHM singles, it was right up there with Mythra and Witchfinder General.

We knew there were extra tracks from Hollow Ground on the Roksnax album so we hunted down a copy. We eventually found one and heard the instant magic from the Hollow Ground tracks. We were equally crushed by the Saracen and Samurai tracks. The speed of Saracen with the killer Dawson guitar riffs and soaring vocals from Lou Taylor was not only trailblazing but still raises the hair on my arms to this day. Samurai was undoubtedly the most obscure band of the three but their heroic sound was also incredible’.

Martin Metcalf (Hollow Ground): ‘I remember the buzz of being involved in Roksnax. The whole experience of being in Guardian Studio’s during November 1980 was magical. We met up with producer Terrry Gavaghan and talked through the idea of a compilation LP with a couple of other bands from the North East. Our mates from Shields, Saracen were also on the record.

We were in the studios for 2 days and slept overnight there. The studio was basically 2 terraced houses knocked into one. I still remember the brown cork tiles in the studio and having to sellotape the headphones on my head when recording. The great memories of honing the songs and bringing them together with my friends, still burns brightly. The fine tuning and adjustments as we worked on them was a great feeling of coming together as a band, a unit.

We used 2 of the songs from our EP Flying High and Rock On and added Fight With The Devil and The Holy One to make our four tracks for the Roksnax album’.

Steve Dawson (Saracen): ’Right from the start of the band the other members wanted to get in the studio but I thought we should of developed our sound a bit more, let it breathe a bit, walk before we run so to speak. But we booked some time in Guardian Studios where Mythra had recorded their Death and Destiny single. The owner Terry Gavaghan proposed the Roksnax album to us where he would put us on a compilation album. It was basically a live album with some overdubs’.

Geoff Nixon (Samurai): ‘I have very fond memories of that time. We were convinced that we had an excellent line up, we felt as though we had something special. We were made so many promises by Terry Gavaghan at Guardian, we believed everything he said. He signed us to a 5 year publishing deal, as young lads we were flattered about the whole project’.

Martin Metcalf (Hollow Ground): ’It’s real music made by real musicians. You can’t replicate it with machines. Sparking off each other while recording the tracks will stay with us forever. It’s what being in a band is all about…and we loved it. We were so proud of the music that we produced, and still are! It stands the test of time and the whole album is a perfect snapshot of the vitality of the NWOBHM movement’,

Lou Taylor (Saracen): ’Now it’s not the worlds number one album but everyone involved in this album agreed that it is a wonderful feeling and something special about getting your name on a piece of vinyl. Terry was true to his word and got the album in the shops. I bought six of them straight away ha ha’.

Geoff Nixon (Samurai): ‘But we actually split just after the album, sometimes you get one shot at fulfilling a dream don’t you. Many years later I found that the album had been on sale around the world but I don’t think it ever sold in Britain. Looking back we had a lot of fun and of course we always have the album’.

Lou Taylor (Saracen): ‘Just being prominent enough to be invited to be part of something which we had no concept of how much impact on the British music scene the emerging talent in this genre actually had ! NWOBHM say what ?? Guardian Studios were (in) famous enough already due to releases from acts in the region so this opportunity seemed too good to pass up!

Martin Metcalf (Hollow Ground): ’Lars Ulrich from Metallica bought a copy of the Roksnax LP in Los Angeles and that lead to our track Fight With the Devil being played in a Metallica documentary. This was the documentary about the making of their Black Album. The scene is Lars Ulrich driving to the studio in his Porsche listening to Fight With the Devil. The film was released in 1992 and if I remember correctly we’re on the credits between Black Sabbath and Madonna! It led to me and Glenn our vocalist being invited to gigs on the Black Album tour. We had access all areas and were in the famous Snake Pit. It was brilliant’.

Lou Taylor (Saracen): ’Over a series of trips to a sleepy country village including one session which soaked up guitarist Steve’s 21st Birthday – a sacrifice of serious proportions ha! The long days and nights, the scary stories, the ghostly appearances, the owner eating sandwiches… Roksnax? The narrow deadlines, the even narrower drum booth, the raw uncertainty of the mixes (still).

But all tempered with the undeniable thrill of the coming eventuality: four guys making their dreams come true, putting their music on vinyl for the very first time and still to be heard worldwide today…priceless !

Metallica: When Heavy Metal Hit the Accelerator 6th May 2017.

Have You Heard This One ? -10 best stories from this years interviews 18th December 2017.