From his early days with The Executives, to packing out North East venues in Danceclass, recording in Germany with LiveRoom, writing TV soundtracks, and now touring with international pop star Belinda Carlisle, Dave Taggart has music in his bones…

‘I’m living in Brighton now but always a Sunderland lad, that’s where I was brought up. After I got married, we gravitated to the south coast where keyboard player Mark Taylor (Elton John, Simple Minds, Echo and the Bunnymen) landed me the job as guitarist and backing vocalist for the world-famous Belinda Carlisle.

Suffice to say I’ve toured the world and we’ve had such a great time’.

Dave on tour with Belinda Carlisle.

From a very young age music has been the life and love for Dave Taggart. But where was he first turned on ?

‘The first time I was in a Pontins Holiday camp in Morecombe. It was 1966 and we were on holiday for a week. As kids, we were left to our own devices as was the norm in those days.

My greatest pleasure was sitting at the side of the stage watching the resident band play the latest hits. I was besotted and quickly became the bands gofor. I would receive a 10 bob note and orders for five ice lollies and packets of polos.

This was of course to disguise the smell of the drink on their breath, which was a sackable offence.

After that I suppose I was hooked on music and at 11 or 12. I received my first beat up cello guitar with half the machine heads missing and an action on it like the Tyne bridge drop.

For influences I had too many to mention, John Martyn, Brinsley Schwarz then of course all the rock stuff. Lifelong friend and cohort Tony Mcananey lived in the same square as me and we would spend every summer night practising, practising, practising without any real idea.

One evening he turned round to me and said you’re the singer ok !

’From school days we were taken to local folk clubs around Sunderland where we would play a bit of Lindisfarne, Fairport Convention, Crosby, Stills & Nash, Neil Young and early Eagles stuff before they went shit.

Our mentor and driver at the time was our drama teacher Terry Deary. I wonder if teachers are allowed to do that these days.

But he just had faith in our talent. Incidentally, that influential educator of young minds would go on to receive fame and fortune himself with the Horrible Histories…true bloody story that!

By 1977 we went out to Germany just to get away from the North-East and learn our chops. We’d play the American army and Air force bases. It certainly was a baptism of fire, and we learnt a lot about the craft of performance.

But too much innovative and exciting stuff was going on back in the UK. The likes of Elvis Costello, Clash and Ian Dury were happening.

So, by early ’78 we returned to England and formed a band in Sunderland called The Executives. It immediately took off. Success spiralled into a writing frenzy and low and behold Danceclass was formed’.

A split in late ’79 saw some of The Executive members go on to play in Well, Well, Well and The Toy Dolls.

’We just gigged and gigged acquiring a massive fan base which then attracted record company interest. By 1981 we ended up on the famous A&M record label.

EMI begged us to sign with them, but we were rather green and ended up with in the end, the wrong label.

First album was recorded in Basing Street in London later to become the famous Sarm West. The producer was Mike Chapman famous for his work with Sweet and later Blondie.

We toured with various large acts of the time Sad Cafe, John Martyn and Judie Tzuke. We also performed on the famous live music show The Tube’.

The Tube was a live music show broadcast from Tyne Tees Studio’s in Newcastle, UK. The show ran for five series from November 82 – April 87 and was responsible for introducing Frankie Goes to Hollywood, relaunching the career of Tina Turner and the last ever appearance of The Jam before they split. 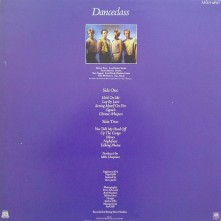 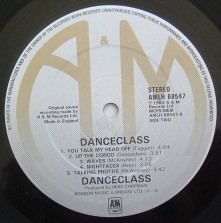 ‘But it’s the old story, we went as far as we could with that label. We got the chance to support Blondie at Wembley Arena but apparently Debbie or Chris Stein spat their dummy out and refused to come to the UK.

This was devastating news for a young band like us.

Our second record signing was to MCA records. Some interesting material was written and recorded around that time. I think at one point we had Judy Tzuke on backing vocals and a coterie of musical acts hanging around so it was an exciting time.

Unfortunately, our guy at the helm Stuart Watson, was sacked from MCA and they cleared his roster of acts. Including us. Once again, the young guys from the North-East were left floundering on the rocks.

Left to our own devices in that big London town, I turned to session music mainly singing backing vocals and ended up for some reason on a lot of UK metal albums.

There is a Dave Taggart backing vocal credit on the Destiny album by Saxon as well as albums I cant even remember singing on’.

What are your thoughts on the second album, is it just collecting dust on a shelf somewhere ?

‘Looking back on the Danceclass second album, although the material was a considerate departure from the full speed ahead power pop of its forerunner, the writing especially from Tony Mac had so much more depth and maturity.

The basic songs were beaten out at a beautiful, rented house overlooking the lake in Bowness, while next door Simple Minds were recording their tracks for the Waterfront album.

When we thought we had enough material, it was decided we should go abroad for further stimuli and the plush Wisseloord recording studios in Hilversum, Holland was chosen’.

Officialy opened in 1978 the studio was founded by electronics company Phillips and was used by international musicians such as Elton John, U2, Scorpions, Tina Turner, Def Leppard.

‘We took along Steve Brown (producer ABC, George Michael, Wham! Alison Moyet, Freddie Mercury, The Alarm, The Cult, Manic Street Preachers, The Pogues) and we had Richard Cottell on keyboards.

It wasn’t easy recording the album as some of the songs changed dramatically as they grew and some just remained as a basic ‘rock out’ vibe. Suffice to say an album that we were proud of didn’t make it for release.

We got compensation, but when you’re in your early to mid 20s with a passion for your music, it hurts.

All water under the bridge now so, yes, that album will be collecting dust somewhere in a vault and all I have left are some well-produced demos on quarter inch tape and a cassette of the album’.

What was your next move ?

‘By the 1990’s I had returned to Sunderland and started writing more songs with Tony Mac who had got a job writing the music for Jimmy Nails BBC Spender series.

While all this was happening our old Danceclass manager got us a deal with a new fledgling German label who loved the material. We went out to Frankfurt to record the LiveRoom album.

Moderate success followed and loving the creative environment, I stayed in Germany writing for TV and film while Tony returned to the North-East to mix the Spender soundtrack.

These were real fun times as Tony wrote the music for the album with Jimmy Nail and we all ended up performing on it. Then of course touring it.

After the Top of the Pops performances and tours I took time out to travel with my guitar to the Middle East and Europe before landing a job writing some of the incidental music for the BBC production Our Friends in the North. 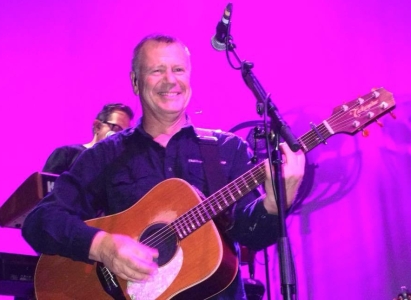 Finally, what does music mean to you ?

‘Everything. Even more so as I get older. I might not like some of the crap pumped out, but I appreciate the time put in and how they got there.

I’ve always had an all-embracing love of different genres and that’s down to parental and sibling influence.

Lying on my back as a toddler in our council house listening to Swan Lake, Ella Fitzgerald or the Fab Four. My brother taking me to the Sunderland Empire at the tender age of 12 to see Sonny Terry, Brownie McGee, Bukka White.

Or a year later the Newcastle City Hall to see the now legendary Rolling Stones concert where Jagger introduced the crowd to his new wife Bianca – while Bowie clapped in the wings.

Fashions and fads fall along the wayside as your journey progresses and all you’re left with is the thing that really matters. The music’.