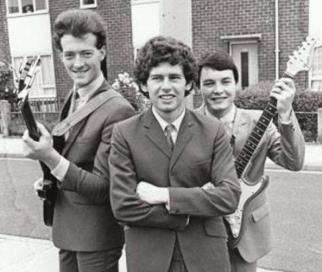 Who were your influences and was there a defining moment when you said “I want to do that” ? ‘I was listening to Jeff Beck and Wishbone Ash. I remember watching Mick Ronson and Bowie on Top of the Pops playing Starman..well that was it… game over!’

When did you start playing gigs and what venues did you play ? ‘At 15 years old I started playing the pubs and clubs of the North East. When I joined The Videos we went professional and played all over Europe supporting bands like Bucks Fizz, Racey, Madness, The Specials, Selector, Bad Manners all that Two Tone stuff and a bit of pop. Loved it. Was also in a band called The Jogging Waiters !’

What were your experiences of recording ? ’We recorded in Guardian Studio in Durham. We done Deo, Him or Me and Blitzo Calypso. We also recorded some demo’s for Miles Copeland manager of The Police. That was at Strawberry Studios. The line up for The Videos was Ged Duffy on bass. Johnny Newsome on drums and myself on guitar. We all handled vocals with Ged the lead’.

Did you record any TV appearences or film any music videos ? ’Around 1979 we were on Border TV where we played Deo. Also the Tyne Tees TV programme Northern Life. That came about because we had a manager Dave Connors from Middlesbrough who knew a couple of TV people, and somehow he got us on twice for our singles Deo and Blitzo Calypso – that led to our tour with Bucks Fizz. The Videos lasted until 82’.

(Check them out on You Tube at The Videos Ska/White reggae pop band).

Have you any stories from playing gigs ? ‘Well on stage there was a few electrocutions ! There was a time in Guardian Studio when John Miles got the tea on for us. We met David Bowie at Julies nightclub in Newcastle, I remember he fancied my mate. Once we were playing at a club in Newcastle and a flash bomb went off prematurely, just as a woman passed by with a tray of drinks – it set fire to her nylon dress’.

What are you doing now and are you still involved with music ?  ‘I run The Foxhead Cowboy home recording studio and just produced a few tracks for local musicians Mark Simpson and another for Jonathan Honour. They are on Spotify and Apple music. I got two of my own songs Pallister Park and The Foxhead Cowboys through to the semi final of a UK songwriting competition. They can both be heard along with tons of my other songs on Soundcloud under Mac the Geetar.

I’m also playing in a band with Spike -ex Chris Rea band. Doing some Tom Petty, Ry Cooder, Taj Mahal, Drive by Truckers and Ron Sexsmith. We have Steve Conway on vocals, Gary Cain drums, Bob Garrington on guitar, Martin Poole on bass and yours truly on guitar and vocals. Also playing in pubs with The Rivals. Doing some power pop, 70’s and 80’s stuff plus some up to date tunes’.

Interview by Gary Alikivi May 2018.