Gaurdian Sound Studio’s were based in a small village called Pity Me in County Durham, North East UK. ‘Pity Me’ features later in this story by Steve Thompson, songwriter and ex producer at NEAT records.

There are various theories on the origin of the unusual name of the village – a desolate area, exposed and difficult to cultivate or a place where monks sang ‘Pity me o God’ as they were chased by the Vikings. Whatever is behind the name it was what happened in two terraced houses over 30 years ago that is the focus of this blog. They were home to a well known recording studio.

From 1978 some of the bands who recorded in Guardian were: Neon, Deep Freeze and Mike Mason & the Little People. A year later The Pirahna Brothers recorded a 7”. 1979 saw an E.P from Mythra and releases in 1980 from Hollow Ground, Hellanbach and a compilation album, Roksnax.

From 1982 to 85 bands including Red Alert, Toy Dolls, Prefab Sprout, Satan, Battleaxe and Spartan Warrior had made singles or albums. I caught up with a number of musicians who have memories of recording in Guardian… 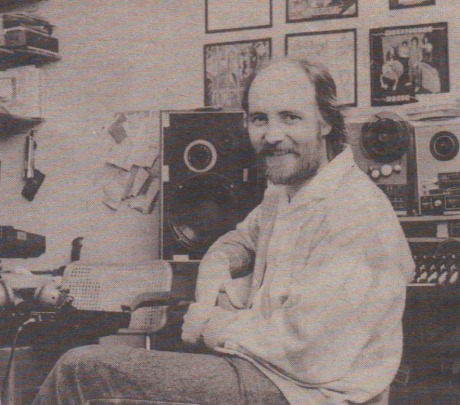 STEVE THOMPSON: (Songwriter) ‘I had quit as house producer at Neat Records in 1981. I had begun to realise that I was helping other people build careers whilst mine was on hold. I was becoming bogged down in Heavy Metal and whilst there’s no doubt I’m a bit of a rocker, I really wanted to pursue the path of a songwriter first and foremost.

Production might come into it somewhere along the line but I wanted that to be a sideline, not my main gig. So I set about composing the song that is the subject of this story, ‘Please Don’t Sympathise’. This is what happened.

I had just cut a single with The Hollies. Bruce Welch of The Shadows was in the production seat for that recording in Odyssey Studios, London. I signed a publishing deal with Bruce and remember signing the contract at Tyne Tees TV Studios in Newcastle, Hank Marvin was witness. Bruce had heard an 8 song demo of my songs and selected 4 favourites from it.

He asked me to make some more advanced demos of those 4. I could have gone into Neat/Impulse Studio but I still wanted to carve new territory so I went to Guardian Studios in Pity Me, County Durham.

I played bass, keyboards and guitar on the session with Paul Smith on drums and I brought my old mate Dave Black in to do vocals. I spent two full days on those demos, Bruce Welch was paying and he really wanted me to go to town on the production. Then a producer called Chris Neil entered the story.

Chris had worked with Leo Sayer, Gerry Rafferty, A-Ha, Rod Stewart, Cher and others. Chris and I had just had a massive hit with his production of my song Hurry Home. Chris was by now having a bit of a love affair with my material. Chris had asked Bruce to give him first dibs on any of my new songs that came along.

He picked up on two from the four songs I’d just demoed in Guardian. One of them he sang himself under the band name Favoured Nations. But the recording pertinent to this story is his production of Sheena Easton’s new album Madness, Money and Music.

He recorded my song Please Don’t Sympathise for that album. The album did very well. It went top 20 in the UK, peaking at 13. It also charted in several other countries and did particularly well in Japan’.

‘About a year later Celine Dion also recorded the song in French ‘Ne Me Plaignez Pas’. It was a huge hit single in Canada and certified Gold status. The album it was featured on sold 400,000 copies in Canada and 700,000 copies in France. I never did go back to Guardian but that is a lot of action from just one demo session. Interestingly, the literal translation of Ne Me Plaignez Pas is Please Don’t PITY ME ! Spooky huh?’

‘These days I’m doing this song and many others that I wrote for various artists with my own band. I’ve uploaded a video collage here https://vimeo.com/266141205. It starts with the Guardian demo with Dave Black singing. The demo doesn’t sound that sophisticated after 37 years but that’s where it started. Then there are clips of the Sheena and Celine versions and then my band doing it live.

Sadly Dave Black is no longer around to sing the song as he did on the demo but Terry Slesser does a fine job of it. Jen Normandale comes in on the bridge in French ala Celine!’  www.steve-thompson.org.uk

This needs to be confirmed by a visit down to Pity Me, but  a quick search of 26-28 Front Street on google maps reveals a well known supermarket where the two terraced houses were. I wonder if customers buying their tins of beans and bananas know the rich musical history that Gaurdian Studios contributed to recording in the North East.

The Tap & Spile is just next door, was that the pub where many of the bands went for refreshment ? If anyone has information or recorded in Guardian studios it’ll be much appreciated if can you get in touch.