‘Who shall have a fishy on a little dishy. Who shall have a fishy when the boat comes in’….lyrics to the opening tune from the TV series ‘When the Boat Comes In’ which first broadcast in January ’76. Hearing the song it had a whiff of a twee sunday afternoon show playing straight after The Big Match and before Little House on the Prairie. I never saw it when it first hit our TV screens, was too busy watching The Sweeney. But after catching it a few years ago the little twee telly show was actually a hard hitting drama. It deals with the reality of a soldier (Jack Ford played by James Bolam) returning from the 1st World War and his struggles with poverty and politics in the fictional town of Gallowshield in the North East of England. The first episode ‘A Land fit for Heroes and Idiots’ set’s the tone… ‘In series one there were 13 scripts in which my dad wrote 7. His creation, his characters, with other writers during the series. I was 16 and first watched it with my mother. That first episode was quality drama. My mother turned to me and said ‘You better go and ring your dad because he’s just done something remarkable’. The programme was created by South Shields born James Mitchell and now his son Peter is adapting the show for theatre…’The play is based on series one and begins with Jack returning from the war where he meets the Seaton family, Jessie and Billy trying to get him involved in politics, he falls in love with Jessie and the problems he gets into when dealing with industrial strikes’.

Is there anybody out there today in business, political or celebrity world that you could compare to Jack Ford ?  ‘Do you know nobody has asked me that before. (Slight hesitation)….Well I’m not sure I should say this but…. I would say Donald Trump. (Both laugh)…Because love him or hate him. Trump can hold an audience. Massive ambition. Massive selfishness. What other people might call focus. Great desire for more to the extent of not really caring about the consequences. A winner, an influencer, a persuader. I would say there’s a little bit of Jack inside Donald Trump’.

Does the play reveal more about Jack ?  ‘He served all the way through the war and became staff seargant but still didn’t have enough so signed up again. He joins the North Russia Expidicary Force where he goes to Murmansk and does an extra year. It tells you a lot about Jack. He’s alone the minute he comes back. All the friends he’s got are the one’s he made in the army. This is a man who has found a family in war and really the only thing he is good at, is war. He interacts with mates, union men, the upper crusts, politicians, a full spectrum of society. He has learnt to fit in with any group but I don’t think he knows where he belongs. All he knows is how to survive in any given circumstance. He see’s a chance and takes the opportunity. You know it’s live for today and tomorrow you might die which is something you learn when you are in the trenches for four years’.

The TV show aired on BBC1 and at it’s peak reached audiences of 15 million, with all 4 series available on DVD. Do the actors realise the enormity of what they are taking on ? ‘The cast are great, they are all young, as were the soldiers coming back from war. What is impressive is the energy and passion that they are bringing. We had research and development, a read through, started rehearsals and in them I have seen new things brought to the play helped with Katy’s vision as director. This is all Tyneside people, I’ve been massivly impressed. There’s a great team working their socks off down there and that makes me feel good on behalf of my dad. There will be a lot of people like you who have seen it on TV or DVD and there will be an element of expectation. But I want to go on a slightly new journey in the way it’s delivered. What’s been lovely for me was working with Katy Weir the Director because I’ve seen some of her work before and really enjoyed it. When we met I was very impressed with some of her ideas and I was very keen to have a woman direct because a woman has never directed When the Boat Comes In. In the 70’s when it was made there were no female directors in television and the series is full of very powerfull women characters’. 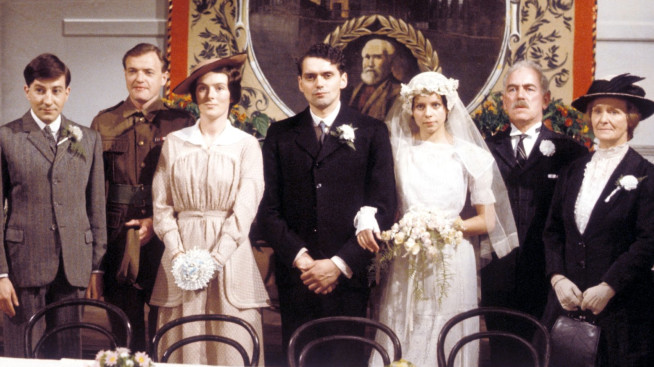 The Seaton family with Jack in uniform.

I can confirm that. Some of the stand out performances of the TV show are with women holding court. Just check the performances from Jean Haywood playing Bella Seton, her daughter Jessie played by Susan Jameson and Rosalind Bailey who plays Sarah Headley. The writing and performances never drop pace. In season 4 episode 2 contains an outstanding scene with Sarah and Jack where she tells him her husband and his best mate Matt has died….’Yes I love her character, Rosalind is a great actress. Excellent on the show. It’s been really interesting to revisit again and work out the characters with the same basic arc of the story but transform it onto the stage. Mechanics of stage are different to what I’ve been used to as my background is in journalism and television’.

How did you get interested in writing and eventually working in TV? ‘Well I’m a Shields lad who went to the Grammer school. Unfortunately my parents divorced in 1966 so I was travelling down to London on weekends to see my dad who was a published author by then. My mam Norma was a school teacher in Shields and looked after me and my brother Simon. She never re-married, it was her and her boys you know. My mam was a wonderful, devoted woman and a natural born teacher. Plus a great actress. She performed at The Peoples Theatre in Newcastle, also at the Westovians and met my father at Cleadon Village Amaetur dramatic club. They both had a love of the arts so there was a bit of showbiz in my life from when I was young. But I was really interested in journalism so after University I got a job at a weekly newspaper in Chesire, then an evening paper in Carlisle. A few years later I was in London freelancing for national papers and researching for London Weekend Television. Then I saw an advert for a researcher at Tyne Tees TV, applied and got it. Great times there and worked on screen drama, mostly documentary then promoted to Director of programmes until I left in 1997. Then I was at Zenith North where programmes like Byker Grove and Dale’s Diarys were made – loved working on that. Then had my own production company and done a bit of media consultancy work. My career path has always been about screen work so theatre is a new challenge finding out how it all works’.

During the TV series some scenes were shot outside The Customs House in South Shields and that’s where the play is being performed…’Yes it’s come home in many ways, very pleased about that. Ray Spencer (Director at Customs House) and I talked about the possibility 4 years ago and I was going to write a treatment for it. Then a London based production company were interested in buying the rights. While we were negotiating with them we couldn’t go forward with the theatre side. They took out an option with a time limit but never did anything with it, never commisioned any scripts. So when the time expired I rang Ray back up and said how about we look at it again. The timing feels right, it’s 100 years after the war. He said great let’s do it’.

‘When the Boat Comes In’ is on from Thursday 16th – Saturday 25th August for tickets contact   https://www.customshouse.co.uk/theatre/when-the-boat-comes-in/