How important are the arts in the North East ? ’Times have changed and opportunities in the Arts seem to have become more limited. The traditional route for actors, via drama school, now favours only those whose families can afford the expense of London based education. As a result, far less working class actors are breaking through.

Funding for theatre in education is almost non existent and schools are encouraged to undervalue drama and music in the mainstream. Sad times in my opinion as young people need access to the arts just as much as they need access to health and fitness. Without an outlet for our creativity, we stifle our imaginations and become frustrated robots’.

How did you get interested in music ? ‘The first year of my life, 1963, was spent in Gateshead but I always regard myself as a ‘Jarra lad’ because the next 17 formative years were spent in Jarrow. I was surrounded by music. My dad who had served his time at Reyrolles and become a Pattern Maker (similar to a Draughtsman), was an accomplished singer, composer and musician.

During my early childhood, I would often wake to hear him return from night shift and start playing guitar, singing softly, sometimes Vincent by Donovan or one of his own compositions. It may seem odd, but I looked forward to being woken in the middle of the night to hear this comforting sound. I don’t even know if he realised that I could hear him.

My dad was restless and would soon leave his secure and reasonably well paid job at Reyrolles and take the risky step of turning professional, performing in a thriving North East, working men’s club scene. The culture of most catholic families in Jarrow was for children to perform musical party pieces at social gatherings. My younger brother, Anthony, and I would sing songs my dad had written at such events, often performing the wrong lyrics accidentally.

I recall one occasion with everyone stifling their laughter in an attempt to protect our feelings when we sang the wrong word; instead of ‘parting’, we sang ‘farting’. We were only 5 or 6 years old. So my first and major musical influence was and still is, my dad, Michael’.

Who were you listening to ? ‘As a kid, there were remnants of the 40’s and 50’s hanging around like the Inkspots who were sentimental but tongue in cheek at the same time. I still like to listen to them. Moving from the 50’s to 60’s, lots of rock ‘n roll, particularly Elvis, Buddy Holly, Eddy Cochrane and Roy Orbison. The Beatles were brilliant, particularly John Lennon.

I also felt a buzz listening to Hendrix, Free and The Doors. The 70’s were such a clash of styles. There was all that funk from the States, The Jacksons fronted by the remarkably talented Michael Jackson, the squeaky clean, coiffured Osmond’s, the second manufactured boy band (after the Monkees), the Bay City Rollers etc.

Prog rock and YES with Rick Wakeman on keys, first experienced on the Old Grey Whistle Test on BBC2 blew me away. In the mid 70’s I heard Steely Dan for the first time and loved the albums, Can’t Buy a Thrill and the Royal Scam. Then there was Bowie!! I loved everything he did’.

When did you play your first gigs ? ‘My first instrument was piano. I started lessons at the age of 6. I really wanted to be a drummer but my brother got the kit as he didn’t like piano lessons. Ironically, he still ended up a better keyboard player than me! I play guitar and bass too but rarely these days. When I was 17, I formed a band with my best mate at school, Dave Morton called Private Collection. We played school concerts and anywhere that would have us. Good times.

Between the age 10-18, I played the clubs with my dad and brother in Mike Mason and the Little People. You might wonder why the surname changed from McNally in the stage name. Well, we toured Scotland every summer and played a lot of ‘Orange’ clubs. My dad had been advised by an agent, years before, to play safe with a name that wouldn’t arouse suspicions about our Irish heritage. We toured as a headline act at the same time as Cannon and Ball, The Krankies and Little and Large haha!

1977 and the Sex Pistols changed everything. Popular music was being punched full in the face. Bands like the Clash, Undertones and Buzzcocks hugely impacted on young people, encouraging them to pick up an instrument and thrash it loud and hard with attitude. Although I was performing what could be described as ‘cabaret’, this music and the emotion behind it really appealed to me. I think I found a lot of the mainstream music unctuous and superficial. Punk meant revolution and it was exciting!’

Who are you listening to now ?  ’I have continued to have an eclectic taste in music. I love classical music when I am chilling, jazz sometimes when I am travelling and hearing some of my son, Luc McNally’s Scottish Folk music. I like the Killers, Arctic Monkeys and Vampire Weekend (introduced to me by my daughter Ellen).

Michael with Bob Smeaton on set of the 1983 film ‘Accounts’.

How did you get into acting ? ‘I left the family show at 18 to study. I started a Law degree in Newcastle. My plan was to be a solicitor but play in a band at the same time. Having successfully completed my first year in 1983, I auditioned and was cast in a leading role for a Film on Four called Accounts, written by Michael Wilcox. Bob Smeaton and I played brothers in this beautifully written piece set in the Scottish Borders.

Bob has achieved some remarkable things in his career including Emmy awards for producing music documentaries. I took a sabbatical for a year to make the film but never returned to my studies. Once the film was shown and well received, I was offered representation by London agents. I made a huge decision and moved to the Capital’. 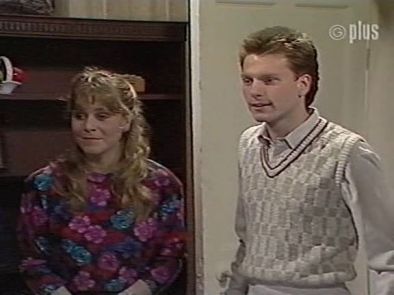 ‘I managed to survive a steep learning curve and found work in television and theatre. My first repertory experience was as the narrator in a musical version of The Piper of Hamelin at Liverpool Playhouse. Next was Andy Capp at Newcastle Playhouse in ’85, and work at Royal Court and Royal Shakespeare Company. As soon as I finished a job there were always opportunities for the next.

Whilst playing Jacky Milburn in ‘Wor Jacky‘ at Newcastle Playhouse in 1989, I was invited to Tyne Tees TV to discuss a series which required a presenter. As a result, I got my first presenting job in a show called McNally. I made 13 programmes and had a fantastic time being paid to do what I enjoyed most, meeting interesting people and having adventures’.

What does music mean to you ? ‘Music is an escape, a freedom from whatever ties us down. It can be the medicine we require to soothe or the motivation to move. Without it we are monotone, bland and sad’.

What are you up to now ? ’Musically, I am playing keyboards in local band, The Moobs! We have a large following in the region and play songs that get crowds excited and on their feet. Watch out for ‘The Running Show‘, which I will be presenting with Tony ‘The Fridge’ and others, coming soon!’

On stage with The Moobs.