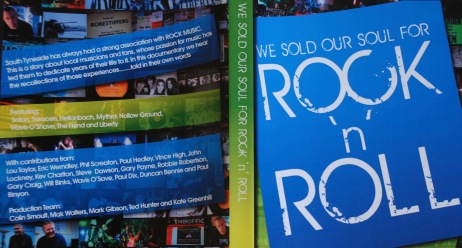 In February 2017 I transcribed interviews from the documentary and decided to put them out on a blog. I added some new interviews and updated the originals. Then more musicians got in touch. The blog has snowballed from North East bands like Beckett to worldwide musicians like John Dalton in California. To date it has reached nearly 40,000 views.

But how did I tackle this documentary and pull it all together ? Firstly I talked to a few musicians who passed over some of their archive of demo tapes, video’s and photo’s. Plus I already had a number of photographs I had taken through the ’90s.

Then a lot of research was done in the Local Studies Library, South Shields. I remember during the ’80s reading a feature called Young Weekender in the Saturday edition of local newspaper The Shields Gazette. It featured interviews, releases by local and national bands, plus a list of gig dates around Tyneside. The library had all the Gazette’s on microfilm. It took a few visits but in all it was a good start.

Then during May 2007 filmed interviews were arranged at The Cave in South Shields, formerly Tyne Dock Youth Club, where in the 1970’s some of the bands had rehearsed and performed as teenagers.

I was surprised at the amount of people who turned up to tell their story, and what excellent stories they were. The title of the documentary is from a Black Sabbath compilation album and perfectly sums up the feeling I got when people were telling their story. Some bands even got back together after 30 odd year. After working on a few other projects, finally in 2010 a 30 minute version of the documentary was screened in South Shields, it was shown a few month later at The Cluny in Newcastle along with a film about the New York Dolls. In September 2011 a full version was shown at the Library Theatre in South Shields.

‘We Sold Our Soul for Rock n Roll’ is on the Alikivi You Tube channel. To check out other films why not subscribe to the channel.