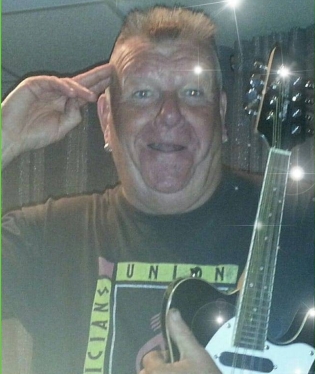 What bands did you see when you were younger ? ‘Used to go to the Newcastle Mayfair on Tuesdays that was for local and up and coming bands. Friday nights was big bands like Deep Purple, T.Rex, Strawbs that’s where I fell in love with Sonja Kristina from Curved Air. Also saw Rory Gallagher there. That’s when I met him.

My uncle was a baker and he had a young lad working for him and to subsidise his apprentice wages he worked as a doorman at The Mayfair. Well one night Taste were on and the young lad who worked at my uncles bakers was working that night. He let us in the dressing room and there was Gallagher at the table full of dark drinks, rum or sherry who knows and the drummer was hitting the wall with his sticks.

I said ‘Great to meet you Rory’ shaking his hand. ‘What did you get your haircut for ?’ He said ‘It gets in my soup’ haha. But it was sad that time when I was flying back from holiday and the paper just said ‘Rock Star Dies’. That was it you know. Aww he was a great player’.

Can you remember your first guitar ? ‘Aye it was a cricket bat with a fishing line on. I never used to do anything right at school. I went away youth hosteling and the teacher taught me how to play the guitar. It was the first time I was praised ‘Well done Alan’ instead of ‘Knights you can’t do that’ you know. Music put me on the right rail.

I started work at the Ministry in Longbenton in ’68. We used to sort out pension books, family allowance, national insurance things like that. It was a big complex. A lot of musicians and bands worked there, you had Alan Hull from Lindisfarne and members of Raw Spirit. Dave Black worked there. He went to London and had an album with his band Kestrel it was called The Acrobat. Great stuff prog music you know, fantastic.

But at work I’d go round telling everybody I played guitar. This kid sold us a beat up acoustic which only had four strings on it and that’s how I learnt to play bass. All self taught. I have a few guitars now but my pride and joy is my Rickenbacker 1973 Fireglow. I paid £275 quid for it, it’s got a bit buckle rash on the back but it’s worth a bit more now’.

When were your first gigs and what venues did you play ? ‘In the early days I was nervous as anything playing pubs and folk gigs. Once was playing the mandolin in this folk club and couldn’t feel the plec in my fingers. So nervous.

But I loved the folky thing starting out in Washington. But when the miners strike happened we couldn’t play the pit places so we reconstructed our set for the pubs. A bit of Irish and pop stuff that worked really well. That was with Beggars Bog. The name is from a farm up Corbridge and Hexham way’.

Have you recorded any of your music ? ‘I was playing solo and heard that fellow North East musician Derek Miller was doing backing tracks. We met up and I felt as if I’d known him all my life. So we put a duo together and went out as El Vivo, recorded a few albums and done a lot of stuff on the radio where presenter Paddy McDee was a great supporter of ours.

Then a few more musicians got together and we ended up a 5 piece. We wrote a lot of original stuff with harmonies, synth and a few traditional songs. I went to the studio one day and they had something playing I said I can see ships you know and started singing  ‘Here’s A Tender Coming’. They said what’s that ? It’s an old folk song from South Shields. So we added a middle 8, few harmonies and my daughter played a clarinet on it.

We had a song called The Man that Saved the Day it got a lot of radio play. It’s about a guy I worked with on a ship that caught fire at Swan Hunters shipyard. As a young ‘un I was a plumbers mate and thankfully got off the ship in time. The guy who the song is about got a lot of lads out of the engine room’.

Have you any stories from your time gigging ? ’In the ’80s we put a band together called Beggars Bog with Davey Hiles on guitar, Davey Hutchinson on guitar, me on my Rickenbacker bass which I’ve still got.

We done this documentary something to do with Nissan and Frank Wappat on the radio. His recording studio was in a church in North Shields. So there was  four of us in the pulpit with cans of McEwans export. We done the show and at the end of it he said it’s a bit late to go for a pint now I’ll take you to my private bar which was called the Bunker. I‘m a tall lad so I thought it would be a low ceiling sort of place but it wasn’t. It was a room all about the Germans during the war with these orange lights on and listening to Hits from the Blitz. We looked at each other and said this ain’t for us haha.

We ended up on the telly a show called Bog on the Tyne, on Northern Life presented by Paul Frost. But that band folded and I ended up in the Dynamite Twins. We all had club names – I was Kurt Fontaine, we had Tristram St Clair, Jason Saint Maritz and we had the names stuck on our mic stands. We couldn’t do it for laughing’.

What’s the pub and club scene like now ? ‘Well you got people going out for buttons you know, the Ed Sheeran types. They are keen. But it’s the money thing, if you can get the bass down on a backing track, the drums that’s two people they’re not paying for.  We just got back from Corfu and a lot of the acts just have a laptop. Never saw one guitar.

But I love working live. Played at a Buskers Night with a fantastic drummer Mick Nevins and former Fist guitarist Keith Satchfield we’re called The Labour Exchange. I’ve also teamed up with a guy called Leonard Brown he was in The Happy Cats. He’s only 26 year old, an accordian player. For a young lad he has a wise head on his shoulders. Great technician and a pleasure to work with. We’re called The Ferry Hillbillies, I get the Bouzouki out for that one.

We have a few gigs lined up, one at the Allendale Folk Festival. I also run a few buskers nights with a lad called Dave Moffat, great lad, been on the circuit for years, he’s got no hair now haha. Open mic nights are also a great way to bring new blood through. Cos if you don’t look after the young un’s you’ve got no future. Some great young one’s coming through’.

Can you pinpoint why in the past few year, Tyneside has had a number of entertainers, singers and comedians who have broke through to the mainstream ? ‘You can go back to Gerry Monroe he was a Shields lad on Opportunity Knocks. Then Splinter with Costafine Town and Bryan Ferry. Then you had Terry Slesser and Davey Ditchburn both with various bands who had been there or there about you know. There was Dave Black and his band were on Top of the Pops. Looking back Tyneside has always had a strong entertainment background’.

What does music mean to you and what has it given you ? ‘Howay man, what does music mean to me ? It’s the food of life man. If I don’t have any musical intake for about two days I’m like a bear with a sore head. If it’s not driving around dropping posters off, promoting the gig, if it’s not actually being up there and doing it, maybe sitting in behind somebody, putting a few harmonies on in a studio.

It’s all I talk about just ask wor lass haha. Music has given me a good lifestyle, a hell of a lot of pleasure, satisfaction. And a big family, the friendship of musicians in the North East is second to none, we always look after each other like’.

Why not check the ALIKIVI You Tube channel for more North East stories.