Gaurdian Sound Studio’s were based in a small village called Pity Me in County Durham, North East UK. There are various theories on the origin of the unusual name of the village – a desolate area, exposed and difficult to cultivate or a place where monks sang ‘Pity me o God’ as they were chased by the Vikings.

Whatever is behind the name it was what happened in two terraced houses over 30 years ago that is the focus of this blog. They were home to a well known recording studio.

From 1978 some of the bands who recorded in Guardian were: Neon, Deep Freeze and Mike Mason & the Little People. A year later The Pirahna Brothers recorded a 7”. 1979 saw an E.P from Mythra and releases in 1980 from Hollow Ground, Hellanbach and a compilation album, Roksnax.

From 1982 to 85 bands including Red Alert, Toy Dolls, Prefab Sprout, Satan, Battleaxe and Spartan Warrior had made singles or albums. I caught up with a number of musicians who have memories of recording in Guardian… 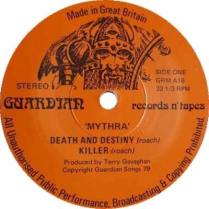 JOHN ROACH (guitar): ‘With Mythra we saved some cash from our gig money with the intention of recording a demo tape to see if we could get any interest from record companies. We checked out Impulse and Guardian studios and decided to go with Guardian. From what I remember we were offered actual vinyl records for our demos, rather than cassette tapes’.

MAURICE BATES (bass):  ‘The first recording session was a new experience and opened our eyes to another part of being in a band. The owner Terry Gavaghan was more of an engineer than producer, he just said to us no slow songs lads keep it up this is good !

JOHN ROACH: ‘Guardian Studios was in a very small terraced house in Durham. If you entered from the front street you ended up in the main recording room, with a very small isolation room for the drums. Through a door you entered the control room which was actually the back of the house. Terry Gavaghan lived next door. He kept disappearing during the recording, going for something to eat or answer the phone to the big record companies!

MAURICE BATES: ‘We slept upstairs to the studio so we could get on with recording straight away in the morning. But as we were recording our own bit separately, everyone else had to leave the studio so we ended up in the pub! Happy days’.

JOHN ROACH: ‘We released the vinyl EP in November 1979. It is well documented that this was one of the very first records to be released of what would become known as the New Wave of British Heavy Metal’. 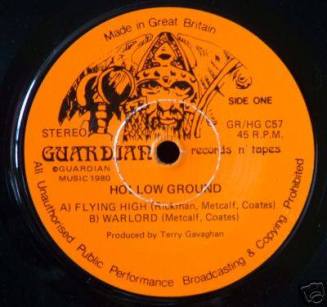 JOHN LOCKNEY (drums): ‘Because we had our own material we were trying to get the money together to get in the studio and record it. It was so nerve wracking then cos we were green as grass. Doing overdubs and things something we had never done before’.

MARTIN METCALF (guitar): ‘One night we went to a Raven gig at Newcastle Mayfair and Steve Thompson who was producing at NEAT studios then, pulled me to one side and said there’s a deal at NEAT if you want. I liked the idea but told him we had just sorted something out with Guardian. We went down to the studio in Durham and recorded 4 tracks. It cost around £500’.

JOHN LOCKNEY: ‘It really was great. I mean you’ve been brought up and bought singles. Now suddenly you’ve got one of your own. We were proud of the songs. We think they still stand up today and we went round selling them to local record shops. It’s still one of the proudest things I’ve ever done you know’.

MARTIN METCALF: ’I still remember the smell of the brown cork tiles in the studio and having to sellotape the headphones on my head when recording as they kept falling off ! In hindsight maybe NEAT would have turned out better for us in the long run’.

JOHN LOCKNEY: ‘We went back to record another 2 for a compilation album Roksnax. The production and the way we played was better then. We weren’t as green and went back again and done another 4 tracks for demos to flog around record companies. You can tell the difference how confident we were with more experience in the studio’.

STEVE DAWSON (guitar): ‘We went into Guardian Studios where our friends, Mythra, had recorded their Death and Destiny EP. Most of us were friends from school or through the scene, you know, being thrown together in this cauldron of New Wave of British Heavy Metal. We booked a day there and recorded 3 songs’.

LOU TAYLOR (vocals): ‘I saw it as moving up to the next level and felt excited to be in the studio and something happening for Saracen. When we went down to the studio we first drove past the place and double backed on ourselves to find it. It looked just like an ordinary house, later we found it was two terraced houses knocked into one’.

STEVE DAWSON: ‘After the initial recording session, we were invited to attend a meeting with the owner Terry Gavaghan who proposed an idea to us about putting our tracks on a compilation album. It was going to feature local bands Saracen, Samurai and Hollow Ground. So we decided yeah let’s go for it’.

LOU TAYLOR: ‘I can’t remember much from the sessions apart from recording my vocals quite late at night and the drum booth being tiny. When Dave was behind the drums we had to pass him refreshments every so often as it was such a tight squeeze to get in. Terry was forever nipping out of the studio and coming back with a smelly cheese sandwich or something to eat, and he loved to talk about the resident ghost !

STEVE DAWSON: ‘The album was basically a ‘live’ performance in the studio with minimal overdubs. I spent my 21st birthday in that place…I’ll never get it back!’

LOU TAYLOR: ‘On reflection we might have been better off recording at NEAT, as they were more loud and proud, you know the whole crash, bang and don’t forget the wallop’.

If anyone has information or recorded in Guardian studios it’ll be much appreciated if can you get in touch.