Steve Straughan guitarist with UK Subs got in touch about an ongoing problem of instruments damaged by airlines. An issue that he feels all touring musicians should be aware off…

In 2015 the headstock on my Gibson Les Paul Classic was smashed off while in a hard, solid flight case. The guitar was actually in two pieces. This was the second time it had happened on two different airlines. This was when I decided to take action. 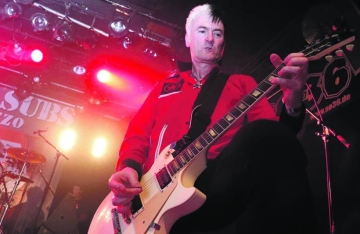 I took to social media and loads of people replied offering good advice. I got in touch with Air France and at first they told me they would not compensate me. Their reason being that the guitar case was not damaged but the guitar was. So I sent an email directly to the CEO of the airline and I started receiving offers of compensation from their staff. Eventually I was compensated but it took a long time.

But this was only due to all the good people out there. All the messages of support really helped. It felt like I wasn’t going through the whole process alone. This is why I set up a facebook page to help others who find themselves in the same unfortunate position. We can take on the big companies if we stick together.

What do you think is the main problem in transporting your instruments ? On top of the lack of storage issue there is the on-going problem of the instruments being smashed by the baggage handlers and left in the airport or even sent to the wrong airport. It’s also a hard fight to get any compensation for damaged instruments. It’s becoming very difficult for musicians.

Airlines have lost my guitar twice. There was one concert in Budapest and another in Spain where I had to use another musician’s guitar. I often get messages saying it’s happened to them.

Is this being addressed by the airlines and can you see it becoming a bigger problem ? More airlines now are refusing to take guitars on board planes and store them in the overhead lockers, or any other lockers. Some airlines are now even stating that you must give them advance warning for guitars to be stored even in the hold. It’s a big ongoing problem.

What do you think is the future for musicians who use airlines ? I’m starting to think that it’s gonna have to be down to promoters to supply guitars and other instruments. A lot of musicians find it hard using guitars other than their own because most have them set up to the way they like them. The sound can also be quite different. The unfortunate thing is I see no other way.

If you are a touring musician that uses flights and your instrument has suffered damage or has been lost by an airline please share your story. I’m trying to get musicians from all over the world to act on this and voice their outrage and concerns. The more the better. All of our voices could possibly help you get justice. It worked for me. Nothing is required apart from our anger, frustration and voices.