What projects are you working on ?

I’m in the studio writing and arranging with musician Cortney Dixon. Cortney is like a creative soul mate we have a lot in common the way we work. She is also working with a writer called Jim Lowe – Grammy award winning producer whose worked loads with bands like Stereophonics and the Charlatans.

So the songwriting is really coming on and she plans on releasing something this year. I also play keys for her live. 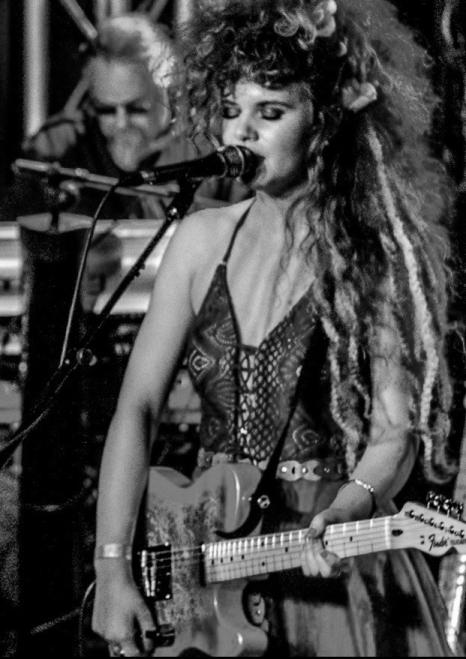 On stage with John and Cortney Dixon.

It’s really interesting stuff as Cortney is not interested in pop or the girly image. She’s interested in making an album with two sides, the cover, the whole product you know. Really old school. I’m enjoying that stuff.

She has management who benefit her with contacts and wisdom as they’ve been around a long time.

A couple of year ago when I was engineer at The Customs Space Studio in South Shields I was working with Martin Francis Trollope who is engineer there now, Cortney and Jade Thirlwell who went on to be in Little Mix. Obviously, Jade went through the whole TV route while Cortney went opposite to that but they are both talented and great singers.

It’ll be interesting to see where Jade goes after Little Mix and the crazy pop world that she is in. Cortney has been offered that route, she met the Cowells and all of them you know but she didn’t want that. I’m proud that she’s took her own path. Quite a punk ethic really. 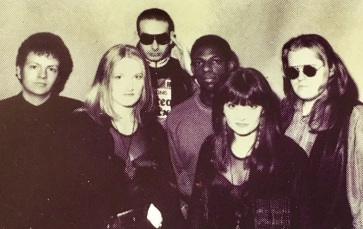 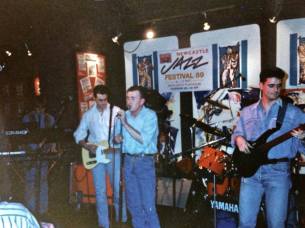 What is your background in music ?

I was in a few bands in the ’80s and ’90s. One was 3 Kicks a Newcastle based funk/pop sort of band then The Ghosts of Soul. For that band we done our songwriting, gig’s and video all funded by playing the workingmen’s clubs.

We would have a different name doing the covers, make some money then put it all back in and do some recording. I remember how hungry we were. We would of done anything to make enough money.

We were at college when Ghosts of Soul were about so we had a grant but that wasn’t enough. We could use the studio gear at college which was great but to be a travelling, touring musician can be expensive.

Were you making a living as a full time musician…..

I don’t think you can make a career out of it you’ve got to be lucky to play more than a couple of gigs a week. But if you get a couple of corporate gigs, you can get paid £600 for a night’s work.

In my experience some people aren’t interested in creative stuff when they do covers. Unfortunately people don’t see you as a real musician in the industry.

How do you think live music is seen now ?

I worried a few years ago that it was going to be everybody singing along to a MacBook (laughs). But it hasn’t gone that way, it’s gone back to bands. There has been a huge resurgence in the sales of classic guitars, Fender, Gibson and old analogue keyboards.

As a keyboard player and music technologist that really interests me. But still can’t afford the buggers (laughs). As a ’80s/90s musician it feels good that it’s going back to that as it worked really well. It’s fascinating. 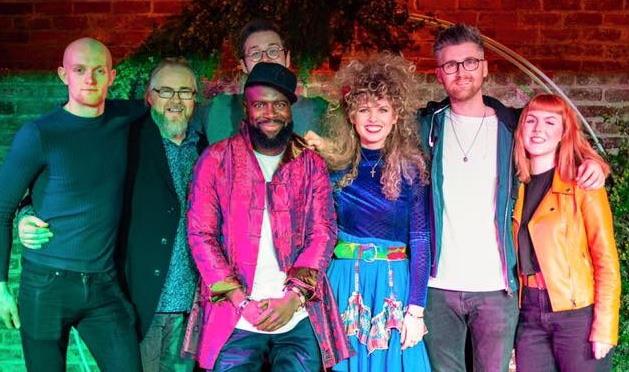 John 2nd from left and Cortney (in blue) with the live band.

There might not be the financial returns from music but it’s still valuable….

Yes, like you with film and video you do it because you want to do it. It’s a need. You get an idea in your head, you create it and put it out there. The only way you can justify your existence is by people saying that’s good and that’s a kind of ego rubbing there.

But I find it sad that in this commercial world so few people can make their way by just being an artist. A lot of artists I know have another job.

People don’t pay for stuff now with Spotify, and on You Tube there is visual tours of art galleries now. So they don’t have money for new art.

There are original bands out there who use the internet as their only outlet. A lot of niche stuff getting heard on Soundcloud and Spotify. They’re not playing live so not making any money at it.

But there is nothing like standing in the front row of a gig. You will never get that feeling from watching You Tube on your phone. I love going back and watching the ’70s/80s stuff that I missed like Led Zep.

That’s all great but seeing stuff live like Sam Fender is amazing. Sam is a good friend of mine from North Shields. He is a singer/songwriter. He has a really good band, it’s exciting, he’s touring again this year.

Some of his songs have a strong meaning and tackle things like suicide. He get’s it across well. Really visceral with hundreds of students at the gig jumping around. Me standing there like an old fart but it’s really great.

On stage it’s all live. There is no tech running. Just guitar, bass, drums, singing.

Sam has built a following with drip feeding a few original songs on-line, and with good management he has been guaranteed live gigs, TV stuff. He was on the Jools Holland show a few months back.

He is very media friendly, and I think you will see a lot of him. It’s very interesting watching his career develop. 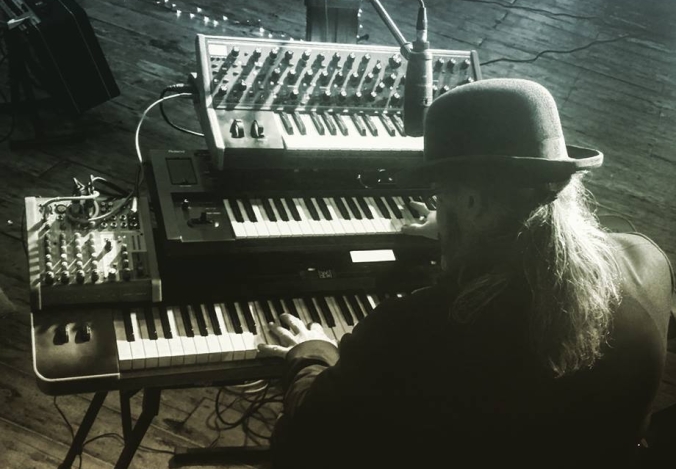 What does music mean to you ?

Music is a huge part of my life. It’s kept the wolf from the door in a financial sense but creatively it’s my steam valve. I feel really good when I write a song. It’s a soul thing, part of my make up is to be making music.