For 10 years VJ has been on the music scene fronting rock bands around Kent and London, gaining a biker following gigging at rallies and festivals. We last spoke a year ago when she was working with ex-Samson drummer Thunderstick, and UK rock band Black Roze – time for a catch up…To be honest it’s been a musical tornado for me with my bands…I’ve loved every minute.

2018 was a big year for Thunderstick. 6 months rehearsals and 3 huge shows. The first was a showcase in Leo’s RedLion in Gravesend. A special night being the first Thunderstick outing in 30 years and the first with the new line up. The energy was on fire and the show was enjoyed by Thunderstick fans old and new.

The second was an outdoor summer gig at the New Day festival in Faversham. Our thunderous midday set woke the sleepy audience who had been up late watching Hawkwind the previous night. It was definitely a show to remember seeing the crowd expand from around 50 to 1,000 by the end of our set.

Our third show was the biggest of them all at Hard Rock Hell in Wales. We played the main stage on the Friday, it was packed. The atmosphere was electrifying and the show went down a storm.

Are you still working with Black Roze ? Yes, and it feels like we made our mark on the classic rock scene in the UK. Until October 2017 Black Roze was a covers band playing pubs, clubs and festivals. Then we got offered an amazing gig at the Hard Rock Café in London, on the premise that we included some original material. So we put our energy into writing and realised we were good at it.

We released In the Darkness in January 2018 and our video has hit nearly 35,000 views on YouTube.

Is there a main songwriter in the band ? We all have a part in the creative process and I tend to come up with the lyrics and vocal melodies. I write about personal experiences, my performance is emotional and passionate. I sing from the heart and I‘m incredibly moved when people relate to our songs.

In September 2018 Black Roze was asked to perform at the Hard Rock Hell event at the O2 Academy in Sheffield. I attended the Sleaze event the previous year and said if there was one festival I’d like to play, it would be that one. So you can imagine how made up I was. We wrote another 5 original songs for the show and were received amazingly well, with some unbelievable reviews.

As I’m sure you can imagine being in two bands is exhausting with all the rehearsals, shows and planning. I put my heart and soul in to everything I do but I couldn’t maintain it for both bands. In November last year I decided to leave Thunderstick.

My passion is writing and being creative. Although I was able to be creative with costumes and theatrics I wasn’t involved in writing the music. For me there is no better feeling than performing your own music and people feeling it.

I went with my heart and left Thunderstick to put all my energy in to writing, and it’s paid off!

What are the plans for Black Roze ?  We have been writing and recording an album, set for release in late spring. Spiritual Hell conveys the paradoxical themes in our music. The songs encapsulate the extremes of human emotion and experience. If the song sounds upbeat and cheery look out for the dark lyrics. If it sounds dark and gothic, check out the positive twist. The track In the Darkness has a gothic/metal feel. It’s about the battle of depression but the tempo change halfway through unveils a message of strength and courage to finish the song. I am a woman of paradox!

Any live dates planned this year? We have some prestigious shows planned for 2019. March 29 we play the O2 London Islington and May 31 in Margate supporting the amazing Warrior Soul. June 2 we play Camden Rocks festival. Once the album is ready we will be taking it on tour in the autumn. All set to be a rocking year!

I’ve also got another writing project with a band called Lucifer’s Daughter. We have written the bones of 10 monstrous tracks and can’t wait to get them recorded and play live. The music has a massive NWOBHM feel with a modern twist and the creative process has been a lot of fun. We hope to get this out to you by the end of 2019, so keep your eyes peeled.

In the past few years have you seen many venues closing down ? Sadly yes. Being from Kent I check out the London Rock/Metal scene on a regular basis and have seen many venues die. It’s sad for rock fans and bands because in our world there is definitely an audience for it. Property is so valuable in London and some venues simply can’t afford to keep going. However us fans always find somewhere to rock out!

It’s always encouraging when we travel up the country. The Midlands and the North of England have a thriving rock/metal scene. That’s where it’s happening. What’s even more encouraging is the variety of ages on the scene, there is definitely a new wave of classic rock and metal amongst the youngsters. Men with long hair and eyeliner and girls in leather and lace are back! 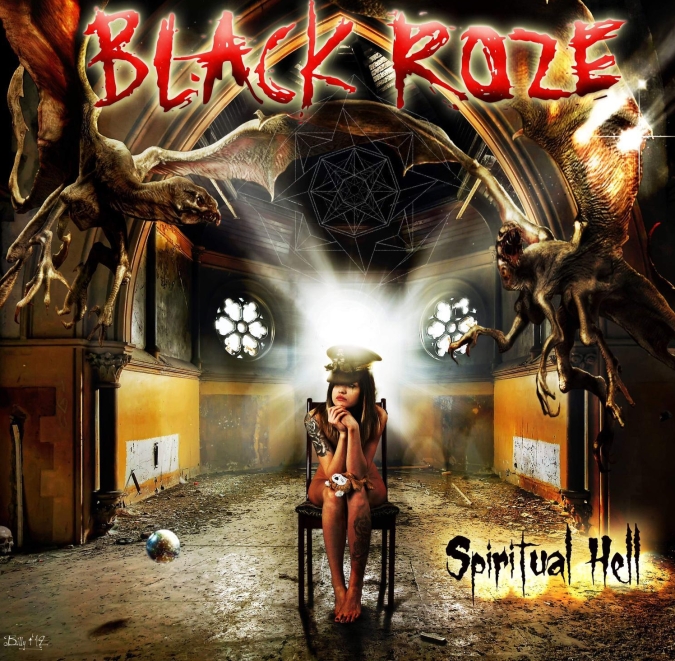 Back in the 80s I saw Girlschool and Rock Goddess and both are still touring now. Are they an inspiration ? Oh Yes! The Rock/Metal scene has been largely dominated by men. It’s getting better these days but back in the 80s those women were revolutionary. I saw both bands at Hard Rock Hell in Wales last year, we even shared a dressing room with Girlschool.

I love the fact that they have been rocking for 30 plus years and they still play with hunger and passion. That’s what it’s all about. If the band isn’t in to it, the crowd won’t be.

So for me if you still have the passion and the love for what you do there is always a place for you on the scene. I’ll be doing this until they kick me off stage…or I fall off! (laughs).

As I said earlier Black Roze debut album out this spring, Lucifer’s Daughter later in the year… both bands are literally bleeding songs. So it’s just a case of getting them rehearsed and recorded, then out for live shows…it’s all so exciting!