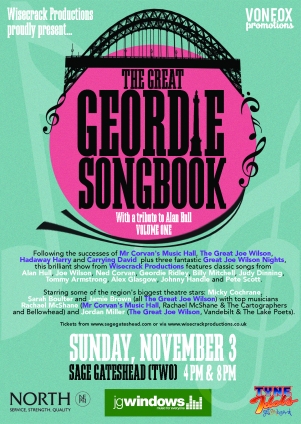 Ed’s company Wisecrack Productions have booked a November date at The Sage in Gateshead. The show features classic North East songs and comedy…

Not much working class history is documented so we try our best to help in a little way said Ed.

Ned would have been great to talk to. I think I would of got on really well with him. In the 1800’s he had his music hall next to the old South Shields ferry landing on the river Tyne.

Apparently it was a den of iniquity and the magistrates were constantly trying to close him down (laughs). But yeah he was a fantastic singer-songwriter and it’s brilliant being in this game because you come across some great stories.

How did the songbook idea come about ?

I was approached by Ray Laidlaw of Lindisfarne and Brian Mawson boss of Windows music shop in Newcastle. Brian has a real passion for Geordie comedy and songs.

The Geordie heritage really comes across when you talk to him. He has recorded all the stand up comedians like the Little Waster himself, Bobby Thompson.

They had just seen my play Hadaway Harry about the rower Harry Clasper. After the show they asked if I’d heard of Ned Corvan and Joe Wilson, both singer-songwriters performing in the North East during Victorian times. Much to my shame I hadn’t and they asked would I write something about Ned.

How much research did you do for the project ?

For the Ned Covan play I done about 40 talk’s with Dave Harker, he’s a North East historian who wrote a book Catgut Jim. The play was based on that. I couldn’t have done it without him. His research was fantastic.

Ned’s songs had great lyrics like the Cullercoats Fish Lass and Mally by the Shore, these were testaments in the 19th century to working class women. He also wrote songs about workers on strike supporting seafarers.

Songs with lyrics about day to day working class life. The more research we done we found it was a good story and it’s all about the story isn’t it.

It was a huge success and got a fantastic response which led us onto a play about Joe Wilson. That toured last September and that also got a great response. Both Joe and Ned shows played at The Sage so after the success they asked us ‘what you got next ?’

The Great Geordie Songbook was put forward, along with a tribute to Alan Hull so there will be a few Lindisfarne songs.

The show features some of the region’s biggest theatre stars, Micky Cochrane, Sarah Boulter and Jamie Brown who all appeared in The Great Joe Wilson with Jordan Miller from Sunderland band The Lake Poets.

We work with top professionals, we have a really good team and work well together and enjoy it. To be fair we don’t have the time or the money to muck about. But yes it’s a laugh from start to finish.

Our last show was Carrying David about the boxer Glenn McCrory. I told him it was really good to work on a play about someone who isn’t dead (laughs).

Off the back of all this we worked with Newcastle Council and got some blue plaque’s put around Newcastle. They’re all about leaving a legacy for what was achieved.

There is one for Harry Clasper on the Guildhall over-looking the Tyne, one for Joe on Stowell Street where he was born and a plaque on the Central Station where 2,700 people came to see Ned at the Olympic Theatre. That was the venue where Joe saw Ned, where he was inspired to write about working class life.

When the chips were down they really nailed their colours to the mast. We want to keep their legacy going for young people and for the next generation to be inspired. I think for protest songs young songwriters will go and raid the songbooks of Alan Hull, Joe Wilson and Ned Corvan. And that’s what we want, we need to hear those great songs again.

Tickets for The Great Geordie Songbook are on sale now only £20. There are two performances on Sunday 3rd November 2019 with the first curtain up at 4pm and then 8pm.