First time I worked with a stripper in the clubs. It was a Sunday morning. I walked into the club ‘Are ye’ the strippa or what ?’ said a bloke there. ‘I’m the what’ I replied (laughs).

The stripper walks into the dressing room with just a bag. I walked in with all my gear, microphone, speakers and stage costume. She did a five-minute act then taxi to her next gig. She did four clubs in a morning. Not bad work but I couldn’t do it. I’ll stick to singing.

A few week’s ago the blog featured stories from entertainer’s who performed in workingmen’s clubs. Ned Kelly, Jack Berry and a few more shared some great memories.

Carrying on that theme I spent time with Helen Russell at her home in South Shields. Helen hasn’t been feeling too well lately so I’m very grateful to her for taking the time to share her story….

As a kid I was an autograph hunter, all the stars like Laurence Olivier and John Mills. Great times. We weren’t a musical family but my dad could sing, he was in the Royal Navy.

You see I was born in the heart of London and when I was 15 I went into Entertainment National Service Association or otherwise known as Every Night Something Awful (laughs).

ENSA was an organisation set up in 1939 by Basil Dean to provide entertainment for British armed forces personnel during World War Two.

They held the auditions in the Theatre Royal on Drury Lane in London. They liked me and took me on. I toured all over the UK with ENSA. I was earning £7 per week and that was damn good money. Top act’s and names were getting £10 per week. It was a long time ago, I’m 95 now.

Where did you perform with ENSA ?

We played in the munitions factories when the workers were having their lunch breaks. We entertained in the theatres and clubs.

I sang Hey Neighbour and Sally that was a big number. I did imitations of Gracie Fields but never sang any Vera Lynn songs and I always finished my act with a tap routine.

I gave up when I got married. It was the done thing in those days. We met when I was entertaining in Belfast. Eventually we moved to England, and I got a job performing in the clubs.

The first club I played in South Shields was on Ocean Road which is long gone now.

At this time, we lived in South Frederick Street, and we had no telephone. I used to go down into the street to the telephone box and ring up the clubs to get gigs. I’d ask for the concert secretary, book the show and arrange the fee. I did that for years before the agent’s came in. Plus, we had no transport in those days.

For a show in Stanley, County Durham I’d pack my case with stage clothes, music sheets for the pianist, get the bus up from South Shields to Worswick Street in Newcastle, then carry my case across town to Marlborough Crescent bus station and go to a club in Stanley another 10 mile away. We had to be off stage and out by 10pm to get the last bus all the way back home.

A pianist joined us, he had a car. He charged us one and sixpence each for petrol. I also had to pay a babysitter seven and six a time. The first working man’s club I ever played was Windy Nook and we earned £1 each, there were seven of us.

Johnny Gaffney who wrote for The Shields Gazette, he had a great voice. No stage technique whatsoever but what a beautiful voice.

I went solo after that when agents came in and started working through the Beverly Agency. They got me lots of work around the North East and over to Carlisle a few times, lovely crowds there.

Money was coming through the clubs then, so concert chairman would only deal with agency’s. Which was great for me. No running around telephone boxes, made it much easier and as I was solo the money was much better.

Can you tell me about the photo above ?

Yes, that was in Balmbras old time music hall, Newcastle. I had been performing there. Bobby Thompson has played there, also Dick Urwin who was a good writer and great comedian.

You had to put him on in the first half because by the second he had too many drinks and would insult the audience. In Newcastle I also performed on stage at the Mayfair. 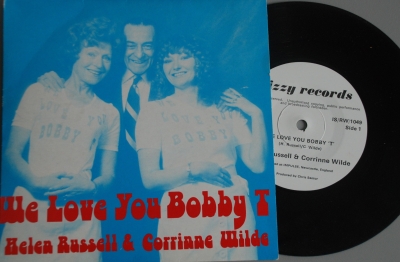 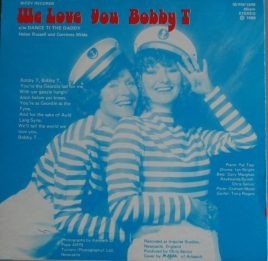 Can you remember the story behind this record ?

That was recorded in 1980 over the River Tyne in Impulse Studio, Wallsend. Corrinne Wilde had written a song about Bobby Thompson and she knew I could write, so I added a chorus. It was a lovely thing to do.

But selling records is a lot harder than making them. I sold a few at gigs. Bobby Thompson paid for the photographer which was nice.

Bobby T, Bobby T, you’re the Geordie lad for me

You’re as Geordie as the Tyne, and for the sake of Auld Lang Syne,

We’ll tell the world we love you, Bobby T.

Did you record anymore of your work ?

I recorded voice overs for radio and appeared on TV a number of times. I remember a part on a show with Martin Clunes, he was only 18 or 19 playing the part of a punk.

I was in a lot of productions including Emmerdale, that was in 1993, also children’s television and the latest Comedy Playhouse. I also played somebody’s wife in Spender written by Jimmy Nail. It was a nice part and I get paid repeats on some of them.

I have a book full of work and gig’s I’ve done over the years plus the fees. There’s a Spender episode written down in it as a repeat in Sweden, I got £9.56 for it (laughs).

Were you working through an agent ?

Yes Janet Plater, she represents a lot of actors in the North East. The original fee for Spender was very good I remember. The last job I did for Janet was a Tesco advert.

I’ve worked on a number of plays at The Customs House where Ray Spencer is now Director and an MBE. I got to know Ray in the ’80s when he was looking for a partner to work alongside him putting on some Geordie entertainment. Somebody recommended me and we worked together for a long time.

Our first gig was the Post House Hotel, Washington in 1988. I have my book here and for the Post House there is a note next to it ‘Ray has the receipts’ (laughs).

The writer Tom Kelly put me in a few shows and that got me and the same team work on Dirty Dusting written by Ed Waugh and Trevor Wood. That was very popular, we did it in about 2002. The show still sell’s today in different countries. 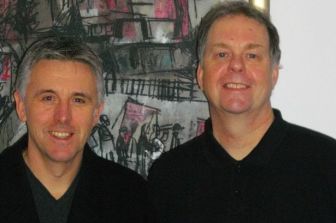 Helen recalls another memory from working in the clubs…

A lot of times I was the only woman because I was entertaining there and these were men’s clubs. I couldn’t get a drink at the bar. I had to give a man the money. He paid the man behind the bar, got the change and passed it to me with my drink !

Tell you what though, I never want to see another bingo card in my life (laughs).

Finally, what has working in entertainment meant to you ?

I wouldn’t still be doing it in my 90’s if it didn’t mean anything to me. I was born to do it.