Searching your family history can throw up a few surprises. My Great Uncle Alexander Allikivi was born in Russia at a time of political and social unrest resulting in two revolutions, the abolition of the monarchy and the establishment of the Soviet Union by the Bolsheviks. Have you ever wondered why some stubborn or awkward people are called bolshy ? Was it Bolshy Alex ?

Little is known about the life of Allikivi. He lived in South Shields during the ‘20s until his death in 1933. I know he received two Mercantile Marine and British Medal ribbons by 1921, but what had he done before that ? When did he first arrive in the UK and why did he leave Russia ?

In the search for some clues I read ‘The Kremlin’s Geordie Spy’, a book by Vin Arthey about father and son Heinrich and William Fisher. Heinrich was born in Russia in 1871 and William was born in 1903 in Newcastle. In 1921 the Fishers were in Moscow. The Spielberg film ‘Bridge of Spies’ starring Tom Hanks features what happened to William.

Reading Vin’s book I came across this…’He (Heinrich Fischer) maintained all his political links. He remained a member of the Russian Socialist Democratic Workers Party and in UK politics aligned himself with the Social Democratic Federation members who seceded to found the British Socialist Party, working for the party south of the Tyne, in South Shields, rather than in Newcastle’.

Was Allikivi involved in politics ? Were other Russians attending the meetings in South Shields and would he be attracted to gatherings with people who spoke the same language as him ? He would look forward to having conversations rather than using a few words or short phrases when meeting friends and family. 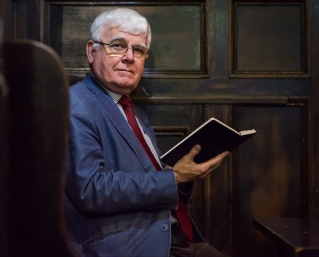 I decided to contact Vin and asked him what was the inspiration behind writing ‘The Kremlin’s Geordie Spy’ ? When I was freelancing in the ‘90s I was offered an Associate Producer role by Trevor Hearing who’d just had his series, ‘Stranger Than Fiction’ commissioned by Tyne Tees TV.

This was a series of six half-hour dramas and drama documentaries covering true regional stories such as those of the Darlington MP who turned out to be an international outlaw and leader of an obscure Chinese cult, and the Newcastle auction mart owner and television hypnotist who was jailed for swindling his mother out of thousands of pounds, and the County Durham relief bank manager who correctly foretold that his bank would be robbed and that he would be killed during the robbery.

Another story I researched was of Newcastle born William Fisher who turned out to be a KGB spy, used the name Rudolf Abel and was jailed for espionage in the United States in 1957. Five year later he was exchanged across Berlin’s Glienicke Bridge for the American U-2 pilot, Francis Gary Powers. Fisher’s birth in Newcastle had been ascertained by Newcastle University historian David Saunders, and I had a number of meetings with David during the pre-production phase.

Trevor Hearing and I were convinced that the story was worthy of a network production, but it was turned down by BBC 2’s Timewatch and Channel 4’s Secret History. However, I kept on researching and writing, because I was absolutely hooked by the story.

You see, I could remember when I was 12 year old watching the news story on my family’s first, rented, TV set, of the KGB spy Rudolf Abel, who was arrested, tried and jailed in New York in 1957. The Cold War was very real to me as a teenager in East Anglia.

My home was close to a number of United States airbases, and there were regular sightings of USAF Sabre, Phantom and Voodoo jet fighters and fighter-bombers.

I remember well the shooting down over the Soviet Union in May 1960 of Gary Powers high flying ‘weather reconnaissance’ aircraft, the ‘U-2’. As one of our teachers put it the day the news broke, ‘Awfully high weather we’re having these days,’.  Also I was still at school when the famous exchange of Powers and Abel took place.

You might imagine my excitement when I discovered that the Soviet spy at the centre of perhaps the greatest Cold War drama, the man who featured so strikingly in my school years, was a British subject, Newcastle born, at that. I couldn’t let the story go, and when I was approached by St Ermin’s Press to write a book I jumped at the chance.

St Ermin’s published it as a hardback with the title Like Father Like Son: A Dynasty of Spies. Later, Biteback Publishing bought the paperback rights and repackaged it as The Kremlin’s Geordie Spy: The Man They Swapped for Gary Powers.

When the Spielberg movie Bridge of Spies was released in 2015, Biteback reprinted with yet another title, Abel: The True Story of the Spy They Traded for Gary Powers.

Did you do any readings or tour with the book ? The book (or should I say books!) have been well received, although I have to be realistic – Fisher was our enemy during the Cold War, a villain of the piece – a villain of the peace even!

Over the last dozen years I’ve given talks on the Fisher story in various places and at a range of venues in Newcastle, North Shields, South Shields, Middlesbrough, Edinburgh, Reading, and there has been great interest in the United States, where the books have been reviewed for the CIA’s ‘Intelligence Officer’s Bookshelf’.

I visited the USA for research and subsequently got to speak at the Brooklyn Historical Society and at the International Spy Museum in Washington DC.

What is your background Vin ? I was born, brought up and spent my early adult years in Ipswich, and although most of my life has now been spent in the North of England and in Scotland, I still regard myself as an East Anglian.

I follow Ipswich Town football team through thick and thin – thin at the moment as we’ve just been relegated to what I still call the Third Division, and our arch rivals Norwich City have just made it back to the Premiership.

I’ve had a dual career, in education and the media, teaching in schools and a college of education then, when the birth rate dropped and the colleges were closing and merging, I was at Newcastle Polytechnic where I taught drama and media studies.

While this was happening, I started freelance scripting and reviewing for BBC Radio Newcastle and Tyne Tees. In the early ‘80s an opportunity arose to work fulltime at Tyne Tees, so I took it. Researching and producing across the whole range of the station’s output – current affairs, religious programmes, comedy, arts and features.

I went freelance again in the mid ‘90s, but at the end of the decade went back into university teaching and to heading up the TV Production degrees at Teesside University. Now, I’m settled in Edinburgh and supplement my pension with income from writing and speaking.

What are you working on now ? I review books about espionage, the Cold War and Russia for newspapers ‘The Scotsman’ and ‘Scotland on Sunday’. I’ve just finished a piece of ghost writing – a privately commissioned piece for a retired hydroelectric power engineer, and I’m currently clearing my desk, and my head with a view to tackling a new book – still nonfiction, but still under wraps.

As for my Great Uncle from Russia, Alexander Allikivi, I am still searching for some answers.

One thought on “RUSSIA’S GEORDIE SPY with author Vin Arthey”