None of us on the presenter side, perhaps with the exception of Jools and Paula who breezed through it all without a care in the world, could have had any idea that the show would be as seminal as it was. We certainly knew we were part of the ‘new wave’ and that we didn’t want to be all BBC and Top of the Pops-ish. 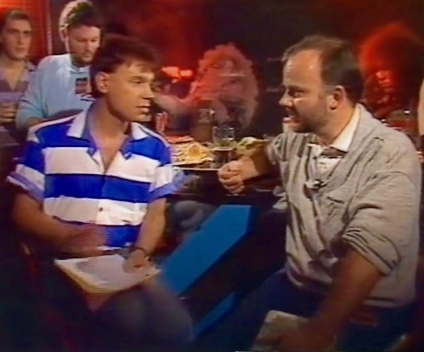 Gary interviewing John Peel on the Marc Bolan special in 1983.

When were you at The Tube and how did you get the job ? I was one of the original co-presenters on The Tube from Series 1, which started on Friday November 5th 1982. To give it a bit of extra thrill the programme makers had wanted to put some unknown faces alongside the two main presenters Jools Holland and Paula Yates. They certainly achieved that as few of us really knew what we were doing. It was all live, pre-watershed national networked TV and no second chances.

I applied along with about 5,000 other herbert’s who all thought they were cool, hip and groovy enough to be TV presenters. Along with Muriel Gray, Nick Laird-Clowes, Michelle Cremona and Mike Everitt I got the job. I was quite pretty and twinky back then, which might have helped. Unlike the hideous old bag I turned out to be.

Up until I arrived to do my first show, which was programme two, I had just breezed along thinking I could be wacky with impunity. But the reality set in when I arrived at Tyne Tees TV and was faced with having to do what TV presenters do. As a consequence of that, I looked and sounded like a rather camp yobby twat until I gained confidence.

Where did that come from? I somehow managed to make that last until I left two years later after the second Midsummer Night’s Tube special in late 1984.

My only regret is not being able to have worked more with Muriel. She was my soul mate and I adored her. We fired off each other perfectly and would have made a great team. Sadly there was only room for one M/F team and that was Jools and Paula. Any suggestion otherwise and someone would have called the police. Probably.

Did you realise how important and influential the show would become ? The chaos on it was quite genuine and the edginess a result of the fact that for most of the time we were left to get on with what we were doing without any strict direction or guidance to be pros.

Because it was live I only ever saw the programmes that I didn’t work on, all from the shitty council flat I was living at in North West London. No video and no internet or social media. If I didn’t catch it when it went out I didn’t see it. As a consequence of that I was only able to watch the shows I was in when my parents told me they had recorded the shows on VHS tape and did I want them? I was just about to say no, throw them away (!) when I thought the better of it, took them in a box and stuck them in my attic.

And there they stayed for years until I came to write my book. I digitised and watched them from behind the sofa for the first time. The performances blew me away. I can now finally see what everyone was going on about – but until then I genuinely had no idea.

Who did you interview and who was your favourite booking on the show ? My first ever interview was actually with Olympic athlete and local boy to Newcastle Steve Cram. During the production meeting that afternoon I said to Paula that as I had no interest in sport whatsoever I had no idea what to ask him. I mean, what do you ask runners for christ’s sake? How did you start running? How do you run? What’s it like running? Everything sounded ludicrous. We started laughing and then in desperation I said to Paula ‘I suppose I could ask him how big his knob is!’ – ‘Even better, ask him to show you!’ she trilled. I loved her then, she could be so much fun.

Next interview was with Andy Summers of The Police. That was my first interview proper really. He wasn’t responsive as I think he had no idea that The Tube wasn’t Radio 4 or The Old Grey Whistle Test. In the interview you can see him looking at me like ‘who’s this gobby little know nothing shitehawk ?’ Not one I recall with pleasure.

I had a much better time interviewing Ringo Starr, The Weather Girls, Eartha Kitt, Tony Visconti, Malcolm Mclaren, Mickey Finn of T.Rex, John Peel, Kajagoogoo and loads more interesting people who were not big music names but who had a part to play in the industry. Best of all I thought was video producer Tosh Ryan, who had made some wonderful stuff with one of my heroes Graham Fellowes (aka Jilted John). Great stuff!

How did you get started working in the media ? I trained as an actor in the mid to late 1970s. Believe it or not I am not a natural presenter (as archive footage of The Tube proves!). After spending some years touring with theatre companies on some pretty controversial plays I decided to try my luck at television and the rest is history. I can’t believe I just used that cliché.

I went on in later years to work quite extensively in radio, which I loved. I was a huge fan of Kenny Everett and he was my broadcasting inspiration. Kenny was a genius. I miss him terribly.

I did a lot of work pioneering the first radio programmes made by and for gay people on a pirate radio station in London in the early ‘80s. That was called Gaywaves, and it was broadcast through an arial cunningly hidden in the washing line of my friend Phil Cox’s 13th floor flat in the City of London. The archive of that unique broadcast is now in the sound archive of the British Library. I’m very proud of having done that you know.

I also worked legit too though, even co-presenting Midweek on Radio 4 for a couple of programmes (until it became obvious that my talents such as they were lay elsewhere).

For a long time I was also one of the contributors to ‘Malcolm Laycock’s Track Record’ programme on Friday nights at BBC Radio London. That was a hoot. I used to creep into the studios earlier in the day and record sketches for broadcast in the show that night. It was all very spontaneous and lots of fun with my friends Gary Rae, Stopwatch Roy Alexander, Alexis Colby Carrington, Clive Bull and whoever else happened to be wandering by at the time.

The show itself was often a bit of a bacchanalian booze up and almost as chaotic as the Tube. We even had to throw out Jah Wobble, who turned up three sheets to the wind and who we had to physically get rid of before he let rip with any naughty words. Happy days.

How did you get on with the other members of the production team and what did you do after The Tube ? To be honest, as I was brought up in the theatre I was closer to the production crew than most of the other presenters were. I didn’t click naturally with musicians in the same way that Jools and Paula obviously did. Actors and musicians are not natural bedfellows oddly enough. We come at it from different angles.

I didn’t fancy a trombone up my jacksie so I tended to keep away from the sharp end of the choon department and preferred to hang around with the production team. Michael Metcalf, Chris Phipps, Colin Rowell and many of the rest of the Tube team are all dear friends of mine even now. How they put up with my mincing about though I don’t know.

With Muriel and Malcolm McLaren in 1984.

The Tube is known for being taken off the air in 1987 after 5 years when Jools said the words ‘Groovy Fuckers’ and the world was so aghast that decent people everywhere had to be treated for shock. What isn’t so widely known is that I nearly beat him to it in series 1 !

Paula and I had been sent down to Steve Strange’s Camden Palace to do an outside broadcast. As Paula was heavily pregnant with her first child Fifi I did all the energetic stuff and at one point was put on the upstairs balcony to read out a load of local gig information.

During rehearsals it became apparent to me that being up there looking down with hundreds of clubbers around me I would be unable to see the floor manager or the cameras easily. So I remonstrated with the crew and director pleading health and safety. Being a nobody of course I was ignored.

When the cameras cut to me on the live broadcast I was surrounded by drunken punters and trying to deliver a long list of stuff to camera while they were jostling me and making wanker hand signs in front of my face. Normally I’d probably have joined in – but you cant do that on live TV can you?

I just managed to get through it before the urge to turn round and tell them to fuck off overcame me. But I don’t think the director knew just how close they were to an irritated ‘fuck’ being delivered live on air – four years before Jools did it for real. Perhaps if I had done I would be more famous? Bugger. Another missed opportunity. Oh well.

What are you doing now ? After I finished doing The Tube I went back into theatre where my heart and talent was best displayed. Since then I have continued acting wherever jobs are available and am a proud founder member of a group in London called Actors Writers London (AWL). This is a group established through Equity back in the late ‘70s to showcase the work of new writers and where they can hear their works performed by professional actors for the first time.

I now live down in East Sussex as I prefer to be a country boy. It’s here that I continue with my writing. I have just published my autobiography which I charmingly called ‘Spangles Glam Gaywaves and Tubes’ – it tells the story of my childhood and of growing up as a young gay man in the ‘70s and ‘80s.

Despite that disgraceful stuff it is also for everyone else that lived through those times or who might have an interest in it. My goodness me it makes a great holiday read and at a paltry £12.99 it is a must buy frankly. You can get it from all good online booksellers or from my publishers here: https://www.bookguild.co.uk/bookshop-collection/non-fiction/art/spangles-glam-gaywaves-tubes/  . Please buy it. It’s not the principle, it’s the money.