It’s 1980 and do you really need to know what happened to Brian Johnson ? ‘Nutbush City Limits’ was his audition song for a band he only knew the initials of. He backed the black. And won. 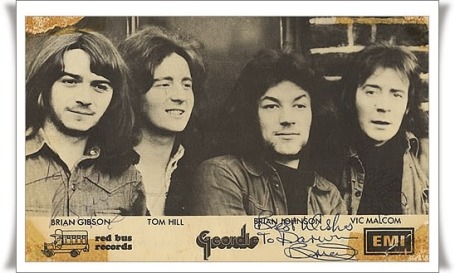 Rewind to ‘72 and with a line up of Vic Malcolm (guitar) Brian Johnson (vocals) Brian Gibson (drums) and Tom Hill (bass) Geordie released their first single ‘Don’t Do That’ and broke into the UK Top 40.

By ’73 the debut album ‘Hope You Like It’ was recorded for EMI. The same year included two UK hit’s ‘All Because of You’ and ‘Can You Do It’ with appearances on Top of the Pops. Everything’s gaan canny.

Competing with glam rockers Sweet and Slade the band went through some upheaval, Johnson left, Dave Ditchburn came in on vocals and there was a Geordie mark II performing. By the early ‘80s a new Geordie album was released on Neat records but without any major success they changed their name to ‘Powerhouse’. Hoping to change their fortune, they took another throw of the dice and with a new line up released an album, but eventually called it a day in 1986.

Original member Tom Hill remembers how  Geordie first got together… Well it was Vic Malcolm who approached me to join a band he was putting together, but I told him the band I was playing in at that time was better. So Vic came to a rehearsal, heard the band and agreed (laughs). The members in that band were me on bass, Brian Gibson on drums, Brian Johnson, vocals and Ken Brown on guitar. Not long after, Ken left and Vic joined. We named the band USA and away we went. We got signed and changed the name to Geordie. This was late 72. We ended up playing all over the world Australia, Europe, Scandinavia, Japan, all over.

Who were your early influences ? That would have been The Beatles to start with then got into Zeppelin, Deep Purple and bands of that genre.

Who were your first band and what venues did you play ? My first proper working band was with Brian Gibson on drums, we worked together since we were kids. We done the Northern circuit of working men’s clubs and night clubs. 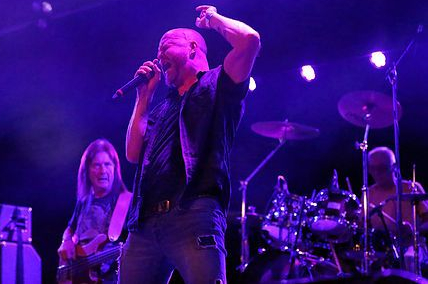 How did the new version of Geordie get together ? It all came together nicely really. Steve Dawson came in on guitar. Me and Brian Gibson wanted to work together again so that was good and Mark Wright joined on vocals. An agent called Pete Barton pulled it all together. The band started rehearsing and it’s sounding tremendous.

What’s the plan for Geordie ? We are working really hard on projects with the agent trying to get bookings in Rock Clubs, Festivals and any country in the world that wants to rock.

What does music mean to you ? Music has always played a big part in my life and has given me a great deal of pleasure. And I’m hoping it’s going to continue.