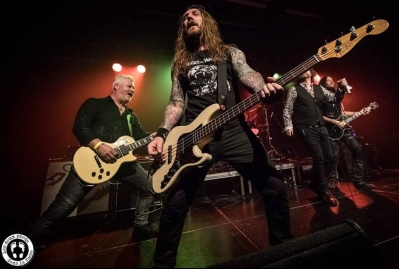 After their last album in 2016 and touring throughout Europe, the Tygers are back and about to release their new record ‘Ritual’. The second with the line-up of Jacko Meille, Robb Weir, Micky Crystal, Craig Ellis and Gav Gray….. Yes it was a lot of hard work, three months of prep, writing and arranging. So when we got into the studio we were ready for it. We knew we were gonna make a great album – and we have.

The band used Trinity Heights Studio in Newcastle, former guitarist with the Tygers, Fred Purser is owner and producer…..Yeah lovely bloke, we got on really well, he loved my tea and morning hugs (laughs) ! He would say to me during a take, ‘Try and play less hard’, so I tried, and then he`d say, ‘Nah, just play the way you do’. He had a plug in to pull it back in (laughs).

Some of the lines I’d written and rehearsed with the lads sounded fine until the guitars were layerd. Being in a two guitar band sometimes requires that ‘less is more’ and most times that’s true, the bass doesn’t need to be too busy, just a really solid rhythm is all that is needed on a lot of hard rock songs.

My thing has always been for the rhythm and timing over busy, it’s all about the one. I was never a practising musician, just a frustrated drummer ! 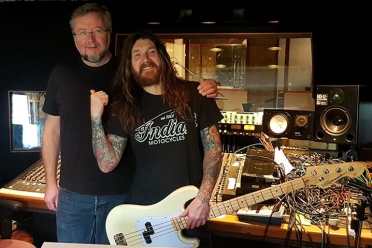 How did it go in the studio ? On day one we just set up, got some drum sounds, got comfortable and worked towards day two to have some drum and bass takes with guide guitars. This is how we do it. We will play the songs that have an easier approach, leaving the harder ones for later.

Craig is in the live room. Me and Mick would be in the control room with Fred. We had worked on the songs for months so when it came time to record the song’s it didn’t take long. We were well prepared. Me and Craig (drummer) did a couple of the songs in one take as a drum n bass jam, which are on the album.

Robb added his guitar and Jackie flew in from his home in Italy on the last week of recording to do the vocals. It all worked well, everyone’s playing on the record is fantastic and because we were tight, the songs just came together as we expected.

The whole session and working with Fred was, for me, one of my best yet. It`s a great place to make a record.

How did the songs come together for the new album ? We each work on ideas at home doing demos and then take them into reheasal’s and work out how it`s all going to fit together. ‘This is the bridge, That’s good for a chorus’, Big riff intro`sort of thing and dissect the structures for each song until we have a rough arrangement. Then all the bit’s that make a song special, you fine tune them.

When they get into the studio we play them through and maybe somebody make’s a mistake but sometimes that’ll work within the song – a nuanced piece, a happy accident really. When that happens, it’s a great feeling. That’s a great part of making music – just by playing, those accidents can become your favourite part of the song.

Do you write some songs just to be recorded in the studio ? No, all songs are wrote to play live. Whether or not we play all of them live is another thing. I don’t know any band who plays just for the studio and to be honest you should be able to play all your songs live.

How did you join the Tygers ? This latest run has been since 2011. But back in the ‘90s I originally met Jess Cox at a gig I was playing at the Riverside, Newcastle. He approached me after the gig, told me about owning Neat Records and having a few bands on his roster. He was looking for a bass player for future touring and recording. This was a big deal for me cos I was just playing around local bars on Tyneside.

We met up and he mentioned Blitzkreig who I had heard of and I said yeah sounds good so I done that for a short while, doing a handful of shows and a festival in America.

Then Jess wanted to get the Tygers back together, this was 1999. Robb Weir was already in and me and Chris Percy the drummer came as a rhythm section cos we had bounced together from band to band. I said to Jess he (Chris) was really solid and will kill it. And he did. Then a guy you interviewed not long ago, Glenn Howes was brought in on guitar.

We rehearsed for a couple of months in the Off Quay buildings near The Cluny in Newcastle then went off to Germany to play the Wacken Festival in front of 10,000 people. The biggest gig of my life at the time.

But when we got back to the UK there was some bitterness within the band and it ended, it’s the way it goes sometimes. But Jess had always been good to me and got me a lot of gig’s. I think around that time I must have been in about 3 bands on his roster.

Then out of the blue I got a call from The Almighty. They were a big name so what ya gonna do eh ! I turned them down haha! I was fed up with the music scene and wanted out. It wasn’t till a few months later I came home from a night out and my girlfriend told me that the Almighty management had been on the phone again. I thought, hell, why not, it’s what I wanted to do so jumped on a bus down to Oxford after learning 5 songs, talked to the band, played a bit and got the job.

Loved my time there but unfortunately only lasted about 18 months cos the band were dropped from the label.

A couple of years later Ricky ends up in Thin Lizzy, he’s a great bloke and I still keep in touch with him. In fact he just got the Tygers the gig of supporting Saxon in the Dusseldorf Arena. He called me up and said ‘Can the Tygers do it ? I talked with the rest of the band and our manager and agreed it would be great for us to play in front of 7,000 people just before we release our new album.

(Since this interview Saxon have been forced to postpone all upcoming gigs in 2019 due to frontman Biff Byford undergoing heart surgery. Get well soon Biff).

In the Tygers live set the band play a few songs from their first album Wildcat…..Love playing those songs from the first album, it’s my favourite, there was just something about it. It’s got a great, dirty sound – it’s got attitude, and Robb wrote song’s from the heart.

When it was released in ’79 they were just out of the punk explosion and ‘Insanity’ was one of my favourite songs. Around that time I went to see local bands Fist, Hellanbach and Angelic Upstarts in South Shields. The first single I bought was Hanging on the Telephone by Blondie, still one of my favourite ever songs. Then I saw Lemmy on Top of the Pops and thought ‘That’s what I wanna do’.

It wasn’t until I was 21 when I started playing bass in bands. Everyone wanted to be a guitar hero so I thought that if I buy a bass I might get a gig haha. I played along to my favourite records for a year and just wanted to join some band’s, have a laugh, have a beer and just have some fun playing.

Being from South Shields I started looking around the Tyneside, Sunderland and Washington areas to get a few gigs. That’s where I joined a band called The Junkies around ‘89/90. That was my first band and first gig. 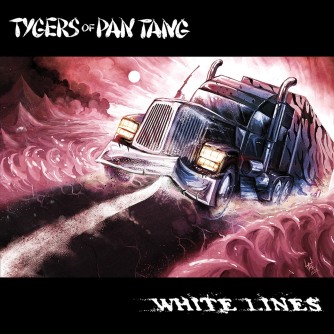 Are you looking forward to the new album release in November ? Yeah, the record company will set the exact date. The mix is now finished by Soren Anderson he worked on our last album. Harry Hess will be mastering it again, making it as fat and big a sound as you possibly can – basically sprinkling fairy dust on it (laughs).

Finally it goes to print so yeah the record company will have a date soon. I’m just really looking forward to hearing the final tracks cos we worked so hard on that album. I know it’s a bit of a cliché but we really feel it is one of the Tygers best albums.

‘White Lines’ will be the first single, released on 27th September on all platforms, and a 12″ vinyl limited release of 500 copies for all you collectors will be available from: http://targetshop.dk/…/tygers-of-pan-tang-white-lines-12vin…