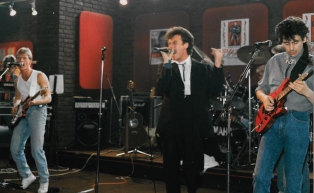 Last time I interviewed Alan (Sept.13th 2019) he talked about his time in North East band White Heat who were signed to Richard Bransons label Virgin. After they folded in ’82, The Loud Guitars were born….

There was three of us from White Heat, me, Bob Smeaton, and Col Roberts, we decided to control everything. Fund the gigs our self and not look for management or deals.

Because there was a dark cloud over the ending of White Heat we thought this self-containment idea would help clear it. Virgin eventually let us go so we had total control, it was very cathartic.

For recording we funded it all, brought in some really good players, professional and slightly younger so from a live point of view they super charged the band. We had Martin Campbell, brilliant rock guitar player, Gary Cowey and Stu Haikney were involved early on as they had their own studio.

Bob and I had songs left over from The White Heat days and really it was a very important time for us to be able to do it independently. When I look back on what I’ve done I’ve always been happier when it’s independent.

We built on the legacy of White Heat and we put out new material with professional musicians who we paid. Now that sounds obvious to pay them but it is the correct way, the job is done well and it makes for a happier work place.

By the early ‘90s The Loud Guitars run their course then I made the decision that was it. From the recordings I felt we pushed the quality up from White Heat days as in that band I felt our studio output didn’t reflect what we were like live.

However, we still weren’t getting a lot of radio play and I became obsessed to write and record music of a standard that would get radio play. 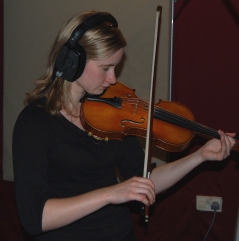 Sarah in The Cluny. 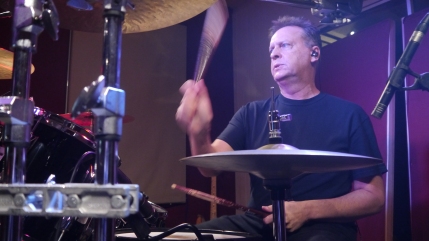 I took time out, this was when technology was advancing at a fair old rate and recording facilities were becoming affordable. So, I invested quite a bit in new instruments, microphones and developed a skillset to record my own stuff.

I set up my home demo studio where I could take the song to a certain point, essentially getting the song down in the right key, right speed, then taking it to my studio of choice, The Cluny Studios in Newcastle run by Tony Davis.

Tony is a fantastic engineer and a brilliant musician so we’ve developed a good relationship over the years where I might play a bit guitar for him on some of his recordings. A lot of North East bands would have recorded there in what is a highly competitive industry. 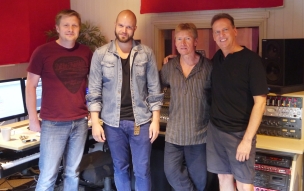 When did you put the Attention Seekers together ?

The concept has been around for ten years now, it was to be primarily song writing and recording. I wanted a change from what I’d previously done because the main thrust of White Heat and Loud Guitars was live performance. In a way having the band has unified my family.

When I was song writing in the studio with Bob Smeaton on the record deal after White Heat had finished, I would only do it if I could bring my wife Viv down with me. I’ve seen too much destruction with musicians and their nomadic lifestyle (laughs).

We wanted to share this experience and enhance our life together, but they weren’t happy, so I walked away from it. A few days later I got a call saying, ‘Ok bring her down but she’ll have to cook (laughs)’.

Viv came down and we enjoyed the time together. It’s always been like that since those days. We bought a people carrier to get to gigs, my daughter has played in the band and Viv’s the road manager when we go out at gigs.

I didn’t trade on the back of previous bands because Attention Seekers were so different. We didn’t want people turning up to a White Heat rock gig and end up listening to three acoustic players.

In fact, our first gigs were on busker’s nights where we tried out new material and there was no pressure. My eldest daughter was becoming a proficient violin player so she came along, my brother in law had a nice voice and had never sung live so we eased him in and that added to the busker night.

Publicans were impressed after a few songs and asked us to return and do a full gig. This was around ’98 when we started getting around the pub circuit and we adopted a very low-key policy of no individuals, no front men. This attracted really good musicians who liked the non-committal feel to the band.

I explained this wasn’t about a unit of a traditional band it was about bringing in the right people when they were available because they still had their main bands with regular gigs.

We were getting popular on the whole circuit, places like The Magnesium Bank in North Shields, The Smugglers in Sunderland and Tyneside Irish Centre in Newcastle.

Sounds like there was more emphasis on the song rather than a band ?

Yes, there was I had done the live band thing which I enjoyed but if I had something with a promoter or radio it would always be labelled as The Attention Seekers. There is a consistent feel that runs through the songs.

I’ve found by taking this approach local radio play has increased significantly with Paddy McDee and Julia Hankin playing us on a regular basis. St James’ Park (Newcastle United) play us because some songs have a regional feel about them. 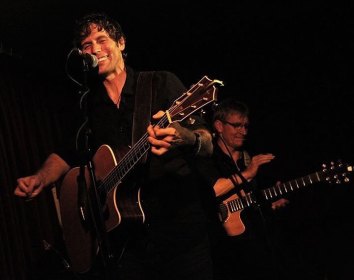 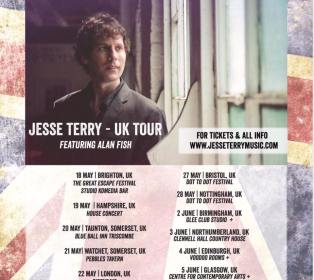 The album ‘A Song for Tomorrow’ has overall sound of Crowded House/Waterboys with an acoustic version of the Boomtown Rats song ‘I Don’t Like Mondays’ in the middle. A strange choice compared to the other songs ?

Yes, playing original music can be a big ask to an audience and sometimes you’ve got to give them something back. Something familiar. We arranged it without the bombastic drama of the original with the ‘Tell me why’ sentiment slightly changed.

The audience realize what song it is by the second verse. It’s ‘Tell me why’ this is still happening because that song is nearly 40 years old.

It’s talking about mass shootings in America that happened and are still happening. It’s a very difficult situation for USA to solve because of the gun laws.

The American singer, Jesse Terry, gave the song another edge with his accent and we wanted to give the song an anti-gun feel. But from the beginning we know it is a very good Boomtown Rats song, the melody, the lyrics all fitted together so you knew it wasn’t going to fall apart.

How did American singer/songwriter Jesse Terry get involved in The Attention Seekers ?

I was watching the TV program Tyne and Wear live and the music show Cookin’ in the Kitchen’came on. There was a great performance from Jesse on there and I wanted to pass on my comments so tracked him down.

It was like serendipity, he was looking for a UK based guitarist and had checked me out on You Tube – the upshot was, would I be interested? And I was looking for a vocalist to record with Attention Seekers – you don’t turn away from these moments so a deal was struck.

The album A Song for Tomorrow is the result of our coming together. Jesse has quite a following in the States and gets the songs played out there.