Following the success of the album Graham-Purkis put a live band together for a series of festival dates and live gigs. The band recorded one of the shows and Roulette Records are releasing the live album this month.

I caught up with lead vocalist Raven and asked her about the new album…. I’m pleased with the album. It’s raw and genuine and I’m very excited about the upcoming release. The whole gig was a blast from start to finish, a beautiful way for me to cherish the memory of that performance.

It’s my first album with the band and I’m really hoping that people listening to it will pick up on the enjoyment that I and the guys had on stage that night.

How did the job with Thunderstick come about ? I was very fortunate that a guitarist friend of Barry’s had seen me play with my covers band some months earlier and passed my name across to him. I am very grateful that he did ! Although I very nearly didn’t audition because I wasn’t convinced my voice would suit, but love it and I’m learning to perfect the scream.

I’ve been with the band about 11 months now and couldn’t imagine doing anything different.

What is your performing background and are you from a musical family ? I did Theatre Studies at school and performed with the local dramatic society. But my love of music has come from my Dad singing around the house. Although he would confess he could never remember the lyrics, so it was always the same lines repeated over and over !

Have you a highlight or a magic moment on stage ? I would say playing The New Day Festival in Faversham last year, and looking out to a crowd of complete strangers singing the songs back at me. That was an amazing feeling, but then so was going abroad to France for the first time. We had such a great time and met so many amazing people. 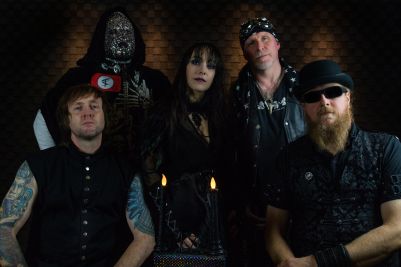 Have Thunderstick confirmed any live dates, and anywhere near North East UK ? We are in Birmingham at Breaking Bands on the 24th May, and I’m extremely excited to be launching the next album in my home town of Deal at the Astor Theatre on the 8th August. Would love everybody to come and see where I live!

It would be so good to come up to the North East of the country to play live, an area that takes it’s rock and metal seriously. We have numerous friends and followers, not to mention fellow musicians on our Thunderstick social media pages that ask if the band will be heading out soon – as soon as we have confirmed dates we will let everyone know.

‘Something Wicked This Way Came – Live in France’ is released 20th March 2020 on Roulette Records.

A follow-up studio album is currently being recorded and is scheduled for release in July 2020.