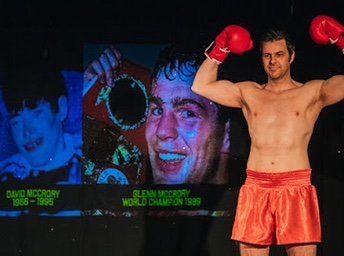 Micky Cochrane on stage with picture of Glen McRory behind him.

‘Carrying David’ is a one-man play reflecting the highs and lows of Glenn McRory’s unrelenting drive and sacrifice to become the first world boxing champion from the North East.  After performances last year, a short run of dates were scheduled for April.

The play was written by Ed Waugh (The Great Joe Wilson, Hadaway Harry) and starring Micky Cochrane. When I caught up with Micky I asked him what impact the Coronavirus pandemic having ? Unfortunately the shows at the Newcastle Theatre Royal and Canal Cafe Theatre in London have been cancelled. I really hope we can reschedule but it’s all so uncertain now. I’d worked hard to get into really good shape so I’ll continue with that. Long term I don’t know what will happen.

What other work have you done with writer, Ed Waugh ? One of the earliest plays of my career was The Revengers written by Ed and Trevor Wood. I also did Alf Ramsey Knew My Grandfather by the duo. In recent years I’ve worked a lot with Ed who I get on very well with. I played music hall legend Joe Wilson in the ‘Great Joe Wilson’ in 2018 and grew to have great affection for the man.

Have you had a magic moment on stage when it’s all going great ? Absolutely. It’s a great feeling when you know going into a run how strong the show is and then the audience lift it to another level. I remember doing ‘A Nightingale Sang’ by C.P. Taylor. Most of the cast were on stage for my entrance and I couldn’t wait to get out there. The script is so good and the cues so fast it was such a buzz to be part of it.

With ‘Carrying David’ in every performance I felt I recognised a moment where I knew the audience were with me and with the story. That’s a pretty special feeling.

How did you get interested in acting ? I always acted and performed at school. Got my A for Drama but left school thinking it’s not something that someone of my background does. I maintained an interest from afar but didn’t see it as a career. I had all kinds of offers to join youth theatre and Drama clubs.

After years of many jobs and no direction it was my mother who persuaded me to give it a shot. I took a degree, got an agent and became a professional actor.

Is stage work in your family ? Singing and performing definitely. My mother is an amazing singer with a lovely voice. My older sister and younger sister are both good singers. My younger brother Stephen is a singer and fantastic songwriter and we are in a band This Ground Moves. My niece has an amazing voice. We’re the Geordie Osmonds.

Have you worked in TV or radio ? Yes, highlight was doing Man Down with Greg Davies. A great experience and a good laugh. Done quite a few ads in TV and radio.

What role would you like to play ? It’s ambitious, but I’d love to explore the part of Johnny Byron in ‘Jerusalem’. Maybe a ‘Line of Duty’ villain, love playing shady characters. I also have a real interest in playing strong characters or any who have a vulnerability to them.

Have you any work lined up this year ? I was meant to be working at Live Theatre this summer, with November Club in late summer and at Alnwick Playhouse at Christmas, but Live Theatre has been cancelled for now. It’s fingers crossed for the others. Who knows what happens next. It’s a sad and surreal situation we’re in.