Unfortunately due to the Coronavirus pandemic the Local History library is closed so confirming details about the South Shields resident featured in this post has proven a bit more difficult.

If a relative is out there please don’t hesitate to get in touch. We are looking at a Captain C.W. Dick who was in command of a ship that ran a blockade during the Spanish Civil War.

The Hansard revealed questions were asked in the House of Commons about the Civil War and the role of British Merchant ships. First Lord Admiralty, Sir Samuel Hoare said.…

’The instructions to His Majesty’s ships have, since the beginning of the civil war in Spain, been to the effect that if it comes to the knowledge of a British man-of-war that a British merchant ship is being interfered with on the high seas by a Spanish warship, the British ship is to be afforded protection’. 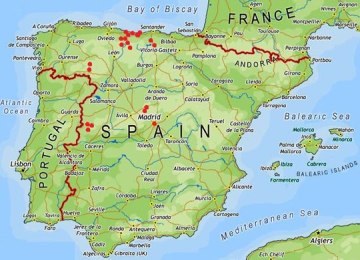 I came across a newspaper report in The Shields Gazette, April 28th 1937 that featured Capt. C.W. Dick and the Olavus, a ship built in South Shields in 1920 at the Chas Rennoldson & Co. yard.

The Hull steamer Olavus under the command of Capt. C.W.Dick of South Shields which recently ran the blockade of Bilbao is expected to make a further effort next week.

It is understood she will sail from Liverpool for Barcelona or Valencia with a cargo of foodstuffs. The crew however, have intimated to owners, the Ohlson Steam Shipping Company from Hull, that they will not sail again for Spain under any circumstances.

The crew consists of British engineers and Dutch seamen who were signed on at Rotterdam after the original Shields crew had refused to sign on again for Spain.

For the past day or two Capt. Dick, whose home is in Ravenbourne Terrace, has been in Rotterdam awaiting instructions from the owners. At one time it was thought the Olavus would sail again from Holland, but the crew intimated that they did not wish to sail on any conditions.

Captain Dick’s last voyage to Bilbao was an exciting one. In letters to his wife he describes how the Olavus and the Thorpehall, were at one time surrounded by six battleships representing the insurgents.

‘Thank goodness it is all over and we are out of danger. It has been a great responsibility with all these men’s lives’. He explained that the reported mutiny on board the Olavus was pure fiction.

‘There was no trouble with the crew when she left Nantes. The only trouble we had was at the French port, where the crew of Dutchmen, learning they were to sail for Bilbao, asked to be paid off’.

Captain Dick pointed out that he could not do this and the crew approached their consul, who told them that nothing could be done, and that they would have to sail.

Thirty hours out from Nantes, they were inspected by a rebel cruiser, but no action was taken until two hours later when a shot was fired over the Olavus.

He carried on at full speed for about five minutes, then the guns of the harbour fortress began to speak.

Capt. Dick was almost blinded by the second shot, which fell 40 feet astern the Olavus and thinking that the fortress had mistaken him for a rebel gunboat or did not want him to enter until daylight, he put about.

In running for the open sea again, the Olavus went through the supposed minefields. The crew by this time were terrified stated Capt. Dick. Describing the holding up of the Thorpehall, Capt. Dick said that Spanish, German and British ships had cleared their decks for action.

‘I expected a battle to start any minute’ he stated in a letter. ‘I was waiting for the rebel cruiser to start, but he slunk away followed by one of our fellows’.

After leaving Bilbao, the Olavus was stopped by a rebel cruiser and the German battleship Von Spree. The German ordered Capt. Dick to alter course and head for land. Unable to offer resistance and confident that the Olavus was about to be interned, the captain did so.

A few minutes later however HMS Hood arrived on the scene and the rebel and German gunboats steamed away. The Hood signalled to the Olavus ‘Good night and good voyage’.

A search reveals that the Thorpehall was attacked and eventually sunk near Valencia on 25th May 1938. HMS Hood was sunk during the Battle of the Denmark Strait in the Second World War, May 1941.

But what happened after 1937 for Captain C.W.Dick ? There is a record of a British Prisoner of War held in Japan on 15th Feb 1942. Is that him ? Hopefully more information can be found to confirm the story.

More research will be done when the Local History libraries open but for now in Postcards from Spain, the search goes on for North East stories from the Spanish Civil War. If you have any information please get in touch at garyalikivi@yahoo.com