After recent posts about the Spanish Civil War, I asked for any information relating to the North East men and women who were involved. Tony Fox from Stockton immediately made contact…..

I am a member of the International Brigades Memorial Trust which has been very supportive to my work, especially the President Marlene Sidaway and the Historian Richard Baxell.

I’m currently working on two projects about men and women from the North East who travelled to Spain during the civil war.

The first project is with Middlesbrough Council on the memorial plaque in place at Middlesbrough Town Hall. The plaque is for ten men from Teesside who served in the International Brigades, and was produced in 1939. It is thought to be the first Brigades memorial produced in the UK.

I am also working on a memorial to Stockton’s International Brigaders which I will write about in another post.

Reading your previous post Postcards from Spain (1) I can add information about the two men from Whitburn who didn’t have any dates or locations when they were killed in Spain.

Edward Tattam listed as ‘Missing/killed in action 17/3/1938 at Belchite-Caspe, Aragon.

William Tattam is listed as ‘date of death 17th July 1937, believed to have died when the lorry he was riding in overturned on the way to Brunete’.

Harry Reynolds is listed as ‘date of death February 1937 at Jarama. With a very interesting footnote – ‘Left for Spain in a group led by Wilf Jobling’. 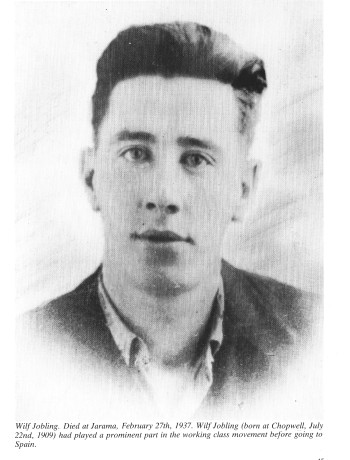 This confirms one of my assumptions. I knew that the volunteers travelled in groups to Spain but thought they were led by ‘responsibles’ – leading activists who cared for the volunteers and provided political guidance.

As Harry Reynolds, led by Wilf Jobling, arrived in Spain at the same time as the men I am studying, the Teesside Brigaders, it is reasonable to assume that the North East volunteers travelled together as a group.

Tony added more detail to the story about the men behind the North East recruitment…..

North East recruitment of volunteers was organised by a small group of close friends who were graduates of the International Lenin School in Moscow.

George Aitken was the North East Coast District Secretary, covering Northumberland and Durham. George Short was a Communist Party Central Committee member and Teesside Secretary of the NUWM, he originated from Chopwell, locally known as ‘Little Moscow’ as it had a Communist club.

South Shields men were recruited by a guy called Charlie Woods. Finally a Sunderland branch activist, Frank Graham, in recruiting twenty volunteers, it was the largest individual town contingent in the North East.

Posting soon another addition to Postcards from Spain from Tony Fox. If you have any information about the North East men and women who were in any way involved in the Spanish Civil War please get in touch at garyalikivi@yahoo.com.

Sources: No Justice Without a Struggle:The National Unemployed Workers Movement in the North East 1920-40 by Don Watson. Merlin Press 2014.

From the Tees to the Ebro David Goodman CPGB, 1986.

3 thoughts on “POSTCARDS FROM SPAIN (5)”