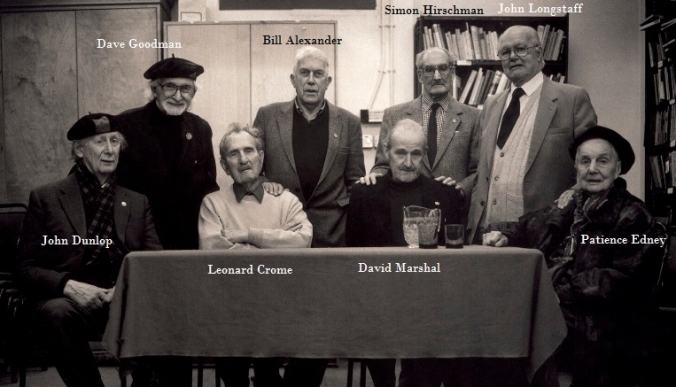 While researching for the Teesside International Brigades memorial, Tony Fox repeatedly came across one name – David Marshall. David was one of the first British volunteers to fight in Spain. Tony takes up the story… On the outbreak of the Spanish Civil War, in September 1936, David had travelled to Spain to join the International Brigades in Barcelona. He joined one of the first groups, the German-speaking Thaelmann Battalion, with whom he fought to defend Madrid.

On 12th November 1936, a sniper’s bullet hit him just above his ankle. He was removed by stretcher under heavy fire, then transported on a lorry for more than two hours to a field hospital. After treatment in Alicante he was repatriated to England at the end of 1936 where he began campaigning for aid to be sent to the Spanish Government.

However his significant contribution on Teesside has not been been looked at. On his return from Spain he actively campaigned for aid to Spain. In 1939 he was instrumental in the production of the memorial. He was guest of honour with Frank Graham and John Longstaff when it was dedicated in 1991 and again at the 1996 rededication in Middlesbrough Town Hall.

When the Second World War broke out he, like many other Brigaders, was at first barred from entry into the armed forces. Working in the Civil Service he uncovered and published the directive barring Brigaders from serving, and worked to overturn the policy. The policy was overturned when Churchill formed his National Government.

David volunteered and served in the engineers, however when he was interviewed about his background in Spain, the Captain wrote on his records that David ‘was Communistic or fascist’, and even as a corporal he was never placed on guard duty when abroad. He fought in the Normandy campaign, liberating Belsen and serving in the occupying forces until 1947.

Marshall returned to Teesside after demobilization, returning to the ministry for Labour once again. He maintained his links with Brigaders. It seems likely that Tommy Chilvers, who painted the Teesside International Brigades memorial introduced him to Ruth Pennyman. Ruth had formed her Basque refugee children into a concert party, and Tommy played the guitar.

David worked as a carpenter on the sets until joining the Joan Littlewood Who’s Theatre Workshop which began life at Ruth Pennyman’s home in Ormesby Hall. In 1975 his wife Joyce died, afterwards he bought a sailing barge which he refurbished.

Marshall was instrumental in the formation of the International Brigades Memorial Trust in 2000, serving on the executive committee, with fellow North East Brigaders, Dave Goodman, Frank Graham and John Longstaff.

Sadly, David died on 19th October 2005, his partner Marlene Sideaway is currently President of the IBMT, she led the 2009 IBMT AGM in the North East, in which the Teesside International Brigades memorial was rededicated and relocated within Middlesbrough Town Hall.

She also donated some of David’s materials to The Dorman Museum. David was a superb poet, I am honoured that Marlene has signed a copy of his 2005 book The Tilting Planet, which includes the wonderful I sing of my comrades.

If you have any information about the North East men and women who were involved in the Spanish Civil War please get in touch at garyalikivi@yahoo.com