A significant event in Jarrow’s and my family and history research, was the Jarrow Crusade of 1936. This was the march to London to protest about mass unemployment and extreme poverty in the town.

Off the back of the 2009 documentary Little Ireland, Tom Kelly (Jarrow playwright) and I put together Jarrow Voices, a short film highlighting the involvement of Ellen Wilkinson MP and the Jarrow Crusade. The film also featured the story of William Jobling who lived in the town. (Link at the bottom of the page)

The film was premiered on 10th December 2009 at the Human Rights Day in Newcastle City Library, and in October 2011 screened at the Films for Justice in the Tyneside Cinema, Newcastle. Here is the script that Tom prepared for the film. 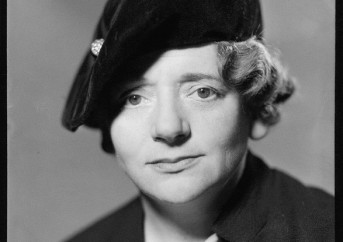 Jarrow Voices looks at two iconic events associated with the town, the gibbeting of William Jobling in 1832 and the Jarrow Crusade of 1936. Voices that need to be heard.

It was in June 1832, that Jarrow pitmen William Jobling and Ralph Armstrong, attacked South Shields magistrate Nicholas Fairles. Jobling was arrested on South Shields beach, tried and found guilty at Durham Assizes and sentenced to be hung and publicly displayed upon a gibbet on Jarrow Slake.

Jobling being placed upon a seventeen foot high gibbet underlined the power of authority and sent a powerful message to the unions, their voice was virtually silenced.

Fairles, prior to his death, acknowledged that Jobling was with Armstrong but did not carry out the attack.

Isabella, Jobling’s wife, could see her husband clearly from their cottage near Jarrow Slake. Sadly she had no memory of her husband when she died in Harton Workhouse in 1891.

William Jobling was displayed on a gibbet that became known as ‘Jobling’s Post.’ He hung for three weeks until his friends stole the body. To this day we don’t know where his body lies.

The gibbet remained on Jarrow Slake until 1856 when it was taken down during the development of Tyne Dock. Today you can find the gibbet in South Shields Museum.

Jobling worked at Jarrow’s Alfred Colliery which closed in 1852. In that same year Palmers shipyard was opened by Charles Mark Palmer and his brother George. Palmers became one of the greatest shipyards in Europe. However when Palmers closed in 1933 the town’s fate was sealed. Jarrow was reliant on Palmers for work and almost 80% of the town became unemployed.

Jarrow’s Council decided to organise a Crusade and walk to London to make the government aware of the town’s plight. On Monday October 5th 1936 two hundred men left Jarrow and walked into immortality.

The Jarrow ‘March,’ as it’s known in the town, had leaders with Irish and Scottish connections: Symonds, Scullion, Hanlon and Riley. A trawl through the list of marchers underlines this: Connolly, Flynn, Flannery, Joyce, and my uncle Johnny, reflecting the immigration into the town.

Sadly none of the original marchers are alive today but one direct connection we do have are the letters written between Con Shields and his late father who was one of the cook’s on the march. The letters are one of the most heart- warming stories of the March and the late Con Shields re-tells his tale with passion and enthusiasm.

Matt Perry, writer and historian in his book, ‘The Jarrow Crusade: Protest and Legend’ gives a clear account of the Crusade and its impact at the time and to this day. He also looks at Ellen Wilkinson’s contribution to the crusade and her life and times.

The name we associate more than any other with the Crusade is that of the town’s MP, Ellen Wilkinson. ‘Fiery’, ‘firebrand’, ‘Wee Ellen’, all have been used to describe one of the twentieth century’s most charismatic female politicians.

Sometimes it seems that the past never leaves Jarrow but what I do know is that we need to remember two Jarrow voices: William Jobling and the Jarrow Crusade.

In the next ‘Letters from Jarrow’ post we look at the background of the people involved in the march and how it is still important to the town today.