Docherty talks about his life from being doorman, club promoter and band manager. He remembers some of the big names that he attracted to Sunderland’s Bay Hotel

’The door leading to Marc Bolan’s dressing room was jammed with female admirers desperate to meet him. Some were crying with emotion. Others waited to meet their new heroes, Free, especially Paul Rodgers.

I’d never experienced female adulation of this intensity and found it impossible to empty The Bay that night’.

Docherty fills the book with stories about bands on their way to making it, and groups already there, but next he needed a bigger venue….

’During negotiations involved in moving to The Locarno, there were important hurdles to overcome. The first was the name. Over in the States were two highly respected venues called Filmore West and East.

I unashamedly plagiarised the name by renaming the Sunderland Locarno, The Fillmore North, on the night I hired it. Whether I could persuade the best groups to appear was in the lap of the Gods’.

He did – and the book contains a chronology of gigs that Geoff promoted from the Bay Hotel – Pink Floyd, Black Sabbath and The Who – to the Locarno – T.Rex, Mott the Hoople, Kinks and Bowie – admission and price paid for the act are included in the details, £150 for Bowie and 10 shilling to get in. 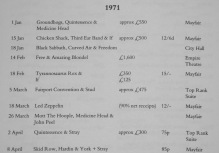 After a visit to a local nightclub, Annabels, he spotted a band who were playing and ended up being their manager…

Docherty gives great detail of the meeting with Peter Grant and the subsequent Newcastle Mayfair booking of Led Zeppelin on the 18th March 1971.

Not short on anecdotes and how the music world affected his personal life, Rock at the Sharp End is a must read for any fan of North East music.