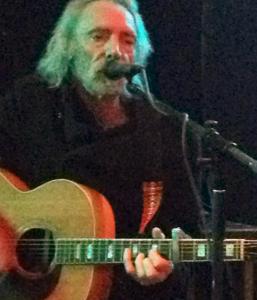 I first picked up a guitar when I was twelve years old. My influences were Lonnie Donegan, Buddy Holly, Beatles, Bob Dylan and Leonard Cohen.

My first gig was in 1964 at The Portland Hotel in Ashington, Northumberland. After that it was gigs in clubs, pubs and village halls.

What band were you playing in then ?

Played in a band called Halfbreed and the line-up was Bill Elliot, Colin Mason, Les Connolly, Tom Farrier and Bob Purvis – who was a non- playing songwriter.

I was a member of the band until 1974 when things happened, but unfortunately the group split. Bob and Billy went on to become Splinter who were famous for the single Costafine Town that was on George Harrison’s label Dark Horse Records.

What was your experiences in a recording studio ?

In 1971 we had signed to Apple records and the first time in a studio we recorded demos for The Beatles company. We did an eight track demo with George Martin and Mal Evans as producers. I have a copy of the tracks, they have been cleaned up ready for further work.

My first album was recorded in 1987, that was Full Circle. The studio was Baker Street in Jarrow. It was run by Howard Baker who used to be vocalist with Warbeck.

I’ve recorded a couple more albums in various North East studio’s since then, like The Cluny. The latest was in 2016.

Have you any road stories ?

I was playing a gig when my guitar touched the mic stand, next thing I knew I woke up in the hospital. There was a fault in the electrical system – I must have lit up like a Christmas tree.

We were rehearsing for a gig at the Marquee club in London when my amp blew up. The Beatles roadie Mal Evans sent our roadies round to Apple to pick up an amp. They came back with John Lennon’s gear – a 200 watt Marshal amp and two Sunn cabinets. One of the cabinets had a revolving speaker, that was an insight into John’s sound.

What are you doing now ?

After my mother’s death I came out to Spain to clear my head, write a book and record a new album which I have now finished. My book is finished and is now being proofread and checked for grammar plus just waiting on the artwork.

What does music mean to you ?

Music has been with me most of my life I hope it will still be there after everything and everyone has gone.