Hanging on my wall is a fairly large (27 x 22inch) painting printed on wood – Industrial Landscape, Ashton under Lyme 1952 by L. S. Lowry. The original is in Bradford Art Gallery and Museum.

I bought it in a charity shop a couple of years ago, the colours are faded as the previous owner must have placed it in direct sunlight, but still a bargain at £7.

When I first saw it I recognised the style as a Lowry – I like how he stretches everything – chimneys, buildings and people, the flat look with no shadows and how the factories fade in the background – capturing the heart and scale of industry. 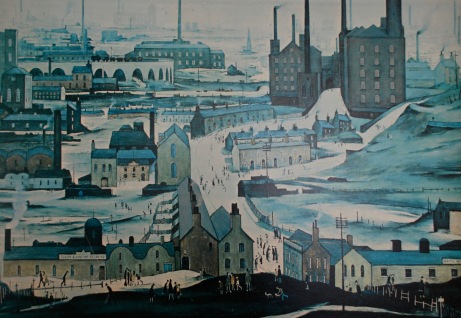 During the ‘60s Lowry visited Sunderland and surrounding areas where he produced a number of oil paintings and sketches. In South Shields he produced The Ferry in 1967. After his visit the painting went on display in the art gallery in Sunderland.

Bill Clark, owner of the Clark Art gallery in Cheshire, bought the painting in 2010. He said: ‘Lowry was entranced by the North East and particularly by South Shields. ’The Ferry’ is one of the stand-out pieces he produced of the area in the 1960s’.

Lowry used to spend short breaks at the Seaburn Hotel near Sunderland, painting and sketching scenes of the beach and nearby ports.

The River Wear would be the closest to his hotel but in one sketch Tanker Entering the Tyne is a ship sailing around what could be the view from Comical Corner on the riverside near the boat builder’s yards on Wapping Street, South Shields.

If Lowry was in Shields, is there a record of his visit ?

Today’s view of the area known as Comical Corner on the river Tyne. North Shields fish quay in the background.

Born on 1st November 1887 Lawrence Stephen Lowry is on the 1911 census living at 119a Station Road, Pendlebury, Lancashire with his parents Robert, an estate agents’ clerk, and Elizabeth.

Lucy England, and a few years later 23-year-old Alice Powell were employed by the family as domestic servants to help around the house as his mother Elizabeth had become bed ridden and dependent on her son. His father Robert died in 1932.

Lawrence worked through the day as a rent collector, then when he got home cared for his mother, only leaving time to paint through the night.

Lowry painted everyday scenes that he saw around him in England’s industrial North. ‘I never worked in a mill, it wasn’t a job I would of liked. Starting at 6 in the morning and finishing half past 5 at night. But I wanted to put the industrial scene on the map’ he said in a BBC interview in 1975.

He spent about ten years in Art schools in Salford learning classical techniques, and though he focused on industrial scenes he produced a number of seascapes and portraits using simple materials and colours.

He had small exhibitions, and his work was being noticed, but it wasn’t until aged 52 that his work was acclaimed. His mother never saw his success as she died in 1939, it deeply affected him and his work.

The scenes he painted where full of people haunted with anger and pain.

Due to class snobbery his work wasn’t recognised by the self-appointed art elite in the south. The Tate Gallery held some of his work in their basement for decades, but it wasn’t until 2013 when they eventually held a Lowry exhibition.

Lowry turned down honours, O.B.E, C.B.E and a knighthood – ‘meaningless in the absence of mother’. He retired from being a rent collector at 65 and during this time visited the North East still making sketches of what he could see around him.

On 23rd February 1976 Lowry died of pneumonia at the age of 88. He had produced over 1,000 paintings and drawings and today there is an art gallery in Salford named after him housing the largest collection of his work.

The world record sale for one of his paintings was for over £5 million paid for The Football Match.