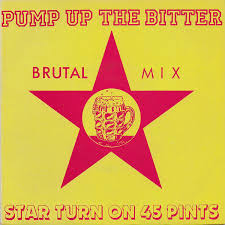 ‘Sky High’ by Jigsaw or Kim Carnes ‘Bette Davis Eyes’ are classic pop songs built on great hooks or a chorus – poptastic bubblegum made for radio. In the same bracket is the ‘70s hit ‘Back Where We Started From’ reaching number 8 in the UK charts and number 2 in the USA, an international song co-written by a lad from South Shields – not bad for a Sand Dancer.

A quick rundown of the career of singer/songwriter J. Vincent Edwards tells us he was born in 1947 and went on to make a number of records including the hit novelty song ‘Pump Up the Bitter’ in 1988.

I came across Vinny when I was reading the excellent blog ‘Ready Steady Gone’, authored by Roger Smith. He wrote that Vinny was born only 5 minutes away from the beach – a real Sand Dancer – if you’re not familiar with the term it refers to a native of South Shields.

Thanks to Roger I received an email from Vinny, and with correspondence over the next few days plus checking his songs on You Tube, a colourful picture of his music career emerged…Although I don’t live in the UK now I was born in Shortridge Street just off Ocean Road near the beach – I used to play there and the Marine Park – they were bloody cold!

I remember when I was 10 year old I got into music after hearing the American singer Sam Cooke – I was in! If God ever wanted to become a recording artist he would use the voice of Sam Cooke.

My first band was The Tyneside Skiffle Group featuring Vic Malcolm who was also in The Stormers and later started Geordie who had chart success. Then I was in The Invictors and then The Answers. I remember my audition for the Invictors at Tyne Dock Youth Club, I sang Stay by Maurice Williams & the Zodiacs – blew them away !

In my early years we played all the North East working mens clubs. If you check out a group I was in during the ‘80s called Star Turn on 45 Pints – that was all based on playing the clubs especially Brigham & Cowans in South Shields. In fact we filmed some of the video there for our hit Pump Up the Bitter.

Did you have a manager or agent ? In the late ‘60s we were represented by Richard Harris and his company Limbridge Music. This was the time we moved to London and France with a band called The Answers who were signed to American label Colombia. 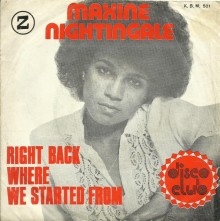 ‘Right Back Where We Started From’ by British soul singer Maxine Nightingale was a hit in 1976, how did it come about ? I wrote that in Austria in 1972 while my darling wife Ursulla Skalla was in front of the mirror drying her hair! Thing was I didn’t have a title until one day I met an old mate and songwriter Pierre Tubbs and he came out with the title which fitted perfectly. We finished writing the song the next day when we were in his car driving over to Hammersmith Hospital to meet his wife who was having a baby!

Where did you take the song next ? Well Pierre worked at United Artists record company and Maxine Nightingale was around at this time, I knew her from our work in the musical Hair. We thought about a duet first but I had just signed to Privit Stock Records so I produced it myself and added backing vocals. I insisted that Maxine got royalties from the song and not just a session fee.

But I loved the recording studio, all the musicians we got in were wonderful. We appeared on TV all over the world, then with different songs from Hair, a song called Thanks plus a few others – there was a lot and I loved it all!

I was always asked to sign for various record companies they must have thought I was somebody else (laughs).

Check out Vinny’s impressive release of singles and albums throughout his career on CBS, United Artists, Hans, Pye, Polydor and many other record labels at discogs.

What does music mean to you ? Everything, fun, humanity, love and peace – just everything really.

What are you doing now ?  I’m caring for my wife’s parents, drinking good German beer and waiting for the Labour Party to get back in!

I’ll leave you with this song I wrote Keep on Trying from 1974, my band at the time The Usual Suspects played on we also had on bass the AC/DC and Def Leppard producer Mutt Lange – who hasn’t he produced, and he produced our single – happy days! Why not check it out on You Tube.